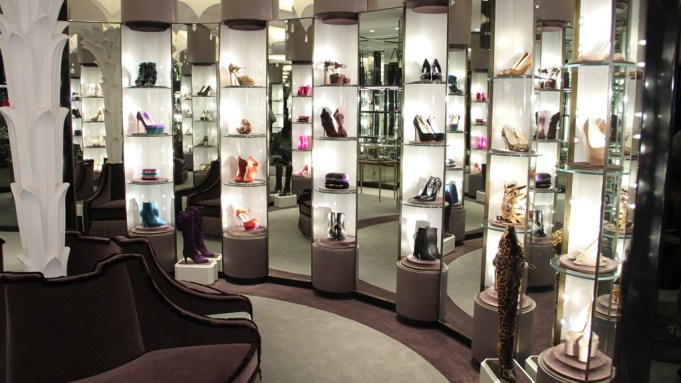 NEW YORK — Brian Atwood has a place to call his own.

The designer’s first shop will open at 655 Madison Ave. today — the culmination of a series of significant initiatives since The Jones Group Inc. acquired the company in June. Last month saw the launch of a U.S. e-commerce-enabled site, brianatwood.com (a global site will roll out early next year), as well as an ad campaign shot by Mert Alas and Marcus Piggott.

“It’s Old Hollywood, it’s a posh salon. It’s the chicest haven for women who love shoes,” Atwood told WWD on a tour of the 1,450-square-foot store Thursday, picking up a pair of burgundy and black leopard-print, platform water-snake sandals. “Can we make #chichaven the store’s hashtag?”

The designer himself is active on Twitter and Instagram, and keeping in line with his dedication to the digital space, five styles in the store will contain QR codes so customers can scan the shoes to access “30-second romance” from Atwood. He will continue to do this with his favorite styles each season.

An energetic Atwood, who’s been at the store since 7 a.m., wants to start at the beginning.

“It’s not exactly minimal. It’s like a Fabergé egg,” the designer said, leading the way to a limestone facade arch at the entrance of the boutique. Beside it are rich purple Venetian-plaster walls, marble quartz floors, gray velvet seating with rounded arms and vitrines cut like gems. Within these vitrines are items that can be found in the “Vault” section of the designer’s digital flagship, which sells shoes and handbags at “hyperluxe” price points, including a $4,500 made-to-order pair of 165-mm Swarovski Elements platform pumps and a $3,400 black leather minaudière with gold inlaid chains and spikes.

The space, designed by William Sofield, will carry the largest selection of the designer’s shoes and handbags in the world. Divided into four sections — or salons, as Atwood prefers to call them — two house designer shoes, and there’s one each for contemporary B Brian Atwood footwear and handbags.

Every pair of collection shoes sold at the store has a small gold “655 Madison” plaque on the shank of the sole — giving a unique added element to consumers who opt to shop at the store. Atwood said this is something he plans to implement at each of his stores as they open.

By 2017, Atwood plans to have opened 12 additional stores, with the next opening in 2013. He lists places such as Los Angeles; São Paulo, Brazil; London, Russia, and Asia as targets for future doors — noting that the fastest-growing markets for the brand are South America and Russia.

Additionally, Atwood would like to grow the handbag portion of his business. Styles range from simple python envelope clutches to a fuchsia calf-hair shoulder bag with a red leather strap. Atwood hopes this store will help him understand what the client wants, and gravitates to, in the category.

The next category for the designer will be jewelry. In November, Atwood will introduce a six-piece capsule jewelry collection containing cuffs, wrap bracelets and chokers (each piece comes in gold or hematite) to be sold exclusively at the Madison Avenue store and brianatwood.com.