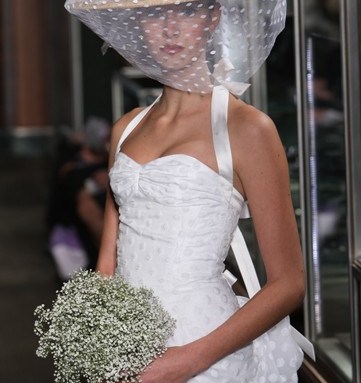 Rather than partake in the new nationwide pastime of bemoaning the economy, bridal designers have jumped into the new season with ingenuity and, in some cases, razored prices.

It’s debatable just how recession-proof the wedding business is. Several bridal executives noted wedding budgets are being tightened, brides are saving up and buying closer to the actual day and the ongoing popularity of destination weddings is now even more appealing from a price standpoint. In regards to the latter, many resorts are offering special rates or promotions due to Americans’ reluctancy to get on a plane, and out-of-town weddings tend to generate more declined invitations due to the cost of travel.

For brands that only do bridal, taking a straight-to-it strategy is essential. But even designers with an array of products are diving into the category with gusto and elegant touches, knowing many women will spend several thousand dollars for the perfect dress. And those four- or five-digit purchases could certainly help compensate for all the sweaters, perfume and “It” bags shoppers have refrained from buying in recent months.

Event planner David Monn, who last week transformed his West 27th Street offices into a wedding showcase, seemed to capture the market’s can-do outlook. “I am tired of people talking about doing things on the cheap. To say what you can’t have only solidifies things. That is obvious. The question is: What can you do differently?” he said. “I have always believed what Richard Gump said, ‘Good taste costs no more.”

Vera Wang slashed select price points by 40 to 50 percent, serving up a new opening retail price point of $3,600 compared with $5,500 last year. Needless to say, retailers’ jaws dropped, Wang said, and then many wrote orders. But her top five selling styles, in terms of dollar sales, are still from the high-end Luxe collection. In fact, the most popular styles retail from $8,500 to $13,900. Ultimately, Wang wants brides to be allured by the design of whatever dress appeals to them, not the price tag. The same is true of the other products she designs.

“The same amount of thought goes into every line I do. I do that out of respect and respect to the fashion industry. I always try to think intelligently,” she said.

For her April 5 show at Tiffany & Co.’s Fifth Avenue flagship, Carolina Herrera created “an homage to classic painters” such as Claude Monet, Edouard Manet, Edgar Degas, Gustav Klimt and Jacques Louis David by designing dresses inspired by fashion featured in their art. Herrera described the extremely detailed process as “fun and interesting,” despite the task of modernizing what in some cases was 18th century work. Naming each of the 12 gowns after an artist and preparing for the show made for an amusing atmosphere in Herrera’s showroom. “Someone would say, ‘Where is Diego Velasquez?’”

As for the current state of affairs in the U.S. and abroad, Herrera said, “There is a bigger challenge. You have to be creative and be sure you want to show something special.”

After his show last week, Oscar de la Renta said his overall business is doing “extremely well,” so his bridal business is not serving as a buoy. “You just have to do your best even though the economy is difficult. It is not insurmountable,” he said, adding happy occasions such as weddings give shoppers reason to indulge.

Monique Lhuillier made the most of The London Hotel’s penthouse by showcasing her bridal collection, a new bridesmaid line and just-released licensed bedding. She set the retail prices of the bridesmaid dresses at between $250 and $390 with cost-conscious consumers in mind. Not wanting to undercut retailers that carry her more expensive wedding gowns, the designer decided to sell the bridesmaid dresses solely on her Web site for the time being.

In what is perhaps an indication of the state of the market, her two best-selling wedding gowns last week were the most expensive style at $8,000 retail and the least expensive one at $3,495 — about $500 cheaper than last’s season’s opening price point. For the first time, she added a little sparkle embellishment in a very understated way to help retailers justify the price tag on more expensive styles.

To play up brides’ individuality, Junko Yoshioka collaborated with astrologist Susan Miller to develop dresses inspired by the various astrological signs. Miller was on hand when the collection, which included coordinated floral bouquets by Tokyo’s Florist Hanna, was presented at Yoshioka’s SoHo showroom in Manhattan. The designer could be on to something if demand for Miller’s expertise is any indication. In addition to having six million unique visitors to her Astrologyzone.com Web site each month, Miller has seen an uptick in corporate clients such as Cole-Haan and Apple.

Wedding planner Donnie Brown, who is in his ninth season in “Whose Wedding Is It Anyway?” a reality show on the Style network, does not read astrological signs, but he has noticed changes in bridal clients’ behavior. He isn’t convinced that designers will be successful in bringing back short wedding dresses, but many of his clients are buying short white dresses for the reception or engagement parties. “Most brides want something more formal. We’re seeing a few ballerina styles, and sheaths are always in with women with perfect bodies,” said Brown, adding St. Pucchi is a popular label with many of his clients.

Rather than spend less on each guest, many brides are opting to have smaller weddings or destination weddings. Ritz-Carlton’s Caribbean and Mexican properties have drummed up an exclusive offer for a wedding ceremony and free three-night first anniversary stay. On St. Lucia, at Calabash Cove, a new oceanfront property, couples who book 10 rooms for a wedding will receive a complimentary room and a free upgrade for themselves. Charleston Place also offers a complimentary first anniversary stay. Thrifty or skittish brides-to-be will find an elopement package at the Inn at Perry Cabin.

There were also a few firsts for bridal manufacturers. J.Mendel has started selling its wedding dresses to select specialty stores in addition to its own Madison Avenue and Chicago boutiques. President and chief operating officer Susan Sokol said, “We look at this business as an opportunity that we haven’t totally leveraged in the past.”

Alfred Angelo, a 75-year-old bridal label, launched a Recessionista collection, a nine-piece line with a starting retail price of $298 that ships to stores this month, and, for the first time, select J. Crew stores are selling styles from its bridal collection, which until now was only available online. Shoppers can schedule complementary consultations with a new bridal expert who will help them select wedding gowns, bridal party attire and honeymoon clothing. J. Crew is also planning its first bridal trunk show. Priscilla of Boston teamed up with Brides.com to provide a live video stream of its April 4 fashion show. Anne Bowen debuted her first bridal collection and collaborated with Vanessa Noel for footwear for a runway show at The Plaza. Douglas Hannant showed his collection in the hotel’s Palm Court, where passersby formed an unexpected standing audience.

Even event planner Monn, who displayed an ethereal table setting featuring a $9 woven crepe paper tablecloth, $30 white stock floral centerpieces and strands of iridescent butterflies, tried his hand at a strapless wedding gown made from the paper needed to make Fortuny pleats. The gown also had a tulle underskirt. (A necktie in a nearby tuxedo ensemble was made from a Bounty paper towel.)

“Beauty isn’t about something that comes with a price tag first,” he explained. “Hopefully, people will feel inspired and will feel good. Weddings give people an excuse for a moment to feel good.”