Bridal Designers Set Their Own Path

Instead of continuing along as a stepchild of sorts of the fashion industry, they seem to be making their businesses more of-the-moment. 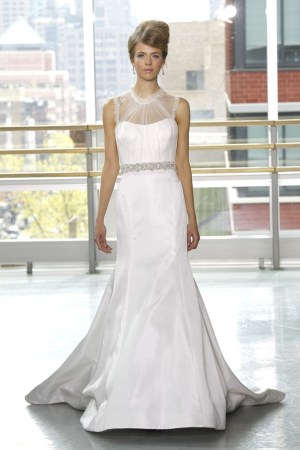 NEW YORK — Instead of continuing along as a stepchild of sorts of the fashion industry, bridal designers seem to be making their businesses more of-the-moment.

Beyond the more timely and less princess-y wedding gowns that were seen in recent bridal runway shows and presentations, there seemed to be a more relaxed yet still purposeful way of doing things. Instead of just showing their latest collections, designers showed off their multitasking skills.

After Lela Rose casually walked editors through her fall collection in her TriBeCa apartment, guests lingered over homemade basil passion fruit iced tea, while photographers took turns shooting models against a burlap drop cloth. Throughout the bridal market, there were more than a few when-duty-calls moments. For the first time in her career, Vera Wang had to take a pass on attending her own show. After finalizing the run of show, hair and makeup a few days beforehand, the designer headed to Paris for a few business meetings. Back in her New York space, guests saw a memorable show with an assortment of dresses in red. An hour later at Badgley Mischka, an Asia-based TV crew was first in line to interview designers Mark Badgley and James Mischka, who opened a Shanghai boutique last year and are actively building sales in Asia.

Oscar de la Renta was another designer who showed gowns in such bold hues as red and blue. The designer also sent flower girls down the runway wearing his designs, which will be sold as part of his new children’s wear collection.

While waiting to be seated for Marchesa’s show, guests caught a glimpse of what lay ahead — as models passed by glass doors finishing up their look book shoot. And showgoers couldn’t help but see the Marchesa china that was set up on a small table near the entrance. While 30 American Express cardholders filed in looking for their seats, Marchesa’s newly named director of bridal, Jessica Spazok, enthused about the collection, noting how 55 stores had reviewed it in recent days. (The AmEx members stayed behind for a trunk show, having made advance deposits for purchases, as is the norm.)

In her show notes, Carolina Herrera specifically said, “This is not a collection that is occupied by trends, but one with more of a personal purpose. Each gown is designed with a specific woman in mind and the intention of creating something that represents her personal style.”

Before Herrera’s show at her 505 Seventh Avenue address, president Caroline Brown was already envisioning next season’s show, when guests will be able to mingle on a garden terrace in the company’s soon-to-be renovated space. (At the designer’s request, each staffer will have a window with the new set-up.) Another nice touch was more evident —when Herrera took her bow she had the hand of creative director Hervé Pierre, lest there be any question that one person can do every single thing.

Monique Lhuillier used her new East 25th Street offices to present her latest gowns, as well as her tabletop offerings. Through a deal with Waterford, the designer will introduce chandeliers when her flagship opens at 19 East 71st Street in July.

Reem Acra showed off her dexterity in other ways. On their final runway spin, models momentarily stood in place while several of them removed detachable pieces of their dresses to show off different dresses altogether. Afterwards, Acra walked down the runway pumping her arms overhead.

She wasn’t alone in wanting her message to be heard. Guests at Isaac Mizrahi’s first show at Kleinfeld were given cards with their seat assignment on one side and tweeting instructions on the other. Earlier in the week at his presentation at Kleinfeld, Dennis Basso personally shepherded press through his collection. Since the line debuted in October, one of his dresses has sold more than 400 units making it one of the store’s bestsellers. Brides are so keen to have it that the company bumped up the price by $300 to $3,100.

And shoppers in Asia are willing to spend even more. After the Rivini show, Younga Lee, owner of Beyond the Dress in Seoul, said her customers will spend $5,000 for wedding gowns. “It is the one time in their whole life when they will be the focus,” she said. “But they need a little guidance. What they imagine for themselves might not be a good match depending on their body type.”

As soon as models took their final turn at Rivini’s show at Alvin Ailey’s Midtown dance space, they shot the spring look book. The husband-and-wife team behind the label, Rita Vinieris and Tony Giancola, who acts as president, were among the well-wishers who turned up later in the week at Martha Stewart Weddings’ Darcy Miller’s uptown apartment to celebrate Mark Ingram’s 10th anniversary in business. Badgley, Mischka, Marchesa’s Keren Craig, Angel Sanchez, Anne Barge, Elizabeth Fillmore and Amsale Aberra were among the designers chatting in the room. While the event was technically a work one, like other occasions during market week, the mood was less than formal. Several guests chatted excitedly about how Angelina Jolie’s wedding to Brad Pitt will help business. (Rivini was ahead of the game using Jolie-inspired models.) “It’s going to be huge,” Sanchez said.