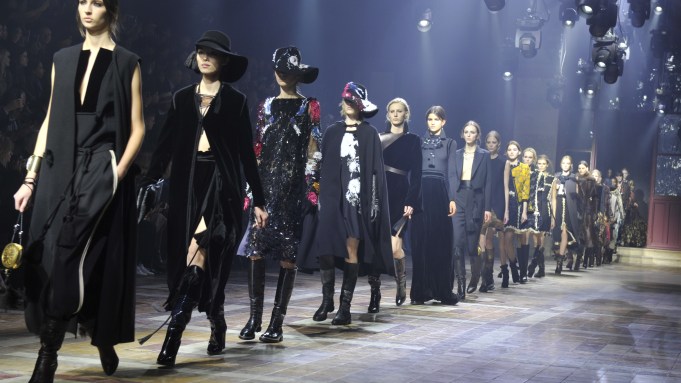 The Alber Elbaz news came fast and hard. He’s out at Lanvin. In the statement he released, he made no bones about why. His exit, he wrote, came “on the decision of the company’s majority shareholder,” Shaw-Lan Wang, whom he didn’t mention by name.

And he celebrated the people with whom he’s worked. “I wish to express my gratitude and warm thoughts to all those who have worked with me passionately on the revival of Lanvin over the past 14 years,” he wrote. They, in turn got behind him in a major way — when’s the last time you heard of the rank-and-file at a fashion brand going Norma Rae when the designer left? But that’s what they did, and with good reason. It’s fair to say that Elbaz is beloved both within Lanvin and across fashion, one of those rare people about whom one never hears a bad word.

Still, there were signs of discord. Rumors percolated that Elbaz didn’t get on with Michèle Huiban, the chief executive officer brought in by Wang. Huiban, in turn, replaced Lanvin’s longtime p.r. director and Elbaz supporter, Hania Destelle. And there were indications that after a long northward trajectory, sales had stalled. But clearly, the biggest conflict was between Elbaz and Wang. Prior to buying Lanvin, Wang, a Taiwanese publishing mogul, had no real experience in the fashion industry. My colleague Miles Socha reported that according to sources, Elbaz, who holds an equity stake, wanted her to sell to an owner better equipped to capitalize on the foundation now in place, but that she’s digging in her heels, seeking a very high price and wants a buyer she knows.

Last week, while accepting his Superstar award at Fashion Group International’s Night of Stars, Elbaz gave a speech that had everyone talking — at the time and especially after news of his departure broke. Explaining that he would not keep within the requested two-minute speech limit, he said he’d told the organizers, “‘I need more time.’ And I think everybody in fashion these days needs just a little more time.”

He hadn’t come to those words in a sudden pique. Elbaz is both an emotional designer and a thoughtful one. A preshow preview with him is more that a quick perusal of seven dresses on a rack. When we met at his Lanvin studio before his last show, many of the same thoughts were percolating. So much so that he’d considered not showing me any clothes at all, thinking maybe he’d just discuss what was on his mind. Ultimately, he decided to do both.

“The more I talk with people, I see everybody looking for a change, everybody…” he said.

“Is this industry only about numbers and shows? That’s a question. And we, the designers, did we change? Our title first was designer and then, chief creative director, because we have to be creative, we have to direct. Now we have a title, it’s image-maker. Image became a huge part of our job. Now, when you are a designer and you went to a fashion school, FIT or Parsons or the Royal College, you learned about cuts and the body and innovation and about newness, and this is what we were trained to do. We did not go to a school of communication. We went to a school of fashion. This is what we learned in fashion school. We didn’t learn business and we didn’t have concepts of communication.”

Elbaz went on to say that fashion’s entertainment element seems to be encroaching on what should be its primary creative concern. “Today, I have a feeling that people come to see a show, or they see a show on the Internet, and they’re looking for entertainment,” he said. “Are we turning into an entertainment business? Is that the fashion business? I’m questioning. I’m not criticizing, I’m only reflecting. I feel that today in order to have a voice, it has to be loud. You have to be loud, otherwise you cannot exist.”

Must a house and a brand shout merely to exist? Perhaps. Yet reticence was never an issue for Elbaz. Though not flashy in the common or coarse sense, his work incorporates an element of chic flamboyance that a woman can embrace if she wants to. That’s one of his great strengths as a designer — he can do many things, but always with a clear and distinct signature, and always grounded in his devotion to addressing the needs of real women (albeit extremely well-heeled) who have to get dressed. While his shows were exquisitely editorial in presentation, it was impossible to take in an Alber show and not react as a woman first and fashion professional second. These are complicated times in fashion. As Elbaz suggested, the confusion and tension are palpable, sprung from a sense of encroaching upheaval yet with no corresponding vision of what an emergent template might look like. The escalation of global fascination in fashion has been tremendous, fueled by the convergent forces of the digital explosion and the opening of new markets that 20 years ago didn’t exist in the Western business psyche. In response, creative and business hopefuls have flooded the space — including many of remarkable talent. It’s inevitable with so many now in the game, market shares for most, up to and including the most powerful, are likely to suffer. At the same time, the recent trend of major designer exits (Raf Simons from Dior; Alexander Wang from Balenciaga) will impact how consumers relate to the brands they buy and how incoming designers view their jobs.

Fashion is a discipline of passion. In recent history, most designers who have been signed by a major house have put their hearts and souls into their work with the same intensity as if their own names were on the door. Even within that context, Elbaz’s Lanvin tenure is particularly poignant; his refined, highly developed mark on the house stands out. Most fashion-aware people today — those who work in the industry as well as serious shoppers and others who might buy little but consume a lot in terms of fashion entertainment — have little or no concept of Jeanne Lanvin. They may recall a flacon of Arpege on Grandmother’s vanity (and Arpege isn’t Chanel No.5) — but beyond that, there is no current populist memory of Jeanne Lanvin. Yes, a few professional fashion historians and informed amateur buffs can wax informative about draping and languid silhouettes, but most people don’t know and don’t care.

At the richest, savviest level, the fashion-buying population knows the Chanel codes, and to a lesser degree, those of Dior. People know a Pucci print because how could you not — it hits you in the face. Balenciaga? Cristòbal Balenciaga’s work is the fashion-knowledge equivalent of Plato’s Republic. You know you should know it in-depth, but unless you did Columbia’s freshman core, you’ve probably skimmed, at best.

What the fashion-interested do know of today’s Lanvin is Alber Elbaz — period. His work is our concept of the brand: the draping; his way of turning a mannish tweed into a feminine swirl; the bold use of jewelry and baublelike embroideries; the couturelike finishing; most importantly, the core tenant that chic and ease are not antithetical concepts. Those are Alber’s concepts, Alber’s codes. Yes, he linked back to elements worked by Jeanne Lanvin herself. But who cares?

As the consumer sees it, Lanvin and Elbaz are synonymous. This will make finding the right successor all the more difficult. What’s an incoming designer to do? Throw out baby and bathwater, or build on something fabulous created by a gifted contemporary who will likely find a new employment situation as soon as he chooses, possibly an extremely high-profile one? If the former, a tall order. If the latter, one runs the risk of unfavorable comparison.

True, hiring a scorching, buzzy name wasn’t a problem for Balenciaga. But Alexander Wang’s three-year stint put “palate-cleanser” distance between the incoming Demna Gvasalia and Nicolas Ghesquière. More importantly, Balenciaga’s parent group, Kering, is one of the world’s two leading luxury groups, and gives every indication of having its act together. Lanvin, approaching the employment pool with far less business-side credibility, has begun to project disarray. Will Shaw-Lan Wang find a replacement for Elbaz? Of course, and probably one with plenty of promise — there are legions of more designers than there are high-profile jobs out there.

Yet Alber’s is an imposing shadow, not least because he found and charmed for the house a previously nonexistent customer, appealing to her not only with beautiful clothes, but with a genuine emotional connection. Now, he wonders if the industry continues to have her essential interests at heart, a consideration he will take to his next situation, whatever and wherever that might be. “How do we deal with all of it,” he wondered during our preview. “A question. Just a question.”