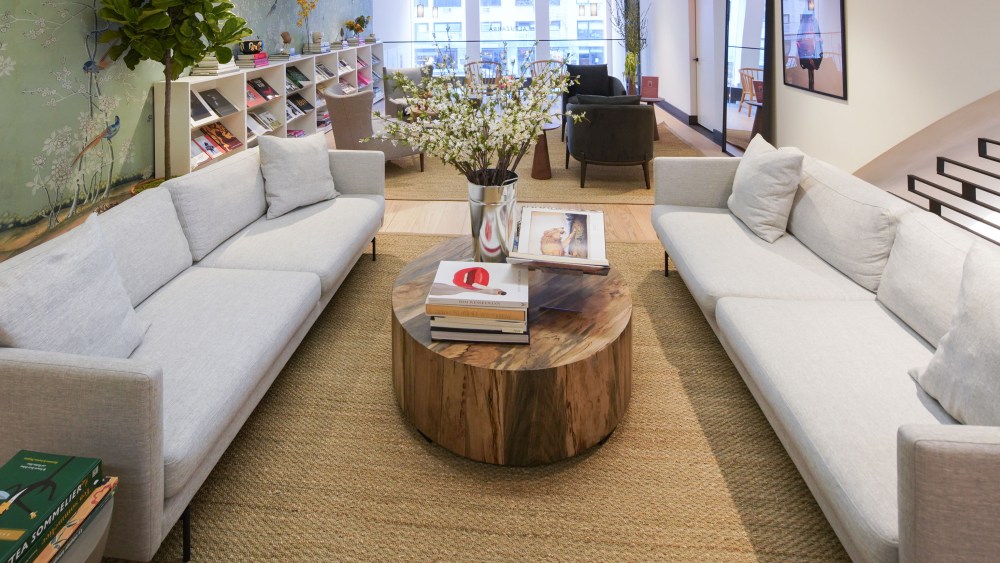 “True luxury today is to have a space to do nothing,” the designer says. He offers that assessment on a Wednesday evening walkthrough of his brand’s pop-up store at 956 Madison Avenue, opening today. The site most recently housed the Tomas Maier boutique, which closed with the dissolution of that brand by parent company Kering last year. Kering holds a minority stake in Altuzarra. The new pop-up will stay through March 29, after which a new tenant will take over the space, according to Altuzarra chief executive officer Karis Durmer.

There’s nothing unusual about chic, take-a-load-off sofas in upscale boutiques, but they’re usually within view of the merch — take it in and be tempted. Not so here. Instead, Altuzarra wanted to section off a part of the store as “a non-commerce space, a place for people to hang out.” It occupies the entire second floor of the 4,000-square-foot store (or almost; it abuts a fitting-room alcove), its cool-home vibe intended to replicate Altuzarra’s living room (if his living room had a 45-foot long wall covered by de Gournay wallpaper that makes indirect reference to a print featured in his pre-spring collection).

“A big part of the idea is to pull people into my world, to bring people into my living room,” Altuzarra says. “To offer people the opportunity to do nothing or to get inspired and read books or just hang out with their computer, that was something that really appealed to me. I feel like it’s a great way for people to get to know me personally,” he says.

“The Salon” features pale wood finishes, sofas covered in washed linen, and a woven leather chair in cognac. Altuzarra considers it his signature color, having emerged organically in his collections through the years. Some appointments were transferred from his home — vases, small objets, books. “These are really the books that inspire me, books that I’ve bought,” he says.

In truth, the space isn’t completely commerce-free. A wooden island vitrine houses trays featuring jewelry from CVC Stones, and some books, from Damiani, are available for sale. The tea is not. It’s free, in a customer-friendly collaboration with Palais des Thés. Another inviting extra: For part of the first two weeks, visitors can book a photo session with visual artist Christina Lonsdale, who works under the name Radiant Human. She will photograph your aura. (Seriously.)

The clothes and accessories are downstairs, with “The One That Got Away,” a capsule of 10 reissued items featured prominently in the front of the store, along with portraits of the 10 women who selected the pieces. A series of diagonally positioned freestanding metal racks runs the store’s length, and currently holds the pre-spring collection. In the back, a tall shelving unit displays Altuzarra’s new handbag, the Play bag. It’s a major initiative and the object of a moody, artful campaign by Ethan James Green, photos from which run up the stair wall. The bag also inspired the store’s most whimsical touch: a supersize version of the slouchy satchel (supersize enough to accommodate an average rear end) — made into a swing suspended from the ceiling.

The pop-up, capsule collection and Play bag are all markers of Altuzarra’s 10th anniversary, feted earlier this month with a party at Barneys New York hosted by the retailer’s ceo Daniella Vitale. Another marker: the foray in December into e-commerce. Together, the two retail initiatives represent a significant bump in the evolution of a brand that has, on one hand, always proceeded with caution, and on the other, steadfastly rejected bandwagon leaps. “It’s partially my personality and Karis’ personality,” Altuzarra says. “I think we’re very one-foot-in-front-of-the-other people.”

The designer and ceo always knew that at some point they would test the direct-to-consumer waters, but on their terms. “A pop-up is a great way for us to do that in a really special, fun, whimsical way,” Altuzarra says.

Durmer notes that, despite the short-term commitment to Madison Avenue, the message is that the Altuzarra brand is now serious about building a viable DTC component to its business, until now exclusively a wholesale model. “Regardless of the duration, we are making steps into retail,” she says. “We have product now that we are only offering direct from our own direct-to-consumer channels. It’s something you’ll continue to see us doing.”

For now, that product exclusivity focuses on the Play bag, available in two sizes and seven variations. The launch is independent of a fashion season, and the goal is a long-term hit. “We see it living forever,” Altuzarra says.

He approached its design process hoping to reflect a similar dynamic fusion of two distinct elements always apparent in his clothes. They are, he says, “very sensual, very feminine, but there’s a functionality as well. This mix of pragmatism and sensuality was something that I really wanted to convey through the process of working on this bag.”

So how does the bag, which projects a substantial, even rugged look, project sensuality? Altuzarra notes its soft, organic shape crossed with “a bondage-y element, with these straps on the perimeter, that you can tighten or you can loosen for this very undone look. It has this dichotomy between something very feminine and sensual but also almost dark and kind of sexy. That mix is something that I really loved.”

All well and good, but sexy and sensual alone wouldn’t have passed muster with a tough-to-please demographic. “I work with a lot of opinionated women,” Altuzarra says, and many of them test-drove the bag through several rounds of prototyping.

“He heard from a lot of us that there’s not been that much excitement or innovation around bags we can wear and use,” Durmer says. “A lot of handbag innovation [comes in] Instagram-friendly moments. He has given us a bag that looks sexy and cool and edgy, but we can also put stuff in and carry around and go about our day to day.”

A similarly sharp focus directed the design of the e-commerce site under the direction of Jodie Chan, director of marketing and communications. The site is visually sophisticated, easy to navigate, and there’s zero confusion as to its purpose. “This is our first step into becoming a retailer,” Durmer says. “We wanted to avoid clutter for sure. And to avoid the temptation of storytelling over highlighting the product for a shopper, [which is] something you fall back on quite easily. We approached the storytelling through the product.”

Early returns are impressive — to date, the site shipped to customers in 18 countries, many of whom have gravitated unexpectedly toward some of the brand’s priciest offerings, such as suitings.

While at least for now the plan is to keep the online selling experience focused acutely on product, having a physical store allows for less linear forms of expression. Case in point: the Radiant Human “residence.” Altuzarra met Lonsdale, whom he calls “an energy reader,” a few years ago on a shoot. He’s excited to share her work with shoppers — or non-shoppers who come just to hang out. He sees her presence as sort of a public service. “Radiant Human allows you to get to know yourself better as well,” he notes. “Whether you believe in it or not, it’s a very special moment when she’s photographing you.”

The idea of such a residency, certainly off-beat for Madison Avenue retail, fits into what draws Altuzarra and Durmer to the pop-up concept — the opportunity it affords for taking chances without really risking too much. “There’s a sense of urgency, but also a lot of flexibility,” Durmer says. “We can explore new ideas without having full commitment to them. We can be a little bit more fun in one moment or a little more experiential in another. If it were a 10-year lease, we might approach it differently.”

Altuzarra concurs. “It’s a finite amount of time, and to a certain degree, it’s experimental,” he says. “You’re inviting people to come now, to experience it now, because it’s not going to be there in two months.”