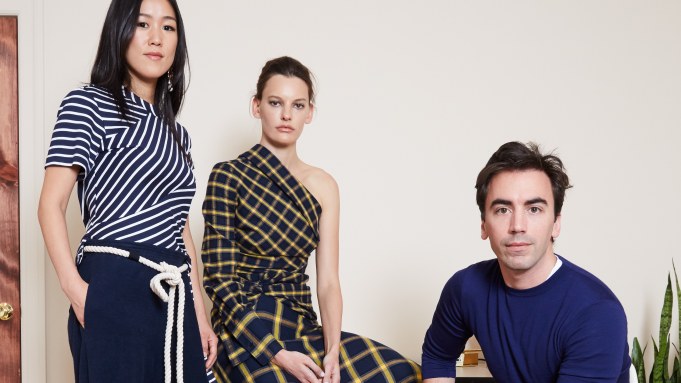 Taking to the runway for fall isn’t necessary. Taking the collection to Paris to sell absolutely is.

That’s the current mind-set at Monse, as for the second consecutive fall season the brand will forego a formal show. Instead, designers Laura Kim and Fernando Garcia have enlisted Kristian Schuller to shoot their look book, which will feature Amanda Murphy, and the brand will hold showroom appointments in New York and Paris.

While the designers remain undecided about whether to opt off the runway for spring as well, in something of a paradigm shift they will definitely stage a formal show for resort 2020.

At a time when brands increasingly opt to go their own way when it comes to presenting their collections, the Monse designers and chief executive officer Renee Prince Fillip thought long and hard about the traditional schedule vis-à-vis the realities of their business. Their no-show decision for fall took into consideration the complications of staging two shows in a single season, as Kim and Garcia have done most seasons since taking over the creative helm at Oscar de la Renta. An even bigger consideration: the frustrating reality of fall markdowns. They determined that the scale of the fall business doesn’t justify the allocation of resources involved in staging a show.

“I think, as a young brand, we can experiment with the way we show every season. We have that type of flexibility,” Garcia said when he, Kim and Prince Fillip sat for an interview last week at the brand’s office on Lower Broadway. “It’s fun to experiment, and it’s a time of growth,” he said, noting last fall’s video featuring Erin Wasson and Nicki Minaj, and how for pre-fall, Monse partnered with an animal rescue organization in shooting its look book.

Kim, who is sometimes portrayed in the press as the brand’s pragmatist to Garcia’s philosopher/romantic, put it differently. “It was a business decision,” she said. “We were not happy with how the markdown thing was happening in our industry. And we’re small enough that we can kind of go against it.” They’ve designed fall as a complete but tight collection without a need of runway flourish.

Kim noted another issue with fall as well: the challenges of designing pre-fall and fall in such close proximity — particularly for two brands — while working around international production schedules. “The Europeans close for Christmas and the Chinese factories were closed last week for Chinese New Year. So it’s a very short season. It’s literally a four-week development time,” she explained. She and Garcia find spring less problematic. They typically finish with fabrics before the Italian mills close for August, and then have a full four weeks to concentrate on the shows. “We can do two shows in the spring. But February…” she said.

Still, fall markdowns present a larger issue, and irk Kim on a personal level. “I felt bad for my whole team. They worked on it so hard and it’s getting marked down in four weeks,” she said, adding that this past fall, Prince Fillip pressured retailers to delay markdowns on Monse, which some did. Now the brand is looking to whittle its wholesale base and focus on partners who share its point of view.

“It’s not [about never] marking down,” Prince Fillip said. “It’s just shifting your markdown cadence, for instance, not marking down outerwear in November. At least mark it down in the next year, in early spring. The customer is shopping so much closer to need. And the retail industry really hasn’t shifted the markdown cadence, ever, so it doesn’t make sense anymore. There are retail partners that work with us that feel the same way we do and don’t want to mark down so early. We’re trying to do more and more exclusives with them.”

In addition, Monse is now itself a retailer; the brand launched e-commerce in December, a move Prince Fillip sees as another hedge against early markdowns. “I don’t mean to keep reiterating the situation, but [you need to] find the right retail partners that believe in what we believe in and believe in the fashion industry, and that we’re talking about art and appreciating the design and [enough to] continue at regular price. So as we perhaps part ways with retailers who don’t share that point of view, we have to be able to capture the customer as much as we can. We launched our web site not to compete with our retail partners, but knowing that we want to grow a regular-price business and we may have to do it ourselves.”

While the fall markdown machine is a bane to Monse’s team, resort is a major ray of sunshine — and where the bulk of the brand’s business gets written — approaching 65 percent of spring sales. In that light, a resort show makes all the sense in the world. “We’re excited to be doing a resort show,” Prince Fillip said. “That’s our best, most profitable season, the stores’ most profitable season. So we were like, ‘you know what? Let’s keep fall kind of a tight, fun collection, the icing on the cake. And let’s do a runway show for resort, which is really [profitable]. That way, the stores get editorial credit for their biggest purchase of the year.”

While the designers and ceo look forward to their resort show, they all agree that isn’t cast in stone, a definitive template for the future. They’re not even sure if they’ll follow their resort show with a runway effort for spring. They prefer to take a more fluid, “let’s see how it goes” approach. It’s been their m.o. all along.

“When we were starting Monse people would ask, ‘so, what’s your five-year plan?’” Garcia recalled. “We were like, ‘We don’t know what the five-week plan is.’”

Kim corrected him: “No, we planned, and nothing went with the plan.”

What they do know: It’s essential to take the fall collection to Paris to sell during that city’s fashion week. Prince Fillip noted that many international retailers aren’t making the trip to NYFW, a serious issue for Monse given the size of its international business. “We don’t always go to Paris. We go once in a while,” Prince Fillip said. “This season we were on the fence but [we learned] that so many European stores aren’t coming here. We have about 30 accounts not coming. So we really were like, ‘OK, we have to go to Paris.’” The brand will set up a showroom in an apartment in the 8th arrondisement.

Asked whether this is a new phenomenon and if those not coming previously made the trip, Prince Fillip estimated that about 65 percent have stopped coming recently. “When we started [four years ago] we didn’t go to Paris the first few seasons. These are accounts that we had from the beginning that used to come here.”

Of that international business, Monse’s largest market is Asia, particularly Hong Kong and China. Asked why the line has clicked so well there, the designers fall into their philosophical/pragmatic mode. “I think the experimental nature of Monse is in tune with Asian appeal or aesthetic,” Garcia said.

“I think because I’m Asian, I make sure all the clothes fit me. So maybe it’s a fit issue,” Kim countered, before acknowledging that design might have something to do with it. “Our design is a bit avant-garde, so that [might appeal].”

As for their creative process, it typically starts — how else? — by texting, sharing pictures they find on Instagram and discussing early ideas with their design team and fabric buyer. “The fabric really informs the collections, what is available in stock or what you can develop in the time that you have,” Garcia said. “And you just put all your ideas through this system and whatever comes out best is what we push forward. You have a lot of ideas as designers, but what comes out is the most perfectly realized concept that you photograph or fit on the model. Sometimes things don’t work.”

And sometimes in a partnership, creative differences arise. Garcia said that happens “all the time, and Laura usually wins.” Yet for their working style, coalescence typically trumps conflict. “Whenever we do agree on something,” Garcia added, “it pushes the product so much more forward than when one of us doesn’t like it.”