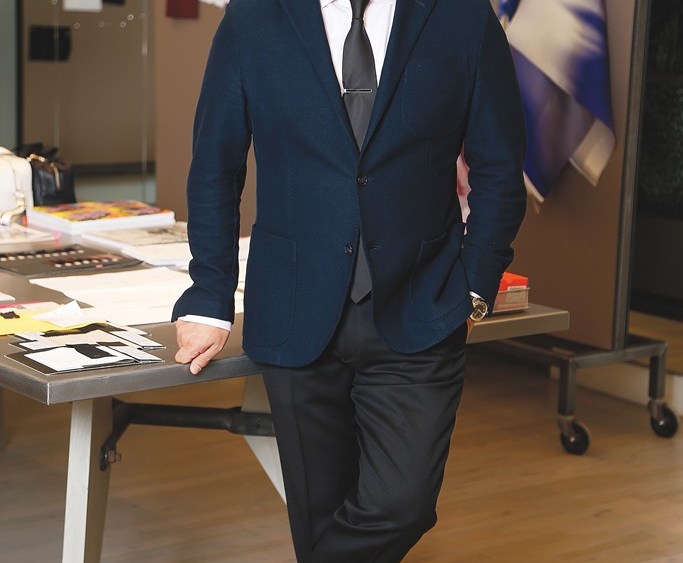 In fashion as elsewhere, the wunderkinds grow up. Sometimes the road to real adulthood, professional included, is something other than the early accolades promised.

Victor Alfaro, mid-Nineties fashion wunderkind, knows that. He knows that the lessons learned since launching his namesake business as the much-heralded boy wonder du jour will serve him well now, as he prepares to relaunch his brand with a designer-level collection for spring.

Alfaro discussed his new venture in his studio of the last 10 months — a chicly minimalist 6,000 square feet done in dark grays, white and the occasional well-chosen furniture piece, including a Wendell Castle purple fiberglass Nirvana chair in the lobby. (Alfaro’s twin bother, Pablo, has the other half of the pair.) Though neither the West 20th Street address nor the building itself is particularly grand, the space impresses, telegraphing nothing of a hard-knocks starting-over-at-50 (as of May 26th) message. Rather, this is the environment of someone engaging on his own terms — terms that include an aggressive approach, starting with shoes, bags and clothes at the designer level, and the addition of contemporary for fall 2014 and men’s shortly thereafter, probably fall 2015.

In pursuit of the right fabrics and production, Alfaro “went back to Italy,” and says the past three months have been “nothing short of a great experience.” He’s working on the pricing now, which will be comparable to “most Italian-made, high-end collections.” He expects to launch globally, drawing on relationships he built the first time around, including those with Neiman Marcus, Saks Fifth Avenue, Bergdorf Goodman, Barneys New York, Selfridges, Lane Crawford and Harvey Nichols. Also on his wish list, players from a category that was in its infancy when Alfaro exited the business: Net-a-porter and FarFetch.com.

Definitely not on his to-do list: hitting the runway. “No shows, ever again,” he says emphatically. “It’s stupid. I just don’t have a good taste about them. I think that for me, it would be distracting to the kind of product that I want to do now. It’s very geared toward stores and selling it. I think that when you do shows, it’s just by the dynamic of the shows [that] you do other things [than] what that true commercial line should be.”

After shuttering his business in 2003, the designer took a respite from fashion. He moved to Los Angeles, launched an art- and design-driven Web site, and eventually signed on to do a lifestyle lineup for Bon-Ton Stores, a relationship that suited him well and through which he learned a great deal about offering genuine chic at accessible prices. He hasn’t always longed to rejoin the high-end fashion fray.

Which begs the question, why now? “It feels right for me,” Alfaro says simply, sitting at a large Jean Prouvé table in his studio. “I wasn’t ready before. I wasn’t into it before. When, over the holidays in December, I had to sort of clean my brain out, it just felt like the right time to do it. I’m into it. I’m having a good time. And not only that, talking to a lot of friends who are in the industry, it is the right time for an American brand that has wearable clothes, per se.”

A clear pragmatism has always defined Alfaro’s aesthetic, now rendered in a deliberately body-conscious sensibility. It’s the result of first-hand, if anecdotal, research. “I have a lot of friends, girlfriends in New York City and L.A.,” he explains. “What’s happening now is the women who are buying luxury are also taking care of themselves. Detoxes and juicing. Working out. SoulCycle girls. The Tracy Anderson girls. They want clothes that fit that lifestyle. And so we’re spending a lot of time thinking about what those clothes can be. Everything has sort of an athletic [attitude], but a luxury, very refined feel to it.” He’s even naming the looks appropriately: Night Spinner, Chelsea Spinner, Whitney Spinner. There will be a strong seasonless current, with fabrics from leather to Neoprene, the end results of intense research.

Alfaro senses a need for his type of fashion: “I always did pretty, wearable clothes. That was the backbone of the brand.” He notes that a close friend, an unnamed “she” who’s “heavy in the industry, in the stores,” has been pushing for his return for three years. “She said, ‘Victor, there’s so much white space in the stores for the kind of clothes that you did.’”

Such wasn’t always the case. When Alfaro walked away from his company, it was due to an acrimonious break with his then-partner, Gilmar. In retrospect, signing with that firm was a big mistake — but tell that to a fashion-obsessed hopeful, who, two hours before collecting his CFDA Perry Ellis Award in 1994 at Lincoln Center, was transporting clothes from a storage facility to FedEx for shipment to stores.

“I signed the deal with Gilmar and we had offices all over the world. Showrooms. We had a structure. I thought I’d found the golden goose. I thought, ‘Oh, I can concentrate on doing the designs.’ And guess what? It all went into the toilet. It screwed everything up.…I was miserable. I knew in the first week. I got to Italy on a Friday and I knew that this is what it was going to be. And I stuck it out for four or five years. That’s who I am. I’m loyal. I wanted to make things work.”

Alfaro maintains that the clothes were never the problem, that until the end they continued to be well received by retailers. “It was the relationship to the partners that was unhealthy at best. All of us have done those things that are a statistic in fashion. We become a statistic.” Ultimately, he bought back his trademark in full.

The experience hasn’t soured him on seeking investment for his comeback venture, and he has been in talks with several suitors. He likens the process to dating, and admits to preferring a certain type — fashion, nay; finance, yea. “If you asked me three years ago, I didn’t even know these kinds of groups existed,” Alfaro says. “I think with the success of the Michaels [Kors] and the Torys [Burch] of the world — there’s so much money out there. It’s crazy.” He’s not interested in a quickie affair, nor will he act impulsively. “You just have to be very cautious, and understand what their objectives are. I’m talking to partners that are interested in it in the long run, that have a business plan for all of us to be clear about — their motives and my motives have to be the same. They have to be aligned.”

Excited as he is about his return to fashion, Alfaro knows the current landscape is a complicated one, difficult to negotiate with many more people than when he left. “The dynamics have changed,” he says. “Everyone wants to be famous tomorrow. The one thing I learned is that there’s no shortcuts in this industry. You have to work 10 years or 20 years. Look at Michael’s success. The guy has been at it thirtysomething years. He’s so deserving of it.”

Alfaro expects his own maturity and experience to serve him well. This includes his work for Bon-Ton, with whom he still has a home line, Casa Alfaro, for bedding, tabletop and holiday. His work there opened his eyes to the importance of looking beyond the realities of the designer customer. “We’ll nail it. We’ll nail the price; we’ll nail the look,” he says of his upcoming contemporary line, to be produced in the Far East. “This is a broader customer. It’s a wonderful experience [to address] that woman who still wants to look pretty and wants to have fashion and wants to look great.” Bon-Ton taught him “two things: That there’s no reason why you can’t have great things when you have a limited budget. That there’s a real world out there that’s interested in the same things that the woman who has [a higher disposal income] is interested in. I was interested in becoming a businessperson and not be so isolated with this luxury consumer. That sometimes can be very — what’s the word? — delusional and fictional.”

Hindsight has taught Alfaro that charting a too-specific course of expectations can be delusional, as well, and he has no intention of falling prey. While relaunching and nurturing Victor Alfaro the brand is definitely a long-term endeavor, he is unwilling to articulate specific goals. “What I’ve learned in the past is to not have that big of a script with your life. Because that’s when the disappointment comes through. Have no expectations. Do your best. That’s where I’m at right now.”