At the fall edition of the Designers & Agents show, collections were either mostly all black and basic or bursting with color. 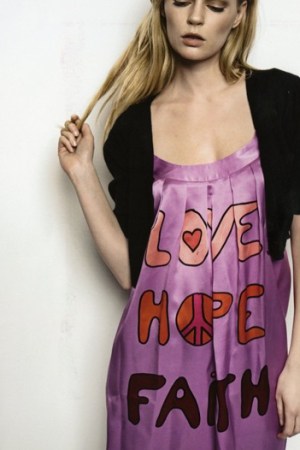 NEW YORK — Fashion seems to be a tale of two cities for fall: all black and basic or bursting with color.

The two approaches marked many collections on the New York and Milan runways, and the story extended to the fall edition of the Designers & Agents show, where collections that were mostly gray or black stood side by side with booths bursting with brights and textures.

Many agreed that despite the constant barrage of doom-and-gloom news, an unexpected sense of optimism permeated the air at D&A, which ended its three-day run at the Starrett-Lehigh Building and the Chelsea Arts Museum on Feb. 23. Retailers and vendors noted that business may be tough, but there is still business to be had, particularly for collections that offer special pieces at a good price.

“The price-value relationship is more important than ever,” said Mikki Thomas Brown, owner of The Browns, a specialty store in Williamstown, Mass. “I am looking for things that look like they warrant the price.”

Brown conceded her open-to-buy was slightly lower than in previous seasons, but added, “That’s why you have to be more focused and take educated risks.”

Ruth Bridgeman, owner of the Ruth Cross label and the L’Usine boutique in Salisbury, England, said, “Color is very important. I have seen a lot of neutral tones and a lot of grays, but with little flashes of color.”

“I am looking for eclectic items that are well priced,” she said. “People are being conservative with their money. Whether it’s $50 or $500, it should look like so much more, so that they feel they are getting a lot for their money.

“Nobody wants to buy black in times like this,” she added. “They need to feel good about themselves, and color can brighten them up.”

D&A also featured booths for Trovata and Tenthousandthings as part of the show’s collaboration with the Council of Fashion Designers of America. Elsewhere, the show offered a crop of noteworthy new talent. Harvey Faircloth, for instance, was started by Mara Papa, Katie Hatch and Abby Clawson Low. The label sets out to offer “functional clothes for women, clothes that will fit women, with a unique detail on each piece,” Papa said. Best-selling looks include a wool and cashmere wrap coat made of one piece of fabric for $126 wholesale and a Serapé hand-wrapped dress for $148 wholesale. Overall, the 25-piece line wholesales from $50 to $250.

Tanya Sarne, who started the Ghost label in 1984 and sold it in 2006, is behind the one-year-old line Handwritten. Sarne took a collective approach for her new venture, collaborating with designers like Gary Graham and Robert Cary Williams for romantic pieces with a Victorian, bohemian flavor at wholesale price points from $66 to $550. “The show was fantastic,” Sarne said. “It’s obviously a tough time, but there’s also a certain optimism.”

Dina Gardner, owner of the Height showroom, which showcased the Charlotte Sparre and Irwin & Jordan lines, concurred. “I think there is an optimism and a new confidence that I didn’t feel at the last show, especially from American buyers,” she said. “Business still needs to be conducted. Price points are important.”

Bestsellers at Irwin & Jordan included a Jermyn jersey satin dress for $155 wholesale, a jersey silk Carnaby dress for $115 and a herringbone wool Oxford jacket for $185. Charlotte Sparre’s top-selling items were a dress made of four silk scarves for $182 wholesale, a peace scarf for $53 and a silk dress emblazoned with the words “Love Hope Faith,” for $118.

Jenny Ha, owner and designer of the Loyale line, said, “I came to the show expecting immediate orders, but people are actually buying for fall. It would appear they are looking to be ready for a fall comeback.”

Hanno Wessel, designer of the Hannoh line, added that many stores were looking for pieces that customers can easily build into their existing wardrobes. Bestsellers included a Harris Tweed coat for $315 wholesale, a plaid cotton and wool coat for $135 and a merino cardigan for $160 wholesale.

According to organizers, the show’s attendance was on par with the last February edition, which brought in some 2,077 retailers. This show had 202 exhibitor booths and 300 companies. Ed Mandelbaum, who produces the show with Barbara Kramer, said that while expectations were lower due to the global economy, he was surprised by the traffic and overall sense of optimism. “There are a lot more international buyers, leading with Japan,” he said.