Bringing the Edge Back to Hugo

Hugo, the most cutting-edge brand in the Hugo Boss Group, has just gotten a cut edgier. 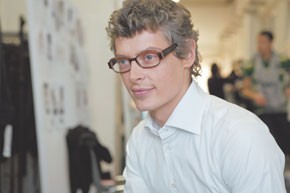 BERLIN — Hugo, the most cutting-edge brand in the Hugo Boss Group, has just gotten a cut edgier.

Established in 1993 for men, with women’s following in 1998, “Hugo was always at the top of the pyramid at Hugo Boss in terms of sharpness, fashion and style. Not in price,” Maeder pointed out, noting that all three Hugo Boss brands (Boss Black and Boss Orange) are at similar price levels. “But over the past, some of [Hugo’s] sharpness went away.”

It was time to refocus, he said, “on why Hugo Boss needs Hugo and why the brand has a right to exist. We have two excellent brands with Boss Black and Orange, but Hugo is exactly in that niche where we’re in competition with top designer brands. As a very trendy, modern, urban collection, lots of creative people working in the arts and media, doctors, architects, etc., wear Hugo — special people who wouldn’t necessarily wear Boss. And that’s an important aspect.”

In 2006, Hugo generated sales of 136.2 million euros, or $197.2 million at current exchange rates, selling to 1,100 men’s and 370 women’s points of sale in 48 countries. Hugo contributes about 10 percent of Hugo Boss group sales, a percentage Maeder sees no need to increase.

“Hugo has a decent size, and as a niche brand it’s bigger than Strenesse, Jil Sander or Costume National, where we clearly see Hugo playing in the same field. I don’t think Hugo will ever do more than about 10 percent of group turnover,” he went on, “but as we’re always growing [as a group], of course Hugo will grow, too. But if the brand did 30 percent of group sales, it’s wouldn’t be a niche brand anymore.”

When it debuted 15 years ago, Hugo helped define a new genre of men’s wear. Young, independent and sexy, it was the James Dean of the German men’s wear market, and spawned a slate of like-minded collections. Hugo women’s wear was also cheeky and irreverent, but lacked the clarity and focus of the men’s line.

That’s due to change under new art director Bruno Pieters. “I think we can be exactly as clear in women’s as in men’s,” Maeder stated. “Perhaps in the past, we changed direction too quickly all the time, with big prints one season, the next puristic, then flowers again. We will continue to have seasonal themes even with the new sharpness,” he said. “But Bruno’s handwriting will come through much more in the next few collections.”

The 30-year-old Belgian designer, who travels to Boss headquarters in Metzingen, Germany, once or twice a week from his Antwerp base, wants to bring Hugo back to its roots. “When Hugo started, the idea was to make it the most fashion-forward label in the company, but somehow that got lost. My ambition is to make Hugo a designer brand with its own identity and fashion credibility. It’s more graphic and pure than my own collection, which is a bit more couture and romantic. I like to use references from fashion history. But not in Hugo. It’s strictly contemporary,” Pieters said.

Not particularly keen on trends, he wants Hugo to have “a timeless look, with clothes to buy and keep and love,” he said. And he’s brought the Hugo man and woman into closer contact. “Before it was two worlds. I want to bring them together.”

Indeed, there were many shared looks on the runway at Mercedes-Benz Fashion Week Berlin late last month: narrow white shirts with small collars and skinny black ties, worn with wide-legged, low slung black wool pants or a softly rounded slim skirt in a second female variation: knife sharp peacoats for him and her, as well as the big, big knits, with long pullovers worn under longer, cabled cardigans plus oversize mufflers. The palette was purely neutral, revolving around black, blue, white, gray and raisin, the main fabrics either lush and soft-handled in cashmere or dry and crisp in treated wool.

The women’s selections were graphically understated — with graphic details subtly built into the silhouette via seam placement, details and cut.

A new eyewear collection with Safilo was launched last summer, jewelry is slated to debut in a year’s time, and if any [Boss] brand could test the home market in a cool way, “it would be Hugo. All these little things are very important to create a picture of a trendy fashion brand,” he said.

Hugo’s biggest market remains Germany, followed by the U.S., Holland and Japan. He sees big potential for Hugo Stateside, “because Hugo is New York. Miami. L.A. — these big urban cities filled with creative people,” he stressed. “And we can build a much bigger business — not only with men’s, but women’s and accessories, too.”

There are currently 12 Hugo company-owned stores globally, including doors in N.Y., Miami and L.A. There are an additional six franchise stores and around 100 shop-in-shops. “We want to grow in all fields. I see a strategy where we can go to big department stores like Saks, Bloomingdale’s and Nordstrom, as well as independent multilabel stores. Plus more freestanding stores in places like San Francisco, South Beach [Fla.], New York, Chicago, Boston. These are all very interesting places for Hugo, especially now.” The collection also will be present in the new Hugo Boss store opening in New York City’s Meatpacking District in April.