Under the new ownership of PPR, the Italian label takes a multipronged approach. 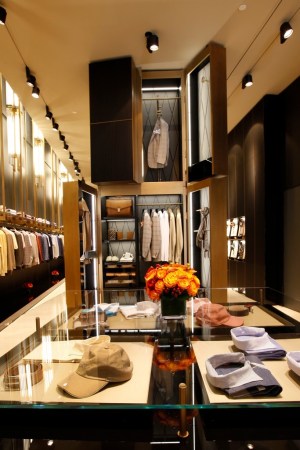 LOS ANGELES — Brioni is embarking on its next chapter.

The Italian suit maker, which was acquired by the French luxury conglomerate PPR in January, has embarked on a bold plan to bolster its business in areas it has been lacking: company-owned retail, accessories and nontailored men’s wear.

“Brioni has always historically been a company excellent at producing things,” said chief executive officer Francesco Pesci. “When you are so focused on manufacturing, sometimes when you are a small company, you neither have the capability nor the time to appreciate the importance of being excellent at 360 degrees. This will happen thanks to PPR, because PPR will expect us to become an excellent company in every respect.”

Pesci was in Los Angeles last week to celebrate the reopening of Brioni’s Beverly Hills store, which relocated from its retail home at 337 North Rodeo Drive, where it had been since 2001, to a 3,500-square-foot space at 459 North Rodeo Drive. It was an apt setting to spotlight Brioni’s desire to place owned stores in major cities, mainly in China and the U.S., countries targeted to drive Brioni’s growth. The brand’s current retail network consists of 76 stores, 32 of them corporate owned, but its new retail strategy should swing the franchise-to-owned store ratio more in the “owned” direction.

“You will see a very significant increase in the number of shops we own in the next five years,” said Pesci. Asked what the store count could be in five years, he offered, “Doubling it could be a little too ambitious, given how the economy is performing at the moment.” Pesci did reveal, however, that an even split between wholesale and retail revenue is his goal for Brioni in three to four years. Today, wholesale accounts for 60 percent of Brioni’s sales (Brioni includes revenue from franchise operations in its wholesale tabulations) and retail 40 percent.

In less than five years, Pesci also foresees an even split between Brioni’s sales from tailored and nontailored apparel, a category that spans denim, priced from $475 to $650, to exotic outerwear from $7,000 to $65,000. Nontailored merchandise currently constitutes roughly 40 percent of sales. In the tailored category, basic off-the-rack Brioni suits range from $5,000 to $9,000, while made-to-measure suits are $5,800 to $40,000. “Since 2009 on, there has been a strong casualization of men’s wear….We see a much larger percentage of our consolidated sales coming from nonformal wear,” said Pesci.

Leather goods and shoes will play an important, if smaller, role in Brioni’s consumer proposition as well. They account for about 5 percent of the brand’s sales now, and Pesci predicts that number could rise to 10 percent of sales at most.

“Obviously, Brioni’s DNA and heritage comes from tailored clothing. This is not going to change. Tailored clothing is going to remain the core product of the brand,” he said, “but we want to stand for Italian elegance defined in an international way. We want to apply this concept not only to tailored clothing, something that we have done over the past 67 years, [but] we want to be successful in other classifications, notably luxury outerwear and also accessories.”

During the winter, Pesci suggested his confidence in Brioni’s merchandise extensions was boosted by “a very, very strong surge” in the performance of leather goods and shoes, which he contended show particular promise. “Men fall in love with shoes. When it comes to a briefcase, you buy a briefcase and then you become emotionally attached to it, and you don’t change it for a number of years, especially if you have received it as a gift. So it does not work like bags for women,” he said. “That’s why I believe in shoes more than leather accessories.”

Brioni’s increased assortment should help draw a younger audience to the brand. Its primary customer is 40 to 55 years old, but the company hopes to attract more men ages 35 to 40 by “always striving to have a distinct say in each classification.”

There has been speculation that Brioni will appoint a creative director to guide the future direction of the brand, which was founded in Rome in 1945. Pesci did little to hush that speculation. “Yes, there is a possibility. I’m a very open-minded person. Why should I not consider [a creative director]?” he asked. On the other hand, he hedged, “There are other brands operating, more or less, in the same high-end market [that are] very successful and have never officially appointed a creative director.”

Pesci did not hedge on Brioni’s exit from women’s. Last year, the brand terminated its contract with Alessandro Dell’Acqua, who was brought on board in 2010 to design a women’s line. Pesci said the decision was driven partially by strategic calculations and partially by a gut instinct about where Brioni should concentrate. Strategically, he explained, Brioni should be “defending our position against the other brands that compete with us, and I don’t think that [a women’s line] is realistic with the intention of becoming a very strong player in the men’s wear market.” And, from the gut, he added, “When you think of Brioni, you think of a man. You don’t think of a woman….We need to focus on our core business. That is the men’s wear brand.”

PPR has already experienced results from that focus. In the first quarter of this year, Brioni registered double-digit growth. Upon its sale to PPR, Brioni divulged it posted 2010 sales of 170 million euros, or $225.7 million at average exchange rates, but Pesci declined to update that total, given the recent growth. He did give details about the sources of the growth, though. “Europe is a very challenging market at the moment, with differences between one market and another. Our home market is probably the most challenging,” he said, adding, “I would say most of the growth is clearly coming from the U.S., China and Russia. We hope this will continue.”