Brioni’s Brendan Mullane Looked to Past for Future Direction 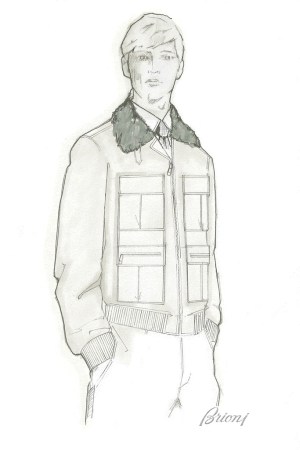 ROME — Think of Brioni and the words “daring and innovative” may not be the first ones that spring to mind.

But Brendan Mullane, the company’s first creative director, believes the brand has the potential to shake off its sedate image. To do so, Mullane is actually looking back to Brioni’s early days, to the Fifties and Sixties, when the label was considered a trendsetter.

“Brioni stands for the ultimate level of perfect harmony of craftsmanship and quality,” said Mullane in an interview at the company’s offices in central Rome opposite its luxurious and historic boutique. “What you don’t immediately see, the level of that quality, is even more. Brioni pushed boundaries in the Fifties, it was driven and innovative and it’s wrong for the brand to be perceived as anything else,” said the British designer, who joined the company in July.

Brioni is forging its future under the ownership of PPR, which took control of the men’s wear firm in 2011, and will unveil the first collection designed by Mullane on Monday in Milan with a presentation at the neoclassic Palazzo Serbelloni.

“It’s been a good year, it started with the decision to interrupt the women’s line, but we’ve recovered with the men’s division and the most significant step was the arrival of Brendan,” said Francesco Pesci, chief executive officer of Brioni. In August 2011, the company said it planned to close its women’s business, severing ties with that line’s creative director, Alessandro Dell’Acqua. “Historically, there’s never been a creative director for men’s, and this change has been very well received. It’s a signal that communicates the intention of Brioni to move in a different way,” said Pesci. “Brendan is not reinventing the brand, but he is putting it in contact again with its original spirit.”

He said that in the 1945 to 1960 period — at a time when the market was dominated by Savile Row and British style — Brioni was known not only for its artisanal quality, but also for its “provocative” streak. “Brioni was almost blasphemous; it was the Christian Dior of men,” he said. Brioni was founded in 1945 by Nazareno Fonticoli, the master tailor, and Gaetano Savini, the original fashion coordinator.

Mullane’s fall collection will be “graphic, sartorial, with high-end fabrics, and more contemporary, architectural shapes,” he said, noting that he wants the brand to be “recognizable with a twist,” with a “sartorial palette,” to which he “injected color — fearlessly.”

The story behind the collection is based “on the idea of a journey an Italian man has taken, noting in his diary what’s happened on the trip, what he did at different stages.” He views Brioni more as a lifestyle brand than a fashion one, repositioned “in the super-high, luxury category.” He underscored that he is “not anticatwalk,” but that a presentation would be an appropriate first step for the brand, in order to show how “diverse and multifaceted” Brioni is.

Mullane was previously senior head men’s wear designer at Givenchy, working with artistic director Riccardo Tisci on the runway collections, and he was also responsible for pre-collections and lines specifically for the Asian market. Prior to Givenchy, he held various positions in men’s wear design at Hermès, Louis Vuitton, Burberry and Alexander McQueen. Mullane studied at Kingston University, where he obtained a B.A. in fashion, and at the Kingsway College of London, where he gained a BTEC Diploma in art and design.

“I was happy with my life in Paris. I was going to move only if it felt right. I knew Brioni as the ultimate sartorial brand, but I was not prepared to see craftsmanship in such a powerful form — it was a pleasant surprise,” said Mullane. “It’s the nearest thing to doing a male version of couture.”

The company’s manufacturing facilities are in Italy’s Penne, a two-and-a-half-hour drive from Rome, and the designer praised the artisans there for their passion and skills. “They never say no to a request, their first answer is always: ‘OK, let’s try,’” he said. Mullane said it was “important” to spend time in Rome and Penne, where Brioni also has a tailoring school, to be close to “the heart” of the company. “I am in constant communication with the artisans, we cut every canvas for each fabric, it’s a lengthy working process,” he explained. Mullane, who is creating his own design studio, said Rome also helps his creativity. “It’s very cultural, and everyone here is so nonchalant about how beautiful the city is,” he marveled.

Pesci said the Italian men’s wear brand, known for its high-end tailored suits, is increasingly developing categories such as outerwear and sportswear, footwear and accessories, and is also targeting a younger customer.

“Brioni has the know-how and expertise to cater to different kinds of men, who can be 60 or 35, who think differently about themselves and see themselves in a different light,” said Mullane. “There’s nothing wrong with feeling sexy or desirable, men are opening up to this idea and Brioni can give them this desire factor.”

Pesci concurred, saying that the market has changed significantly, and that men are evolving in a much more competitive arena, underscoring how PPR, which controls labels including Gucci, Bottega Veneta, Stella McCartney and Puma, is willing to grow and reposition Brioni. He noted that the French group’s support is not only financial, but much more comprehensive, in the negotiation of media costs, indirect services, real estate and supplies. Although each brand is “autonomous within a well-defined frame,” Pesci pointed to the “exchange of information,” which he felt was “very important” to Brioni’s future.

“The definition of a brand’s platform, the binding mission, and ours is the aspiration to be unquestionably the reference point for men’s elegance. This is our mission and our claim is to be one of a kind,” said Pesci.

The market is becoming increasingly more global and Pesci said the company has responded efficiently to the significant “growth in casualization.”

Brioni’s nontailored division now accounts for 45 percent of sales. Pesci identified the U.S., Russia and the former Soviet Union countries, as well as China as Brioni’s main strategic markets. “Europe is very important for its capacity to attract customers from outside the continent that have a high spending power. On the other hand, I won’t conceal my worries for the constant weakening of local spending power,” said Pesci.

Brioni has “expansion plans” for the U.S. as well in 2013, with the opening of stores, but Pesci declined to provide further details. The company is also taking direct control of retailing in China, where it already counts 16 franchised stores, including Macau and Hong Kong. Globally, there are 36 directly operated stores and 47 franchised units.

In terms of categories, in addition to strengthening its eyewear, footwear and leather goods, Brioni is expanding its knitwear. Toward this end, he noted that the company, which also works with specialized, outside laboratories in Italy, is optimizing efficiency and its industrial structure in Penne.