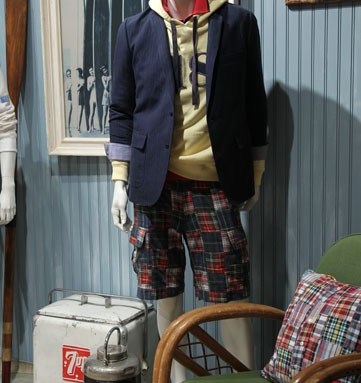 Brooks Brothers is extending the reach of its brand through a series of new products and launches.

At its spring presentation on Monday, the retailer revealed that it will launch a separate Web site for the Black Fleece collection designed by Thom Browne. The site, blackfleece.com, will go live at the beginning of next month and will feature an online look book and some original content designed to appeal to the collection’s customers.

In addition, the company will add body splashes for men and women to the Black Fleece offering in November. Produced by Inter Parfums, the company’s licensee for its Black Fleece fragrance, there will be three separate bottles, called Red, White and Blue, which are signature colors of the collection.

For this season, the line offers a lot of military influences for men and women, including cadet jackets with piping or belted coats in navy, along with a desert grouping. The women’s collection, which has been moving toward a feminine sensibility, includes ruffles, ruching or embroidered patterned pieces.

In addition, Brooks Bros. unveiled a line of men’s and women’s golfwear under the St. Andrews Links Exclusively by Brooks Bros. label. It features authentic golf products such as technical golf pants, polo shirts and jackets, but includes argyle sweaters and navy blazers, as well. A catalogue will be offered in April, which is being shot at the iconic Old Course in Scotland, and the line will be carried in Brooks Bros. stores and the St. Andrews pro shop. “And we feel there is an opportunity for wholesaling the line outside Brooks Bros. stores as well,” said Lou Amendola, chief merchandising officer.

The presentation also showed the company’s new collection of home merchandise, which will be sold exclusively online. Bedding will be available in three color combinations: blue and white, solid white and herringbone white with navy and burgundy trim. Towels are being offered in eight colors. The home line, which includes pillows and lamp shades in rep tie fabric, will launch next month. “We want to be a global lifestyle brand,” said Amendola.

For the spring collection, Brooks Bros. offered a line of relaxed, garment-washed pieces such as patchwork madras shorts, sweatshirts, jersey knit polos and baseball jackets designed to appeal to a younger customer. Cuts were slimmer and more youthful. The traditional Brooks Bros. line, which also features slimmer silhouettes and unlined, deconstructed jackets, centered on the use of strong, rich, deep colors. For women, it was “all about prints,” Amendola said. Accessories, such as perforated leather bags and shoes, were also a highlight.