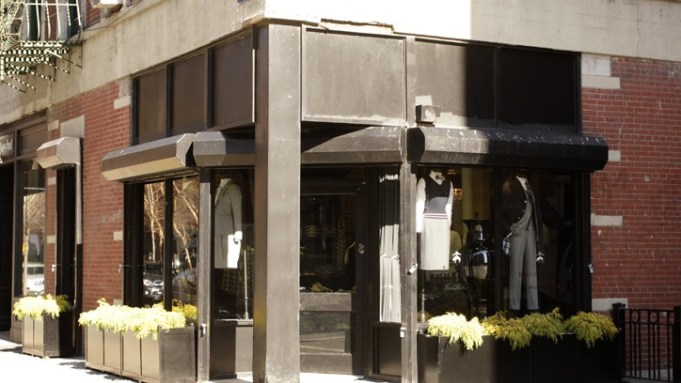 Brooks Brothers has a little uptown-downtown mojo going on.

The specialty store chain will unveil its long-awaited Black Fleece stand-alone store today on Bleecker Street at the same time it invites customers back to the fifth floor of the Madison Avenue flagship to see the newly renovated men’s suit area.

Customers who stop by the new Black Fleece store will also find friendlier price points on the men’s tailored clothing and women’s wear collection. Prices for the Thom Browne-designed line have been dropped significantly — a men’s suit that formerly retailed for $2,700 can now be had for $1,900 and women’s prices have dropped in tandem — reflecting the “friendlier” exchange rate of the euro for the Italy-produced collection.

The women’s line, which has been a tougher sell since its introduction, has been made “softer and more feminine,” Del Vecchio said. “We listened to the customer. [When we first introduced it], it had very traditional construction, but it wasn’t comfortable. Now it’s easier to wear.”

The men’s shirts and ties, two of the most popular items within the collection, remain at the same price, $150 and up, he noted.

Although Brooks Bros. has not been immune from the retail downturn, Del Vecchio said the company is weathering the recession “better than most people. There are still many challenges and fears of the unknown, but we’re very comfortable because we know we’re in the sweet spot more than ever before. We’re not a designer brand like Armani or Prada, we’re more of a family brand” with lower-than-luxury prices. “We feel we’re in the right place for when this is over. It’s a good time to be Brooks Bros.”

As a result, he’s hopeful the label’s first freestanding store will find a profitable niche in Greenwich Village. The store was originally expected to open last fall, but “permit delays” pushed back its debut.

He declined to project a volume figure for the unit. “Volume is not important. We look at this as a laboratory. We want to learn about the customer and how people will respond to having Black Fleece outside a Brooks Bros. store.”

The 800-square-foot Black Fleece store on the corner of 10th and Bleecker is a carefully conceived jewel box that is home to the entire men’s and women’s line.

“It’s so nice to have a home for it now,” said the CFDA award-winning Browne, looking around at the exposed brick walls, black wood floors and the large black laquered urn on top of an ebonized display table. He also pointed to the archival art on the walls, which tout the historical significance of Brooks Bros., as important to creating a backdrop for the line.

“A lot of people down here don’t know Brooks Bros.,” he said. “This store is a perfect introduction not only for Black Fleece but Brooks Bros. as well. They don’t realize how old it is and how important it is in American history. Black Fleece draws upon that heritage.”

In order to give the collection as much selling space as possible in the small space, Brooks converted the lower level, which had formerly had a dirt floor, into fitting rooms.

Lou Amendola, chief merchandising officer for Brooks Bros., said the store was designed by Del Vecchio and the merchandise will rotate depending upon season and popularity. “Claudio wants us to have fun and keep working on it,” he said.

Amendola said the flexibility of the store is similar to the way the collection has evolved since its fall 2007 introduction. “Thom has been very willing to listen and learn,” he said.

Amendola expects the women’s wear and sportswear to perform best at the new store. “We feel this environment, with its quaintness and coziness, will help the women’s collection,” he said.

Last June, Brooks and Browne extended his “guest designer” agreement through spring 2011. Browne was bathed in attention in Europe this month, when he was the featured guest designer at Pitti Uomo and then days later his collaboration with Moncler, called Gamme Bleu, was shown at Milan men’s fashion week. Next Browne flew to Paris, where the boutique Colette dedicated an area to his tennis-themed spring collection.

Del Vecchio said he was pleased with Browne’s increasing prominence. “Every time they mention Thom Browne, they mention Brooks Bros. So the more visibility he gets, the better.”

His Black Fleece collection is also featured prominently at the Brooks flagship on Madison Avenue, which is undergoing a massive interior and exterior renovation. The updates were prompted by the closure last week of the company’s Fifth Avenue store on 53rd Street. The first phase involved bringing all the men’s suits together onto the fifth floor, which formerly housed women’s wear. The company opened a temporary women’s store next door on 44th Street, which will remain for the next couple of years until the collection is brought back onto the second floor of the main store.

Upon exiting the elevator on five, customers will see an enhanced Black Fleece department on the right and a made-to-measure area on the left. The company’s digital tailoring equipment has also been moved here. For the first time, made-to-measure suits, shirts and ties are combined; there’s a department for Golden Fleece, Brooks’ upper-end line, as well as its bread-and-butter 1818 collection. There’s also a formalwear area.

In the back of the 10,000-square-foot floor, there’s a newly installed pool table and a cappuccino/water bar with banquettes and tables.

About one-third of the floor is devoted to made-to-measure. “This has been a growing business for us,” Amendola said. “Given the economy, we think it can be even more important. People who need tailored clothing can come in and customize their wardrobe at an affordable price.” He said suits start as low as $600.

The next floor to be renovated will be four, which, when completed, will house men’s sportswear.