The blogger has struck a long-term deal with the company to launch a line of fur accessories —?his first designer collaboration. 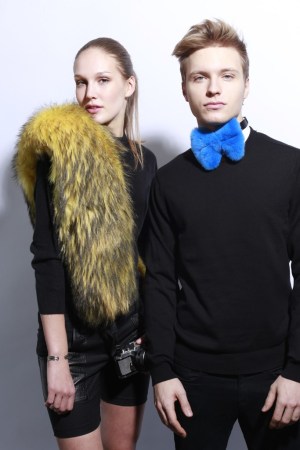 Fur-sporting BryanBoy is following his passion. He has struck a long-term deal with Adrienne Landau to launch an exclusive collaboration of fur accessories for fall. The label, Bryan Boy for Adrienne Landau, is the blogger’s first designer collaboration.

The accessories, which are unisex, are in rich, vibrant colors and feature camera straps, bow ties, hats, scarves and cowls in furs ranging from rabbit and mink to raccoon and fox.

“I use fur as a personal punctuation mark,” said BryanBoy in an interview at Landau’s showroom at 519 Eighth Avenue in New York. “It’s fun, easy and anybody can wear it.”

BryanBoy explained that the idea of collaborating with Landau had been percolating for awhile. He said he would frequently go to Landau’s showroom for his blog, and would ask her to design things in other colors. The two then decided, “Why don’t we work together?” he said.

The collection’s color palette ranges from deep shades of dewberry purple and shamrock green to sapphire blue, soft lilac, China rose, poppy yellow and vibrant red. The line, manufactured in China, will be available for fall at retailers worldwide as well as on adriennelandau.com and bryanboy.com.

Bryan Boy for Adrienne Landau wholesales from $38 for a rex rabbit bow tie to $118 for knit rex rabbit cowl to $598 for a silver fox camera strap. Landau declined to give a first-year projection.

“After blogging for eight years, people are aware of my aesthetic and what I love. It was time for me to do something really creative. Now is the time to explore my creativity and challenge myself to do something more. I don’t want to be 50 years old and still be taking pictures with my cell phone on the street,” said the 30-year-old blogger.

Landau said that BryanBoy was 100 percent involved in designing the merchandise and knew exactly what he wanted.