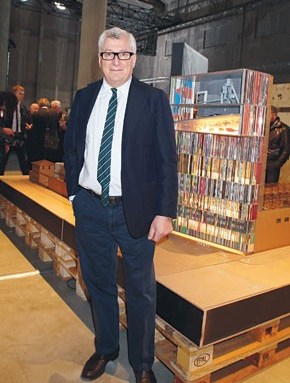 Bertelli and Prada, who created the nonprofit organization in 1993 and have collected more than 500 works by contemporary artists such as Anish Kapoor, Tom Sachs and Sam Taylor-Wood, will invest 25 million euros, or $36.5 million at current exchange, in the project.

“I’ve rooted for this for so long, and it’s finally happening,” said a beaming Prada after the presentation. Asked about leaving this legacy to Milan, the designer said: “I love Milan, I know I could go anywhere I want, but my roots are here.”

A relaxed and upbeat Bertelli fielded questions from a stage with Koolhaas and Germano Celant, the Fondazione’s artistic director, while the designer sat discreetly in the audience. On the sidelines of the presentation, Bertelli addressed the initial public offering issue and said Prada “will definitely go ahead with the listing,” but stopped short of setting a date.

“We are watching the markets and the currency variations, but we are in no hurry,” he said. “We need to choose the most opportune moment.”

Business in the U.S. is “very good” and European tourism in that market is a boost to the company, said Bertelli, who has 50 store openings scheduled by next year in locations such as Warsaw, Athens, Istanbul and Barcelona, in addition to cities in the Far East.

But Bertelli’s focus was on the foundation project, which is expected to be completed in three years. It will be located in Milan’s Largo Isarco 2, in a late 1800s complex that once lodged a distillery and that has most recently been headquarters for the offices of Luna Rossa, Bertelli’s international sailboat racing venture, which he said has come to an end.

“It’s over. Everything has an end,” said the entrepreneur, who invested more than $80 million in three editions of the America’s Cup over the last decade. “Let’s leave it to someone else.”

Koolhaas’ plans for the existing 81,000-square-foot complex, which comprises seven buildings and surrounds a large central court, will incorporate another 108,000 square feet. A striking new tower will display the permanent exhibitions and will be added to the existing structure. A new auditorium also will emerge in the courtyard.

Koolhaas said he had “great affinity” with Bertelli and Prada. “They are demanding yet cultured and refined clients who love to experiment,” said the architect, whose think tank, Office of Metropolitan Architecture (OMA), has collaborated with the couple for years. “I’ve never been told that any of my designs was ever too ambitious,” he said, noting their “search for quality and experimentation.”

As for how much of the Prada spirit seeps into his projects, Koolhaas said: “We are sophisticated enough that our work is not a simple reflection of the personality or mentality of [Bertelli and Prada].”

Celant said the project is not solely a museum, emphasizing that the foundation is about being active in finding new artists as well as preservation. In addition to the permanent exhibitions, there also will be temporary shows and the foundation will approach “new media and languages, from cinema to philosophy, from fashion to performances,” said Celant.

The foundation’s works had been shown in Prada’s headquarters in Via Fogazzaro, and the exhibits were limited to a maximum of about 40 days, given the fashion-related events held there. Because of the large scale of many of the artworks and expansion into other media, Celant said the design team was obliged to think of “big spaces.”

Two buildings will house the Prada and Luna Rossa archives. Celant said the new gallery will allow the foundation to plan collaborations with international museums and support smaller museums. “This will be a technologically avant-garde exhibition machine dedicated to contemporary culture but also suited for historical pieces,” said Celant.

Bertelli, who hopes to find sponsors to partly finance future exhibitions, said, “We want to enjoy collecting art works [and] cultivate the relationships with artists in our search for original, free and fresh ideas.”