Burberry to Get Channel on Apple Music

The channel will debut Tuesday with exclusive videos from emerging artists and will have a tie-in to Burberry's show next week. 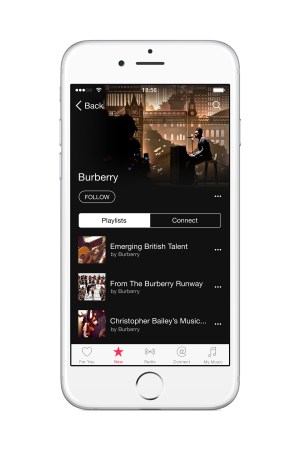 Yet another fashion brand is linking with Apple — but this one is hardly a surprise.

Apple’s latest fashion partner is Burberry — whose former chief executive officer Angela Ahrendts is now the tech company’s senior vice president for retail and online. The twist is that Burberry isn’t linking with Apple in fashion. Instead, the British company will be the first fashion brand to have an official presence on Apple Music.

The brand will debut its channel Tuesday with slew of exclusive videos from emerging artists and a tie-in with Burberry’s runway show in London next week.

The Burberry channel will live in the “Curators” section of Apple’s music service, with never-before-seen videos from artists such as Lilla Vargen, Georgie and Rhodes and Alison Moyet. British singer-songwriter Moyet will also perform at the brand’s women’s show on Sept. 21 in London, with the performance hitting the channel after the show.

Burberry chief creative and executive officer Christopher Bailey, who has made music part of the brand’s core messaging as it seeks to appeal to a younger audience, will oversee the Apple initiative, which he called an extension of Burberry Acoustic, a music platform established by the brand five years ago. Since 2010, Burberry Acoustic has delivered almost 100 performances on both burberry.com and youtube.com. Each has been entirely commissioned, chosen and filmed by the brand, and views on YouTube have surpassed 19 million to date. Artists from Keane to Tom Odell to James Bay have all worked with Burberry.

But Burberry isn’t earning any revenue from the channel, indicating it is primarily a marketing tool.

“This partnership with Apple Music is an exciting next step in a long-standing relationship with Apple and in our support of emerging British talent.  The platform is a perfect fit for us because it allows us to take our unique collaborations with British musicians both new and established to as many music fans as possible and in a deeper and more connected way than ever before,” a spokesman from the company said.

The Apple Music channel follows a handful of digital firsts for the brand, from its launch on Twitter’s live-streaming application Periscope in April to being the first luxury label to sell through a tweet.

While the fashion world has speculated for some time about a potential linkup between Burberry and Apple following Ahrendts’ departure, this isn’t the first time the British company has teamed with the tech firm. In September 2013, just a month before Ahrendts’ departure became public, Burberry teamed up with Apple to use its iPhone 5S to capture and share the entirety of its digital imagery,videos and live-stream content before, during and after its spring 2014 runway show.

Burberry’s launch of an Apple Music channel is the second major announcement about Apple partnering with a mega-fashion house in a week’s time. On Sept. 9, during its press event in Cupertino, Calif., Apple unveiled the Apple Watch Hermès, which comes in three styles and has an opening retail price point of $1,100. The timepieces will hit Apple retail stores and Hermès stores on Oct. 5. It’s clear that Apple wants its smartwatch to be viewed and treated as a luxury accessory.

Burberry’s channel on Apple’s live-streaming music service comes as there are growing questions about the success of Beats in the face of intense competition from the likes of Spotify and Pandora. Many people using Apple’s service are still in the three-month free-trial phase, and the real success of the service won’t become apparent until users have to start paying for the service, which will cost $9.99 a month or $14.99 for a family subscription.

The questions about Apple Music’s success were magnified last month when Ian Rogers, the Apple executive who headed Beats, left the company. A week later, it was revealed that Rogers would join LVMH Moët Hennessy Louis Vuitton in the newly formed role of chief digital officer. LVMH chairman and chief executive officer Bernard Arnault said Rogers would help strengthen the company’s “digital ecosystem,” adding that he would “build on the foundations laid by Thomas Romieu” (an LVMH executive who specialized in digital) and “take the houses to the next level and explore new opportunities for the group in the digital sphere.”