Burberry to Unveil Festive Campaign With a ‘Billy Elliot’ Theme

The campaign marks the 15th anniversary of “Billy Elliot," with celebrities such as Sir Elton John, Romeo Beckham and Naomi Campbell. 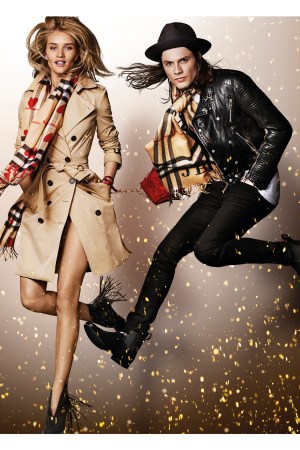 An all-British cast is featured in Burberry’s festive campaign, which is a tribute to the hit film and musical “Billy Elliot.”

Several people in the ads are newcomers to the Burberry family, but others are repeat performers. Beckham, for example, features in his second Burberry Festive campaign, while this marks Campbell’s third campaign for the house and Rosie Huntington-Whiteley’s fourth. Bay performed live at the Burberry spring 2015 fashion show, while Ezra, a British musician, performed at the Burberry “London in Los Angeles” show earlier this year, after the Burberry men’s wear fall 2015 show, and at the Burberry event in Shanghai in April 2014.

The three-minute film was created by Christopher Bailey, chief creative and chief executive officer of Burberry. Bailey praised “Billy Elliot” as “an incredible film full of so much joy and energy,” and also said the celebrities who appear in the Festive campaign “are quite simply some of the biggest names in film, music and fashion.”

The film begins with original footage from the 2000 movie by permission of Working Title. Burberry cast members re-create the opening jumping sequence. The movie will go live across Burberry’s platforms at 7 p.m. Tuesday in the United Kingdom.

A set of accompanying still images, shot by Mario Testino, will support the film. The print images feature Rosie Huntington-Whiteley, Bay, Beckham and Campbell alongside Guards in traditional uniform. The print campaign will run from today through the end of December. Ads will appear in the December and January issues of various national and international editions of Vogue, Vanity Fair, Elle, Wired, Harper’s Bazaar and GQ, as well as digital sites The Daily Beast and The New Yorker.

The film will be premiered at the brand’s Regent Street flagship in London during an event hosted by Bailey and Sir Elton John on Tuesday, to be attended by the rest of the cast and Burberry crew. The film’s soundtrack is “Cosmic Dancer,” by T-Rex, which accompanies the opening credits of “Billy Elliot.”

The campaign coincides with the full range of Burberry festive gifts that will be available in store and on burberry.com. The holiday looks that are featured in the campaign include the heritage trenchcoat, the made in Scotland cashmere scarf, Burberry tailoring, limited-edition embellished gowns and The Baby Bucket Bag, as well as the new Burberry Beauty makeup look created by Burberry makeup consultant Wendy Rowe.

This year, Burberry will introduce The Burberry Scarf Bar, which offers Scottish scarves that can be monogrammed.

“Billy Elliot” has raised significant funds for charities that support the Easington community ever since it was filmed in the English town. To continue the support, Burberry will donate 500,000 pounds, or $771,805 at current exchange, to be split between the charities Place2Be and the County Durham Community Foundation, with the purpose of reducing barriers to education, training and employment. The donation is being made in recognition of each artist’s participation in Burberry’s campaign.