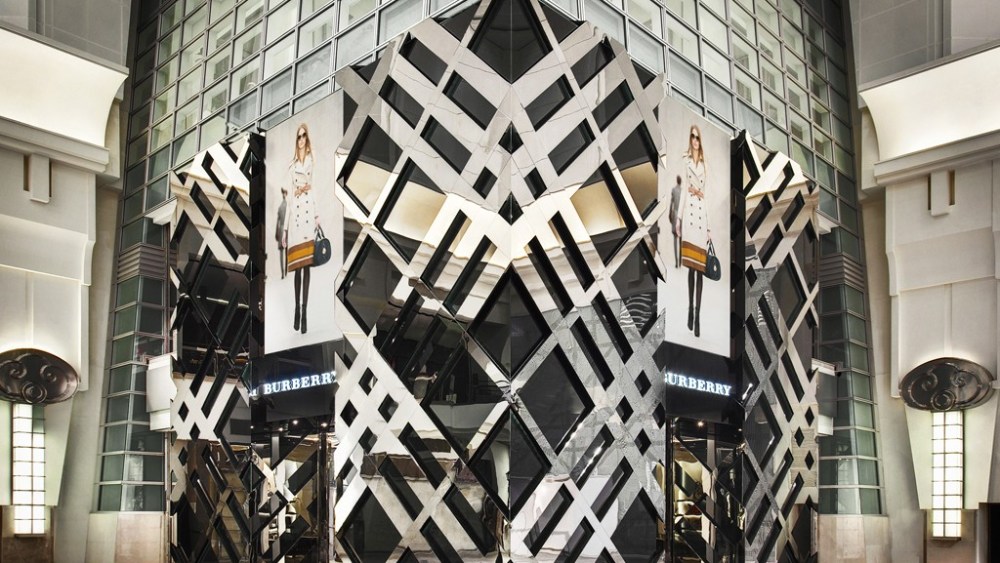 TAIPEI — Burberry on Thursday marked the official opening of its newest store here with the launch of Burberry World Live, a multimedia extravaganza inspired by London’s unpredictable weather.

Covered in the company’s signature checks, the 14,800-square-foot flagship located at the base of the iconic Taipei 101 tower is the brand’s largest in the region. While Burberry is already sold in 20 locations in Taiwan, this is the country’s first flagship. In addition to carrying accessories and the Burberry Prorsum, Burberry London, Burberry Brit and Burberry Sport collections, it is also the first to offer Burberry Beauty’s range of shadows, powders, lipsticks and fragrances.

“Taiwan is an ever-expanding country and we just felt that we needed a strong presence,” Bailey said. “It was very organic based on our global strategy and the focus that we’re putting on Asia as a whole.”

Burberry installed large LED flat screens throughout the store as part of its Retail Theatre concept. The installation includes a swipe-able look book of the upcoming fall season as well as two custom-built 27-by-15-foot screens located above the store’s two front entrances, which offer shoppers a look into the Burberry universe with content streamed from its London headquarters. VIC, or Very Important Customer, rooms provide shoppers intimate spaces to explore burberry.com and shop straight from the runway. The interactive touch screen can be controlled from any iPhone or iPod Touch via an app that can be downloaded at the store.

The company created 101 alligator leather iPhone slip cases, available in six colors, that will be sold exclusively at the store.

Bailey, who developed the store’s design, has been credited with helping bring the 156-year-old heritage brand into the digital age, allowing fans to connect and communicate with the company through various social platforms, including Facebook, where they have more than 210,000 Taiwanese followers. The company also opened a local Twitter account last month.

Asia has played a key role in Burberry’s growth in recent years. Burberry’s revenues in Asia rose 37 percent in the second half — the most of any region.

In addition to the local market, luxury brands like Burberry have also benefited from a surge of tourists from Mainland China. Last year, 1.8 million Mainland Chinese arrived in Taiwan, a 9.4 percent increase from the year before, generating about $1.1 trillion new Taiwan dollars, or $38.1 billion, in revenue for the island, according to the Taiwan Tourism Bureau.

In an effort to boost cross-strait tourism, qualified residents from Beijing, Shanghai and Xiamen were allowed individual travel to Taiwan for the first time last June. Beginning April 28, that ability will extend to residents from six more cities on the Mainland, including second-tier cities such as Chongqing and Guangzhou, with four others to be added before the end of the year. With the daily visitor quota from China also doubling from 500 to 1,000, the Taiwan Tourism Bureau estimates about two million Mainland visitors will come to Taiwan this year. Most of them will pass through the fourth floor of Taipei 101, which leads up to the ticket counter for the observatory.

“The fourth floor used to be a restaurant dining section,” said Michael Liu, spokesman for Taipei Financial Center Corp., the owner of Taipei 101. “Now, within a year, you see all these megaflagships. This is what we think will increase revenue from local consumers as well as visitors from other countries.”

Going big seems to be the trend as evidenced by Burberry’s neighbors. Last month, Dior opened its largest flagship in the world next door and Louis Vuitton is expected to do the same next week, with Prada and Miu Miu scheduled to follow in June.

Although it rained all day, the weather seemed to be on Bailey’s side. Guests, including Taiwanese singer and actress Jolin Tsai, who was Bailey’s co-host for the evening, as well as actor Daniel Henney and Jessica Jung of Korean pop group Girls’ Generation, were greeted by checkered umbrellas as they made their way into the specially constructed venue for the evening’s events. Inside, a shower of crystals in the center of the room lifted to reveal British musician Tom Odell seated before a grand piano surrounded by violinists as he performed. An eight-part film, directed by Bailey, followed. The panoramic videos were projected onto the interior screen walls of the space and synced to a soundtrack backed by lights and streams of metallic confetti. When the digital storm subsided, DJ Tom Price kept the party going.

“A brand is so much more than products. A brand needs to resonate,” Bailey said. “Experiences are something that are as relevant to the brand as a shoe or a bag or a coat. People need to feel it and they need to feel a part of it. “

Burberry World Live will go on tour later this year with installments in London, Hong Kong and Chicago.

“[Taipei] feels like a city that is moving,” he said. “You kind of feel like, in this city, someone sprinkled seeds a couple of years ago and all of a sudden they’re starting to flower.”