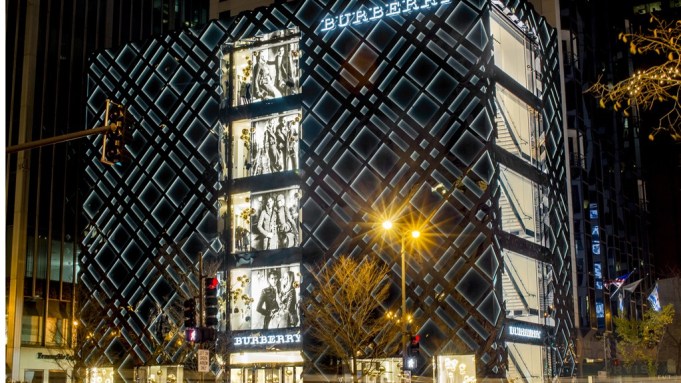 CHICAGO — Burberry more than doubled its presence on Michigan Avenue here this month, opening a five-story flagship that is set to serve as a benchmark for other North American locations.

Despite a soft opening, the 25,000-square-foot store with almost 17,000 square feet of retail space attracted lots of attention, with onlookers snapping photos of its painted glass, black chrome and LED-lit exterior.

The location represents the result of 16 months of construction, with the London-based company building the store from the ground up, going from two floors to five.

“It’s great for the avenue; it’s caused so many other establishments to raise the bar,” said Chikow, noting that nearby Coach recently remodeled its Michigan Avenue store and Salvatore Ferragamo and Ermenegildo Zegna are expanding their locations.

The ground floor of the new Burberry store has a 7-by-9-foot “digital wall” displaying runway shows, ad campaigns and other globally synchronized content. The floor also contains an assortment of accessories, geared for gifting, and is the first North American location to have a Burberry Beauty cosmetic counter.

In addition to the expanded assortment, the new Chicago location, which is the second-largest U.S. store after New York, has private second-floor fitting rooms with suede walls, mood lighting and an iPod dock for customers to choose their own music.

Upper floors feature the men’s Prorsum collection and a women’s shoe salon, as well as the children’s collection on the fourth floor.

Later this month, the location will boast a black-and-white-themed Chicago capsule collection featuring a women’s gabardine trench with ostrich feather bottom, a men’s crocodile trench and women’s handbags in crocodile and alligator.

The brand’s chief creative officer Christopher Bailey and ceo Angela Ahrendts are expected to mark the store’s opening with a private event Nov. 29, when the store will showcase images of Chicagoans wearing the Burberry trench.