To fete the opening of its Rodeo Drive flagship, Burberry brought a massive dose of British flavor to one of Hollywood’s most iconic locations, Griffith Observatory. 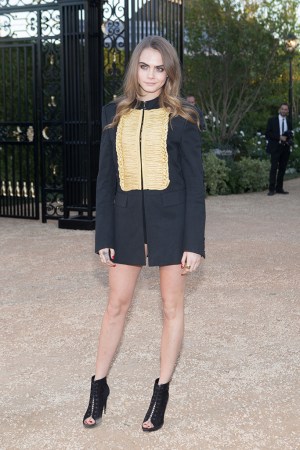 To fete the opening of its Rodeo Drive flagship, Burberry brought a massive dose of British flavor to one of Hollywood’s most iconic locations, Griffith Observatory. “I wanted to be able to celebrate the store in a special way because this is a showman’s city. This is where James Dean shot ‘Rebel Without a Cause.’ That was such a big film moment, and I just thought if we could bring a little of London to that scenic environment, then that would be something extraordinary,” said Christopher Bailey Thursday night.

He brought more than a little: wrought-iron Georgian gates from London gave way to English lavender and rose gardens overlooking the Hollywood sign. Flutes of Champagne and several string quartets kept 600-plus guests — including the Beckham brood, Mila Kunis, Rose Byrne, Jason Statham, Dylan Penn and Kate Beckinsale; a gaggle of models (Cara Delevingne, Rosie Huntington-Whiteley, Suki Waterhouse), and a handful of musicians (Jamie Hince, Ellie Goulding, Matt Bellamy, Alison Mosshart) occupied until sunset. “Now this says, ‘We are a fashion house,’ ” noted Ashley Madekwe approvingly. “This is not some cocktail soiree on a rooftop; this is Griffith Park Observatory. It’s very grand.”

This story first appeared in the April 20, 2015 issue of WWD. Subscribe Today.

At dusk, guests were ushered up a flight of stairs, into a custom-built structure resembling the London runway venue. After a good deal of shuffling and schmoozing — teens Kiernan Shipka and Brooklyn Beckham said their hellos and Anjelica Huston hugged Elton John — the show began with George Ezra, Tom Odell, Clare Maguire and Benjamin Clementine serenading the models, who ended the show wearing a collection of eveningwear exclusive to the Rodeo Drive store. Even show-weary editors took notice as Jourdan Dunn, Charlotte Wiggins, Malaika Firth, Ella Richards and Amber Anderson strutted out in floor-length tulle dresses with silk embroidery and cutout bodices looking like luxe gypsies or canyon-dwelling California bohemians. For the men, there were slim velvet tuxedos trimmed in grosgrain.

Applause broke out when Naomi Campbell closed the show, or so everyone thought, until the First Battalion Grenadier Guards entered playing drums and flutes, then marched on as the far wall opened to reveal the Observatory lit with projections of British and American flags. Surprise guest James Corden, who was filming a bit for “The Late Late Show,” brought up the rear. “That was beautiful,” declared Elton John as the crowd made its way onto the lawn. “It was really mental. Not your average show,” said Byrne. “It made me really homesick,” said Huntington-Whiteley. Had she ever been to the Observatory? “Yes, I hike up here. Usually by the time I get here, I’m sweating, but tonight, not so much.”

By now, the Guards had taken off their black fur hats (or lent them to guests like Campbell, who insisted on wearing one for photos) and were swilling drinks. “This is probably the biggest engagement we’ve ever been invited to, civilian-wise. Obviously, we do a lot of things for the Royal family. But Burberry flew us all this way to the Hollywood sign, which is totally surreal,” said one of the soldiers.

Marveled Cat Deeley, “They’ve got all these medals on, and you turn around and go, ‘Bloody hell, they are really brave.’ ”
Bailey, after the extravaganza, looked pleased.

“I told you we were going to do something fun,” he said.