The 3,400 square-foot space reflects the store design concept developed by Christopher Bailey, with British materials and themes used throughout. 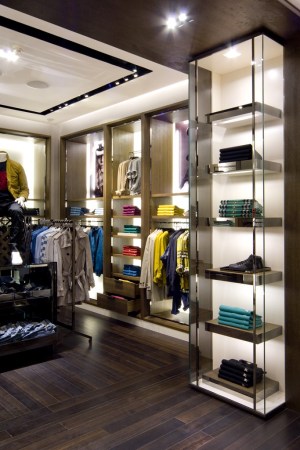 The Johannesburg store cements the relationship between Burberry and its new South African franchise partner, the Surtee Group, whose luxury brand portfolio includes Hugo Boss, Lacoste and Armani Jeans. The Surtee Group recently acquired the franchise previously held by another local fashion group, RetailCorps. Speaking on behalf of the family-owned company, Fazel Surtee said that the decision was based on “looking at Burberry as an incredible global luxury brand in the South African retail environment.”

When the Cape Town store opened, Burberry chief executive officer Angela Ahrendts said, “One of our key company strategies is to accelerate retail-led growth on a global basis. We recognize the potential in the South African market with both local luxury fashion consumers as well as a flourishing tourist market and anticipate further expansion in South Africa.”

Echoing Ahrendts’ statement, Surtee pointed out that “Burberry is a global luxury brand with an incredible heritage since 1856 as an iconic, outerwear brand. Burberry has a great loyal client base across South Africa, so it was important to open the new store in the financial capital.”

Burberry is the first major international luxury brand to open a stand-alone boutique in Hyde Park Corner, although there are several chic multibrand stores in the center with the likes of Chloé, Bottega Veneta, Christian Louboutin, Etro, Diane von Furstenberg, Dries van Noten and Celine in their merchandise mix. The global giants tend to choose the nearby massive shopping complex of Sandton City/Nelson Mandela Square for their monobrand flagships in Johannesburg. For example, Louis Vuitton, Cartier and Gucci all have their stores there.

According to Surtee, the timing of Burberry’s Johannesburg opening was led by “being able to secure a great space in Hyde Park. Both Sandton City and Hyde Park Corner are leading fashion shopping destinations with strong client bases. But Hyde Park presented a better retail opportunity for us at the moment.”

It would appear that Surtee made the right decision. While declining to divulge sales figures or projections, he remarked that there has been “a great response to the Burberry store in Hyde Park with a lot of excitement and strong traffic in-store. Our customers are diverse, which is aligned with our democratic positioning globally. It is accessible luxury.”

The store’s windows and displays lean heavily toward classic items featuring the brand’s signature check pattern on everything from bags and shoes to scarves, ties and raincoats. Surtee said that both the Cape Town and Johannesburg stores carried the Burberry London and Burberry Brit collections for men, women and children, as well as fragrances, timepieces and eyewear. “Pricing,” he added, “is aligned with the UK.”

Among the bestsellers are “the iconic trench coat, which is always a favorite, along with some of the great bags and scarves from our spring-summer 2012 collection.”