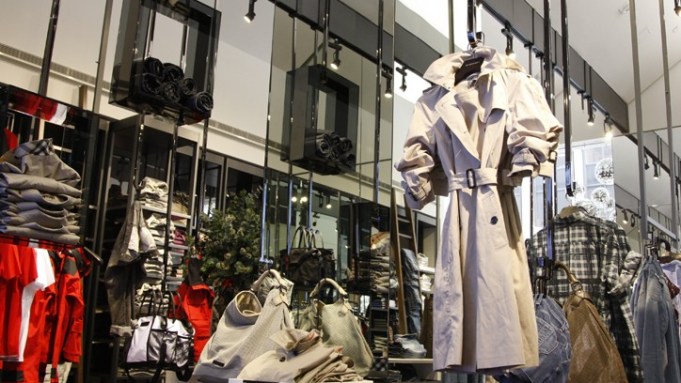 NEW YORK — Burberry has brought its new London and Brit attitude to Manhattan.

The brand is opening two stores under those names today at 444 Madison Avenue at the foot of its Manhattan headquarters, which was inaugurated in May with the lighting of three neon Burberry signs atop the building.

These aren’t just another pair of store launches for Burberry, which has 62 units in the U.S. and Canada. The two stores, which flank the headquarters entrance, mark the first Burberry Brit and London stores in the world, and highlight a branding strategy initiated by chief executive officer Angela Ahrendts and chief creative officer Christopher Bailey. The move clearly delineates the Burberry business into the Prorsum, London and Brit labels. Prorsum representing runway fashions, London the tailored, wear-to-work portion, and Brit its casual, weekend lifestyle aspect.

Ahrendts explained the recession had triggered the company’s decision to rethink its merchandising approach.

“Christopher and I sat down and said, ‘let’s do what is right for the brand,’” she said. “It’s not about repricing and not about repositioning. Let’s do something a little more innovative, let’s relabel the largest part of the Burberry business.’”

“We were relabeling the casual part of the apparel business, as well as contemporizing the assortment, so we introduced a whole new denim strategy and some new branding platforms that we pulled out of the archives and Burberry Brit was born,” Ahrendts said.

Both stores, at 1,500 square feet each, unveil a new retail concept for the company.

“We designed the stores to have their own individual expression and identity reflecting our customers’ different attitudes and needs,” Bailey said. “The stores are modern and unintimidating with digital technology used to heighten the experience for the consumer.”

Both units have a modular decor that is flexible. The Brit store features merchandise displayed graphically from black chrome fixtures suspended from the ceiling. The space is loosely reminiscent of a library, with ladders leaning against display shelves and items such as white “Kensington W28” denim pants hung over the ladder steps. The store offers a casual assortment of women’s and men’s merchandise, including a wide range of denim offerings, Burberry plaid shirts, plaid accessories and outerwear.

The merchandise is presented against a matte black chrome and white color palette environment, accented with timber floors, and a giant, floor-to-ceiling digital screen showcasing the new “Art of the Trench” video, look book and shots from the recent advertising campaign featuring Emma Watson.

The London store, meanwhile, has a warmer, lounge-like feel, with timber-paneled walls, polished black chrome fittings and smoked glass furniture. It offers Burberry London’s ready-to-wear for men and women, including the classic Heritage trenchcoats displayed behind a glass wall.

In both stores, the entire stock is available on the floor, often stowed behind fixtures that can easily be pulled out.

Ahrendts said the format also serves as an example for Brit and London in-store shops. She added such units are under negotiation, but in the U.S., Saks Fifth Avenue already opened a London in-store shop and is planning to open a Brit shop this spring. Bloomindgale’s just doubled the size of its Burberry department, with half devoted to Brit and half to London.

“[Stores] can see the large version and they will get the mini-me versions — shop-in-shops — in the store,” Ahrendts said. “That’s why we are also opening them for New York market. We will be meeting the wholesale customers in the stores before they come up to the showroom.”

A second Burberry Brit store is to launch in Santa Monica, Calif., next year, and the company is in talks to open two such stores in London.

Madison Avenue between East 49th and 50th Streets isn’t exactly a haven for luxury fashion brands, but Ahrendts said that it was part of the appeal.

“We thought therein lies the opportunity, there is so little there that is exciting,” she said. “There are such high demographics walking the sidewalks every day. We just thought our customer will get what these are and with all the tourists in the city, how wonderful to put something brand new that is nowhere else in the world at the base of the headquarters.”

Ahrendts declined to disclose sales projections, but said she expects productivity comparable to other Burberry stores. Burberry already has Manhattan units on Spring Street in SoHo and on 57th Street.

Last week, Burberry Group reported revenue in the first half rose 6.1 percent to 572.4 million pounds, or $910.1 million, boosted by favorable exchange rates and nonapparel, which was the strongest performing division in the half. At constant exchange rates, however, revenue would have fallen 5 percent. Retail sales accounted for 54 percent of revenue in the period, compared with 45 percent last year.

“In the middle of a recession, you have to be a little disruptive,” Ahrendts said. “You have to do things a little bit differently, shake it up a bit, and have some newness and excitement and create the demand.”