The runway show marked the opening of the brand's largest flagship in Asia, located in the new Kerry Centre on Nanjing Road. 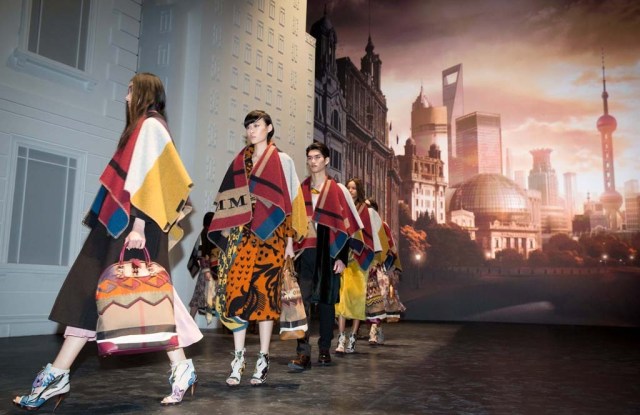 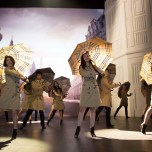 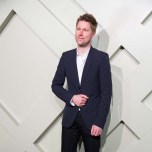 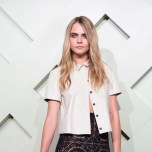 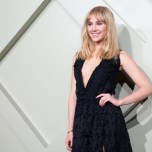 SHANGHAI — Burberry brought a touch of Broadway showmanship to this Chinese city on Thursday night, an indication of how important the market is to the British luxury brand.

The event was meant to mark the opening of Burberry’s largest flagship in Asia, located in the new Kerry Centre on the high-end shopping street of Nanjing Road. It also coincided with the company unveiling its own digital shop on Chinese e-commerce giant Tmall, which is owned by Alibaba Group Holdings. Burberry will be the first luxury brand to have a digital store on Tmall.

During an exclusive interview in the three-story space, which is virtually an exact replica of the brand’s store on 121 Regent Street in London, Christopher Bailey, Burberry’s chief creative officer and chief executive officer designate, said the brand chose Shanghai for its next big event because it has been underrepresented in the city. In the past year or so, Burberry has closed some existing locations and opened four new retail spaces in Shanghai.

“We did not feel we were represented in the right way in Shanghai,” Bailey told WWD. “We found some great real estate. The openings happened to be consecutive but we wanted to make a bold statement in Shanghai and build something that really reflected the totality of the brand.”

Of Burberry’s 25 global flagships, five are in China. The brand bought back its business on the Mainland from its franchise partner in 2010. Burberry is in a total of 36 cities in China, including a flagship in Beijing that was opened in 2011.

Bailey declined to speak about his upcoming role as Burberry’s ceo. He will succeed Angela Ahrendts, who is joining Apple Inc.

While Bailey declined to disclose sales figures in China, he said the country continues to be “an incredibly strong market” for the brand.

“We see an appetite for a consumer loving what we stand for in terms of heritage and history,” he said. “Something that has traditional roots, yet something that is moving forward. We reflect what is happening here. There is a strong history in China, but it is moving forward very fast. That reflects our DNA. There is a natural symmetry with our brand and what is happening in China.”

Bailey said that even though he comes to China once or twice a year, he is still amazed by the pace of change. “People now want to know the details behind our products,” he said. “That kind of interest behind the product is important here — a familiarity that is stable but not stuck in the past. That is moving forward. We are finding that really resonates. Something kind of old and also something new.”

In the digital space, Burberry arguably continued to push digital boundaries — and cover all of its bases in the Chinese online digital space. The brand worked with Tencent Holdings Ltd., owner of WeChat, a mobile app similar to Whatsapp, to create customized content for the show. Followers of Burberry’s brand page on WeChat (Weixin in Chinese) could vie for free tickets to the event, engage with an interactive digital experience before the fashion show and have access to footage from the show.

The show Thursday night comes three years since Burberry held its last event in China. That event, in Beijing, was digitally immersive, emotive and, above all, memorable. Guests stood in a pitch-black space, surrounded by holograms of London and the different seasons that encompass the city. Music from Adele played while models showcased Burberry’s classic and more contemporary collections. It was Burberry in the 21st century. And the brand chose to showcase that in China, arguably the home of the most digitally connected consumers on earth.

On Thursday night in Shanghai, Burberry topped that show with something akin to a Broadway production. The Shanghai event was staged at an old shipyard next to the Huangpu, a river that, like the Thames, cuts through the heart of this city of more than 20 million. The inside of the space transformed into a standing-room-only theater. Arguably a bit Broadway kitsch, Act 1 of Burberry’s Shanghai debut started out with a musical ensemble of male models dancing in classic trenches and black suits with iconic Burberry umbrellas, followed by a female dance ensemble, also in the signature trenches, that reminded one of “Raindrops Keep Falling on My Head” from “Butch Cassidy and the Sundance Kid.”

There was then an act of purely digital advertising of lipstick, blush and other cosmetics projected on walls surrounding attendees (Burberry recently took its cosmetic business in-house instead of using a third party for its beauty lines). But it was the finale that made for another event that likely will be remembered until the next one. Holograms of the changing seasons of the London skyline blended with the ultramodern skyline of Shanghai while models showcased Burberry Prorsum’s fall collection, “Bloomsbury Girls,” alongside a live performance from British singer-songwriter Paloma Faith. Other musical artists included British musicians Ed Harcourt and George Ezra.

The show concluded with British model and actress Cara Delevingne flying above the audience — like a Burberry-clad Mary Poppins.