Two years in the making, the multi-level London flagship is the first and only to showcase the brand's entire merchandise offer. 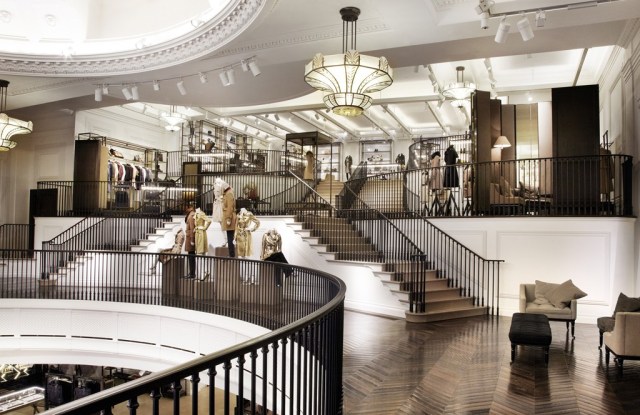 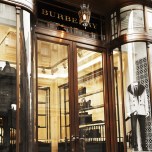 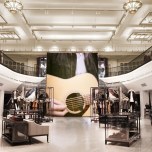 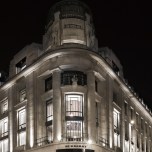 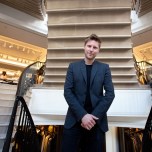 LONDON — Burberry is ready for its 360-degree close-up.

The brand will today officially unveil its largest store, the first and only showcase of its entire merchandise offer. In an unplanned twist, the opening comes just 48 hours after the brand revealed that same-store retail sales had begun to decelerate across the globe, and that year-end profits would suffer.

Two years in the making and housed in a space at 121 Regent Street formerly used as a theater and a cinema, the new store aims to blend a brick-and-mortar experience with a digital one, and to woo customers with video entertainment, live events and digitally enhanced service. It is near Savile Row and the London flagships of Abercrombie & Fitch and Gieves & Hawkes.

“It’s the physical incarnation of our Web site, the hub of everything to do with Burberry,” said Christopher Bailey, the brand’s chief creative officer, who was perched on one of the store’s bespoke, brushed canvas sofas.

He added that the unit, which spans a total of 44,000 square feet, with 27,000 square feet of selling space, will also be used as a “test hub and template” for future Burberry units, such as the 14,920-square-foot store that’s set to open in Chicago in November.

The fixtures and fittings have all been custom-designed, with the exception of the original Art Nouveau hanging lamps in the main hall, which came with the building.

There is certainly no lack of drama at the new Burberry, which spans four floors and feels more like a department store than a brand flagship. The main hall, which once housed stage and screen, is 37 feet high and capped by a vast dome with stained glass panels. It is home to watches, eyewear and the Burberry Brit collection.

It also features a hydraulic stage to be used for live acoustic events and performances, and a giant indoor retail screen that beams out Burberry Acoustic videos and runway-show footage.

There’s a sprawling shoe gallery on the multitiered mezzanine that overlooks the main hall, the “Lantern Room,” which boasts another domed ceiling and a skylight. The 13 collections on offer include Burberry Bespoke, the trench-making service which until now has only been available online; Burberry Beauty, the makeup and cosmetics line, which has its own sales area and entrance on Regent Street, and a separate space on the mezzanine for trenches.

The shop floor and dressing rooms feature an RFID wireless data transfer system that allows customers to pop a bag or coat onto a specially rigged panel, which activates a video that illustrates the craftsmanship behind the product.

Bailey, who served as the new store’s creative director, said he wanted the overall space, which was built in 1820, to be a celebration of British craftsmanship. Burberry tapped some 50 British trade companies to create the handmade furniture in different shades of “trench” dotted around the store, the glass lanterns, the gold leaf lettering above changing room doors and the delicate replica moldings in nearly all the rooms.

The store comes as the company — and perhaps the luxury sector as a whole — faces stronger headwinds in the months ahead. Burberry’s share price fell nearly 21 percent on Tuesday after it told investors that adjusted pretax profit in the 12 months ending March 31 would be “around the lower end” of market expectations. It said same-store sales in the second quarter were stalling against a background of tough comps and a challenging environment for luxury. The shares fell another 1.5 percent Wednesday to close at 10.72 pounds, or $17.26 at current exchange.

Erwan Rambourg, a luxury analyst at HSBC, attributed part of the slowdown to an increasingly discriminating consumer.

“There is a transfer of market share to other brands in the sector…like Prada,” he said, adding that “the faster-than-expected sophistication of the Chinese consumer may be hurting Burberry, which still has a high logo content and wider [retail] distribution” in China than Louis Vuitton and Prada.

Rambourg added that Burberry’s apparel category has been historically less resilient than the average of the industry, and flagged a lack of operating leverage at the company in the short term.

HSBC and other analysts are also eager to know how Burberry plans to handle its fragrance and cosmetics business after having cut short its license with Inter Parfums in July.