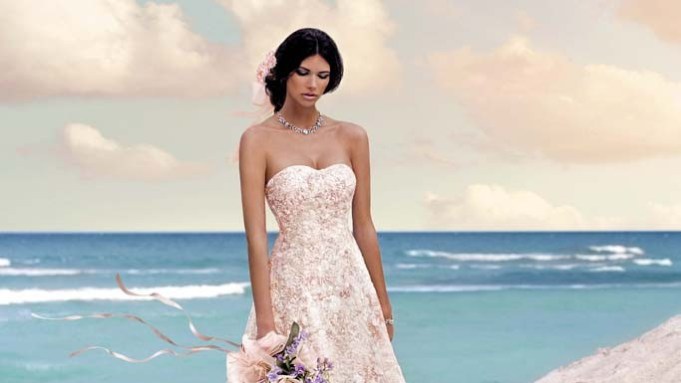 NEW YORK — This week’s bridal market has yet to start, but Vera Wang already has shaken up what is a typically serene scene by revealing her plan to post a short film on Sunday instead of staging a fashion show.

With the doors of her new Beverly Hills boutique having only been open for a few days, the second floor’s bridal area reflects how the designer has stepped up her bridal business in advance of the company’s 25th anniversary next year.

In the midst of wrapping up the designs for her new bridal collection, Wang shot her debut short film for bridal with director Gordon von Steiner on Monday. “This is a very new way to reach brides for me. I wanted to take the time to bring my vision to them,” she said.

Given the timing of this month’s bridal market, it can be challenging to get preferred models who are often off doing commercial work after being in Europe for the ready-to-wear shows, Wang said. By posting the film online and playing it in her bridal boutiques, the designer aims to attract thousands more than she would have by showing the collection in her space overlooking Madison Square Park. “By producing this film with sound and music and with movement, we’re really bringing another level of inspiration to the clothes,” Wang said.

Another twist on bridal e-commerce is being provided by Weddington Way, a new company started by Stanford University M.B.A.-er Ilana Stern. Her site’s extensive collection of bridesmaids dresses, accessories and ties for groomsmen is meant to simplify shopping for the bridal party with the help of a complementary online personal stylist and a virtual showroom.

Just as brides are increasingly more inclined to do their homework online before they even step foot in a store, bridal designers seem to have created a more efficient market week schedule. Thursday morning, Angel Sanchez will try something new by presenting vignettes inspired by vintage covers of bridal magazines. That afternoon, in her Fifth Avenue showroom, Reem Acra will be among the first major designers to show. Anne Bowen will also get an early start, though she has changed her venue to The Essex House’s Petit Salon.

Rather than have most of the shows strewn over the weekend as has been the case for years, a number of designers have opted to show Friday. Oleg Cassini Inc., Oscar de la Renta, Marchesa, Monique Lhuillier, Rivini by Rita Vinieris and Carolina Herrera will help get the week off to a fast start. As part of their ongoing plan to place a greater emphasis on their October bridal show, Mark Badgley and James Mischka of Badgley Mischka will sit out this season.

Champagne corks will be flying before Friday morning’s runway show at the Oleg Cassini town house on the Upper East Side. The company, which does 750 bridal shows on the road each year, racked up retail sales of more than $1 million in January for one of its gowns, according to creative director Peggy Nestor.

This season’s theme “celebrates the polished, opulent, celebratory bride who seeks perfection,” she said. One of the satin gowns that will be modeled later this week has 50,000 pearls, and the show’s setting — a soothing pastel-colored French drawing room — should also relay the message for overachieving brides.

Alberta Ferretti will have a few days of private appointments at the Aeffe USA town house on West 56th Street.

While others, like Lela Rose, will wait until next week to show, some of the weekend shows will include Naeem Khan, Christos, Junko Yoshioka and Anna Maier.