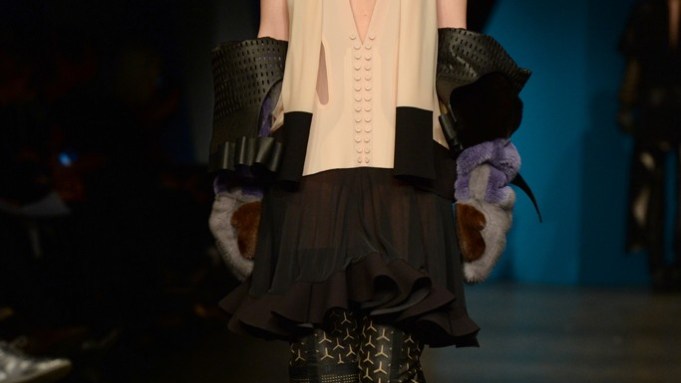 The six-day event last month — a day longer than previous seasons — had a focus on China with a delegation of Chinese designers, models, buyers and journalists. Chinese New Year was celebrated on Jan. 28 with a fashion show at the old stock exchange followed by a performance of a Chinese girls’ drum orchestra called Red Poppy Ladies Percussion.

“Exports went up 2 percent in the first 10 months of 2013, with a total turnover of 23.6 billion Danish kroner [$4.3 billion at current exchange] compared with the first 10 months of 2012,” said Torben Hoffmann Rosenstock, chief executive officer of Wear Denmark, the Danish textile organization. “They were mostly driven by exports to Germany, Sweden and Norway, whereas China, Brazil and the U.S. were not so much represented. We see a big potential for Danish companies going there.” Hoffmann Rosenstock said he expects a steady growth of 2 to 3 percent for the export market in 2014.

Hers was one of the 40 women’s and men’s labels showcased this season, including rising designers Freya Dalsjø, Anne Sofie Madsen and Han Kjøbenhavn, who last year opened a store on Prince Street in New York. Regulars included Wood Wood, Baum und Pferdgarten, and Henrik Vibskov.

The By Malene Birger show was an event, as it was the last with the designer and founder. She passed the torch to Christina Exsteen, who took the bow alongside Birger. Meanwhile, another brand, Munthe, relaunched. “These were the first generation of brands to think of themselves as designers, who put together a runway show [and]…were well known. Up until then, it was more brands’ names. In that sense, [a new designer and a relaunch] mark a change in Danish fashion,” explained Eva Kruse, ceo of Copenhagen Fashion Week.

Copenhagen International Fashion Fair, one of the three trade fairs — along with Gallery and Vision — continued with its major rebranding, enlarging its Crystal Hall and showcasing a mix of avant-garde Scandinavian, British and U.S.-based brands such as Freya Dalsjø, Lou Dalton and Martone Cycling Co.

“Scandinavia is an unknown territory for us,” said Dalton. “We aren’t sold here yet. That’s why we are here.” The men’s wear designer said she is to showcase six styles of women’s white shirts during London Fashion Week. “I have no interest in going into women’s wear. But I am sick to death of buying a men’s shirt when I actually produce my own. It is exactly the same as it would be for men’s; I use the men’s block. I just narrowed the shoulders and shortened the length by about an inch.”

Brazilian-born publicist and brand consultant Lorenzo Martone was in town exhibiting his Martone Cycling Co. “The countries that visit Copenhagen fairs like Finland and Iceland are all very ‘pro bike’ for different reasons — the sustainability angle, the lifestyle — it is part of the culture,” he said. Martone unveiled three new colors of bikes — denim, orange and gray — and a new rain cape.

Gallery reported 11,615 visitors, down from 12,684 visitors in the same period last year. “Three years ago, we had 76 percent Danish visitors, now we have less than 50 percent of Danish visitors,” said Gallery ceo Christian Gregersen. Swedish, German and U.K. visitors represent the lion’s share, he said. “We have about the same amount of buyers coming, but more doors. Some small shops are having a hard time as sales are shifting online.”

Copenhagen-based label Foreign Affairs, another exhibitor, collaborated this season with Danish artist FOS on a scarf reading “Another place yet a place.” The artist, whose real name is Thomas Poulsen, designed furniture for Céline’s flagship set to open in London in March.

Foreign Affairs designer Maria Meilgaard said she was inspired by the Rorschach test, used by psychoanalysts, for her prints. She worked with a palette of black and cream, magenta and green shades for fall. “You can link back the trend in cream to Céline’s knitwear in cream,” Meilgaard said.

Vision, which did not provide visitor numbers, revamped its offer to focus on women’s wear. The show named Copenhagen student Giorgi Rostiashvili from the Royal Danish Academy of Fine Arts winner of its Designers’ Nest competition. The prize gained exposure when Lady Gaga flashed a pink fur by Designers’ Nest talent Huang Ting-Yun on “Saturday Night Live.” She also wore two other looks created by the students presented to Designers’ Nest in August.

Buyers were upbeat about the region’s fashion offerings.

“We are consistently impressed by the innovative creativity and excellent quality of Scandinavian fashion like Wood Wood and Henrik Vibskov. Through our Web site TheCorner.com, we have great working relationships with Acne and Our Legacy,” said Alessandra Rossi, commercial director of Yoox Group.

Among trends that Rossi noted in Copenhagen were “new and sophisticated declinations of classic knitwear styles mixed with technical fabrics, leather and the focus on accessories.”

“Of the key trends coming out of the shows, you see a lot of quilts, animal prints, especially snake,” noted Margrethe Dal Lehrmann, buying director at Danish department store Magasin. “Leather is very strong, for instance, soft jeggings in leather, and so is fur.”

She saw a lot of gray, black and, at Malene Birger’s show, a “very beautiful green.”

“We are very minimalist, but we have a strong identity. We just see the tip of [the] iceberg in terms of Danish designers going international. I can see many of them going abroad — West and East,” Dal Lehrmann said.

The next Copenhagen Fashion Week is to be held from Aug. 6 to 10.

Another signal of the vibrant fashion scene in the region, WWD has learned that Paris-based Numéro magazine is cooking up a Scandinavian edition for the first half of the year.