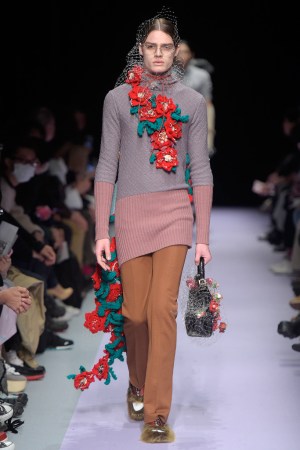 TOKYO — Good but needs to get better.

Buyers weighed in on the six days of Tokyo Fashion Week, saying that while some of the collections were strong, there are still things Tokyo designers need to work on in order to compete on the world stage.

“I want each designer to put forth their own strong originality. But how they do that is in the details, the designs, the way they choose their materials…they have to work hard to not be beat in these areas by designers from other countries,” said Yuji Takahashi, a buyer of men’s wear and sportswear for Isetan Mitsukoshi. “Now street fashion is very strong in Japan, but I also have the impression that actual fashion is a bit weak. In this area, China and Korea are becoming quite strong, so I want the young generation of designers to make things that are a bit more stylish and to become more internationally minded designers.”

Several buyers also mentioned the importance of having a strong identity and maintaining that from season to season, while still making collections that look different enough to be interesting to customers.

Sarah Andelman, creative director of Colette, echoed this sentiment. She was in town as one of the jury members of the Tokyo Fashion Award.

“It’s a subtle balance between creativity and wearability and something unique with authenticity,” Andelman said. “In all new collections we are seeing, not only Japanese but French, American…there are so many brands today, you really have to do something so personal and so unique to be noticed I think. And it’s not trying to be commercial, trying to satisfy a clientele. You have to bring something from your heart, and then the magic happens.”

Many attendees of this season’s Tokyo Fashion Week lamented the lack of really exciting shows, now that brands such as Facetasm, Anrealage and Sulvam have started to present their collections outside of Japan instead.

“Brands such as Facetasm and Sulvam didn’t do shows this time, and I think that’s a big [change],” said Motofumi “Poggy” Kogi, director of United Arrows & Sons. “So I think the next generation has to really work hard from now on. It’s a real time of change, so in that sense, I get the feeling that from this season the brands have a great opportunity to drum up excitement.”

Of the brands that did show in Tokyo this season, common favorites included Writtenafterwards, And Wander, Mr. Gentleman and Suzusan, which presents its collections through exhibitions rather than shows.

“They say that brands like White Mountaineering, which use outdoor and sports influences, are gaining popularity around the world,” Kogi said. “It’s like a continuation of the ‘luxury camping’ trend; it’s one result of that. And the designer for And Wander used to be a designer at Issey Miyake, so he can also make proper clothes while still continuing to incorporate these influences. I’ve really been noticing his work. I thought it was surprisingly rare to see a designer incorporating outdoor elements into actual fashion.”

Kogi said that from fall, he will also be picking up Coohem for the first time. Owned by a manufacturer of unique tweed-like knitwear, until now it has only made women’s wear, but will be making a men’s offering specially for United Arrows & Sons. Some of Kogi’s other favorite collections included Writtenafterwards and Sulvam.

Takahashi said his favorite Tokyo collections this season were Writtenafterwards, Ethosens and And Wander. His budget for Japanese brands this fall is up nearly 10 percent over a year earlier, and one new brand he will be adding is a very small one called Almost Black, which hasn’t yet staged a runway show.

“In terms of impact, Writtenafterwards had a very curious show with a strong individuality. I thought it was the kind of thing you wouldn’t see from an international brand, so from that point of view, I thought it was very good,” Takahashi said. He also noted that he appreciated the minimalist style of Ethosens, which he sees as a rather rare brand in a city where streetwear and everyday clothes are the norm on the runways. He hopes to see more of this kind of thing in the future.

Andelman only arrived in Tokyo for the last few days of fashion week, but she said she saw potential in the young designers who presented their collections in the Tokyo New Age show.

“I really liked the energy from Keisuke Yoshida and [Ryouta] Murakami; it was something strong,” she said.

This is the second season Andelman has been invited on behalf of the Tokyo Fashion Award, and she said she has seen some improvements over the year since she was last in the Japanese capital.

Miyako Sekimoto, fashion director at Matsuya, agreed that the quality of Tokyo designers’ collections and shows is improving with each season.

“Over these few years, Tokyo designers [have started] doing what they want and what is good for Japanese markets, so they decided to go their own way, which is coming from Tokyo’s streets, so that’s a big change,” Sekimoto said, mentioning that just a few years ago it was common for Japanese designers to imitate what European designers were doing.

For international buyers, the weak yen is helping to make Japanese brands more attractive, although that doesn’t necessarily mean they wouldn’t have bought them otherwise.

“To be honest, it will [make it easier to buy] for the first season, but that wouldn’t be a reason why I would pick up a Japanese brand because Harvey Nichols likes to nurture brands and grow them, and you can’t rely on an exchange rate always remaining in your favor,” said Alison Chisholm, a buyer of contemporary collections and women’s wear for Harvey Nichols. “So I think it’s better to almost look at the pricing as a package and also make sure that that product would sell if it was at the norm rather than at a weaker price point.”

Chisholm was one of six international buyers invited to Tokyo by the Japan External Trade Organization, although most came in the week following the shows and focused on exhibitions instead. Of the few brands that Chisholm had seen, she said Suzusan, which makes cashmere pieces dyed using the traditional Japanese shibori (tie-dye) method, was one of her favorites.

Andreas Murkudis, another invited buyer who owns a few boutiques by the same name in Berlin, is also a fan of Suzusan. In addition to fashion, he planned to use his time in Tokyo to seek out new and interesting designers of interior goods, furniture and products. But like other buyers both domestic and international, he said he sometimes feels there’s a lack of individuality among Japanese brands.

“I am missing the independency sometimes. What you see often is a European-oriented design language, which is not bad, but under all that the individuality gets lost. I always appreciate when designers speak from their imagination rather than losing themselves. In my opinion, the Japanese fashion designers have such strong and inspiring personalities and visionaries in design — they should take those as role models,” he said, referencing Rei Kawakubo, Yohji Yamamoto, Issey Miyake, and more recently Chitose Abe of Sacai, Junichi Abe of Kolor and Jun Takahashi of Undercover.

Kevin Carney, owner of Mohawk General Stores in Los Angeles, who was also brought to Tokyo by JETRO, said he thinks that the universality of Japanese design can appeal to international customers.

“I think sometimes European brands, or all brands for that matter, sometimes they design for, like, a European guy. And for Japan, obviously sometimes they’ll design for a very Japanese guy, but then also you’ll find these brands that are just sort of designing for, like, the everyday guy,” he said. “It’s really nice quality, it’s beautiful fabric.…The fit is always an issue, but some brands I think are going more into a European fit, an American fit and a Japanese fit with their specs, so it’s getting easier to kind of fit it into the store.”

This season saw 686 buyers register for Tokyo Fashion Week. Of those, 398 were from Japanese retailers and 289 represented stores in some 29 countries, including China, Hong Kong, the United States and Canada. There were more than 20,000 visitors to Tokyo’s runway shows in total.