Streetwear, tailoring, accessories and a load of patterns and colors were the big trends, and buyers said they are ready to increase their London budgets. 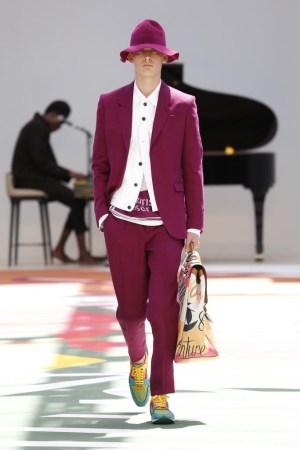 LONDON — Buyers from both sides of the Atlantic gave London a big thumbs-up this season for what they saw on the runway and for the organization of the three-day showcase that ended Tuesday. Streetwear, tailoring, accessories and a load of patterns and colors were the big trends, and buyers said they are ready to increase their London budgets in response.

This story first appeared in the June 19, 2014 issue of WWD. Subscribe Today.

“The main thing is that London is really maturing and it’s getting very strong and we are taking it as seriously as we take the women’s shows,” said Sebastian Manes, buying and merchandising director at Selfridges in London. “We plan to at least double our budgets this season for London,” he said, adding that the company planned to add to its roster of London designers.

Eric Jennings, vice president and fashion director of men’s wear, home, food and gifts at Saks Fifth Avenue, agreed that London Collections: Men is becoming “a force to be reckoned with.” And Jason Broderick, Harrods’ fashion director of men’s wear, sports and watches added: “I think this being the fifth season, [London Collections: Men] has definitely put a stamp on the fashion calendar,” he said, noting that the week has “newness to offer.” Averyl Oates, fashion director of Galleries Lafayette, described London as “a very optimistic season, pushing boundaries with contrasting color, prints and newness in shapes,” she said, noting the retailer is “spending more on men’s wear, especially men’s accessories and shoes, which are booming categories for us.”

Meanwhile, Nelson Mui, men’s fashion director at Hudson’s Bay and Lord & Taylor, said following the shows, the store has started up conversations with London labels and tailors that will eventually bear fruit. “We came here to start a dialogue and see what would make sense for us,” said Mui. “We don’t have the British Savile Row tailoring, and we are particularly interested in updated tailoring and contemporary sportswear,” he said. And Mui, who studied fashion at Central Saint Martins under the late Louise Wilson, said the wares showcased in London are a far cry from his student days. “I was always used to London being conceptual. It’s surprising to see it all pulled together,” he said.

London’s take on streetwear garnered much praise from buyers, with Moschino’s show being singled out by many. Manes called the collection “really strong,” and praised its creative director Jeremy Scott’s play on iconic designer logos such as Chanel and Louis Vuitton. Darren Skey, men’s wear buying and merchandising manager at Harvey Nichols, also called out Moschino for its “energy and fun,” along with collections by Lee Roach, Liam Hodges, Common and Matthew Miller. Manes at Selfridges also described Sibling as “borderline couture and really architectural.” He said the store was impressed with Craig Green’s Japanese-inflected collection that featured layered kimonos, and that Lou Dalton and Nasir Mazhar were also strong.

Mui echoed the praise for streetwear, saying that labels including Moschino and Craig Green took “street and athletic influences to another level. They pulled it together and elevated it.” He pointed to J.W. Anderson’s “polished and wearable” collection that included needlepoint tapestry landscapes on tops, and to Astrid Andersen’s sweatshirts done in panne velvet. Among the other standouts, he said, were Lou Dalton and Kent & Curwen. Of the latter, he said: “Simon Spurr translated street energy into a sartorial statement.”

Saks’ Jennings was also a fan of the streetwear at the London shows, along with the idea of the “suit as the foundation of sportswear,” which he said emerged as one of the big messages of the season. He mentioned Burberry among brands at the forefront of colorful tailoring, and what he dubbed “fashion tailoring.” He also cited an emerging trend to fuller volumes, such as oversize T-shirts and shorts.

Broderick at Harrods was another buyer who singled out Burberry for its “bold color,” along with Tom Ford’s “great offer of denim and brilliant sportswear.” Broderick also praised Gieves & Hawkes’ collection, which he said “reached new heights of luxury.” Broderick noted that Harrods will also be picking up Thom Sweeney’s ready-to-wear tailoring collection for spring. “It wasn’t overly complicated, and their fabric choices were perfect,” said Broderick of the labels’ designs. He also praised Alexander McQueen, as did Oates at Galleries Lafayette, with the latter pointing to the label’s “bold colors and prints…and beautifully crafted Bermuda suits.” Oates also voted for Craig Green’s “pure and experimental approach” and J.W. Anderson’s “masterful…play between masculine and feminine.”

Mei Chung, men’s wear buying director at Browns in London, was another fan of Burberry for the label’s “linen pieces and those beautiful colors. I loved the way [Christopher Bailey] played with denim, turning a jean jacket into a tailored blazer with a velvet collar,” she said. Chung, who also liked James Long, Astrid Andersen, Liam Hodges and Craig Green’s collections, said Browns men’s wear budget was up 30 percent this season, and that 20 percent of the overall budget would be spent in London.

Zoran Bosanac, men’s wear buyer at Maria Luisa, which has stores within Printemps in France and in Qatar and China, said his store has been following London for at least a decade and it’s always been full of energy and ideas. He called this season in particular “very, very beautiful,” and called out labels including Sibling for its outerwear and knitwear. He also named Lee Roach, J.W. Anderson, KTZ and Moschino as among the highlights.

Karen Vernet, general merchandise manager of men’s apparel, homewares and private label at Printemps in Paris, cited Jonathan Saunders, KTZ, J.W. Anderson and Moschino as her favorite collections of the season, and said she’s seen London’s collections become “more mature and structured season after season.” She pointed to LVMH Moët Hennessy Louis Vuitton having recently taken stakes in Nicholas Kirkwood and J.W. Anderson, and Kering in Christopher Kane, as evidence of London getting “the attention it deserves.”