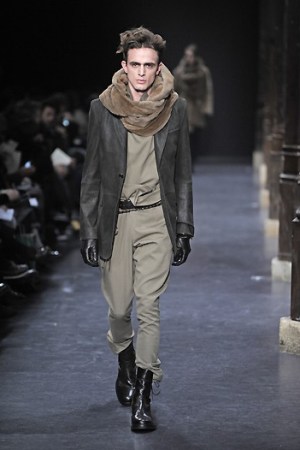 “There were clearly salable elements shown in almost every collection — wearable and understated,” said Eric Jennings, vice president and men’s fashion director at Saks Fifth Avenue. “Some are saying ‘safe,’ but I say ‘smart.’”

Buyers praised brands for responding to a tough consumer environment by offering a wider selection of price points. Here is what they said about the Paris collections and their outlook for the second half.

Nickelson Wooster, men’s fashion director, Bergdorf Goodman and Neiman Marcus: “We particularly like the balance of tailored looks and refined sportswear. Standout shows are Lanvin, Rick Owens, Dries Van Noten, Balenciaga, Junya Watanabe. Lanvin, in particular, was exceptional as it achieved the perfect balance of tradition and fashion. Balmain, after only a couple of seasons, is becoming someone to take very seriously in men’s; we expect it will be as influential as it is in women’s. We see leather, fur and velvet paired with classic tweed and flannel as a great way for a guy to update something in his closet.”

Hirofumi Kurino, senior adviser and creative adviser, United Arrows Ltd., Japan: “There is a very positive feeling, so we are considering increasing our budgets for certain brands already in our portfolio. The very best show was Lanvin. They showed a new silhouette, new details in clothing and new fabrics. It was invention at its best and showed the progress of design, but still very commercially viable. Louis Vuitton also had a very nice show and showed a new direction for the house.”

Tancrède de Lalun, general merchandise manager of women’s and men’s apparel, Printemps: “It wasn’t a revolutionary season. Brands are sticking to what they are good at. After several seasons of reducing our orders, we plan to order roughly the same as last season. Spending will be split roughly equally between Paris and Milan. Confident is not the right word to describe our mood going into 2010, but we remain optimistic. More than ever, customers are looking for value. We are careful to offer products at every price point, and we are increasingly satisfied with our product mix. Brands have clearly reacted by offering capsule collections and lower entry price points.”

Lanita Layton, vice president and general merchandise manager for men’s and men’s footwear, Holt Renfrew: “We feel that the appetite for newness and fashion is picking up, but are still planning the second quarter with a cautious approach. Paris will receive a slight increase this season to address our ‘advanced and early adopters’ in specific regions. Concerns are always deliveries, as this consumer wants to be first. There are wonderful challenges to proportions, interesting fabrications and twists that give the Paris fashion scene its own voice, which showed on the runways.”

Forey Ip, divisional merchandise manager, men’s wear division, Joyce, Hong Kong: “The show I liked most is Rick Owens. He had a very strong silhouette and the impact of the show is very strong with all the coats and all the fur he used. I also liked Raf Simons. He used a lot of Velcro details to adjust to body size and also snaps over the jackets. Juun J. is another show we cannot miss. Everyone is doing tailoring, even those avant-garde designers like Junya Watanabe and Comme des Garçons, and black is a key color. Paris is more exciting, while Milan is more sophisticate.”

Sarah Rutson, fashion director, Lane Crawford: “All the brands that I’ve been buying into — Givenchy, Lanvin, Junya Watanabe, Comme des Garçons, Dries Van Noten — performed very strongly in fall and are off to a strong start for spring. I’m keeping buys level on last season and definitely growing on certain categories. All the brands, bar none, have really worked on their price points here so we’re coming in lower than last season, which is fantastic. Lanvin was spectacular in every category. Knowing that the economy is picking up, we are quietly confident that we know our customer and we’ve got the right mix.”

Kevin Harter, vice president of fashion direction, men’s, Bloomingdale’s: “We found Paris very directional. Bloomingdale’s is ending the season on a high note for 2009, and we have a lot of confidence that we can continue to build momentum based on what we saw here this week. We are being smarter about our assortments in order to make our inventories more productive, but overall we are adding receipts due to the opening of our new store in Santa Monica in August 2010. We felt the collections continued to bridge the gap between formal and casual dressing. Favorite collections included Louis Vuitton, Raf Simons, Junya Watanabe, Viktor & Rolf and Dunhill.”

Ed Burstell, buying director, Liberty of London: “Men’s has been sensational over the last 12 months with very strong sell-through. We plan to increase our budget between 10 and 15 percent. There’s something to buy in Paris — the ones that did it well will have an outstanding season. In our opinion, the best were Ann Demeulemeester, Rick Owens and Dries Van Noten. This season was all about illusion, with heritage a go-go, but for Paris, you could call it heritage realness. It’s not just about having history; it’s about how you leverage it.”

Eric Jennings, vice president, men’s fashion director, Saks Fifth Avenue: “From Junya to Dior to Dries, the lines were moderately toned down, yet still with an artistic flair, staying true to their core essence. Orders will be slightly up from last fall. Overall, we tend to spend less in Paris versus other capitals. But we are seeing some really interesting things here coming out of northern Europe and Japan. We are predicting business will come back strong in the fall. We are seeing the return of our classic customer. Tailored clothing is picking up, as well as the luxury brands at the top of our matrix.”

Noriyuki Hashizume, merchandising manager, Isetan, Japan: “The visual presentations were not as strong, compared with last year’s, which were very powerful. Things have calmed down a little. Alexis Mabille has been my favorite presentation so far this season. We are just starting with him. Paris has been better than Milan. Milan is all about real clothes and mass trends, but Paris is more individual. I hope men’s wear sales will pick up this year. During 2009, customers responded to new creations, so we hope the next season will be much better.”

Jason Broderick, men’s wear general merchandise manager, Harrods: “Commercially, brands really pulled it together. While Milan puts commerciality on the runways, Paris had it in the showrooms. Collections are geared for a good buying season. Paris showed a very positive offering. Looking ahead, we have got to rely on consumer confidence, which we believe will be strong. In terms of trends, an outdoor theme emerged as the overriding message and especially at Lanvin, Hermès, Louis Vuitton and Paul Smith, where hiking boots, duffle bags, knapsacks and outerwear were out in full force. Layering was also central, especially at Dior and Louis Vuitton.”

Richard Johnson, men’s wear buying manager, Harvey Nichols: “We have had a marginal increase in budget, single digit. Whereas usually we find Paris more innovative, commercially speaking, this season it was on par with Milan. We have done more buying in Paris so far. We have noticed a lot of focus on opening prices and, in general, the runway collections have been similarly priced to last year. Sportswear was integrated into collections, such as technical fabrics incorporated into suits. Lanvin was excellent. Givenchy was also very strong with sporty jackets in luxurious fabrics.”