As for the individual collections, buyers were universal in their praise for Christopher Kane’s fall collection. 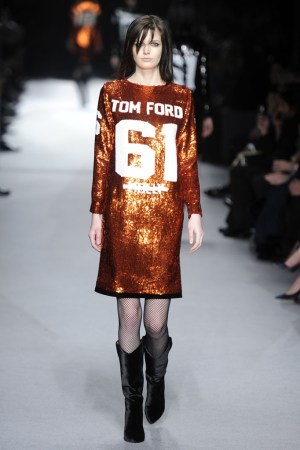 LONDON — Buyers lauded the strong colors, the wealth of fabrications and the plethora of creative, young designers to emerge from London Fashion Week, which ended Tuesday.

“As a hotbed for creativity and out-of-the-box innovative design, London is our top stop on the four-city fashion circuit for finding emerging designer talent,” said Colleen Sherin, senior fashion director at Saks Fifth Avenue. Stephen Ayres, head of fashion at Liberty in London, agreed: “I really believe London delivers the most diverse and interesting mix of brands as part of [its] fashion week. No other fashion capital incubates and shows emerging designers alongside [larger brands] such as Burberry the way London does.”

As for the individual collections, buyers were universal in their praise for Christopher Kane’s fall collection. “[Kane’s] tailoring and knitwear were very strong, the fabrications were interesting and everything looked modern — overall, really sleek,” said Natalie Kingham, head of fashion at Matchesfashion.com.

Suzanne Timmins, senior vice president and fashion director at Hudson’s Bay Co., singled out Kane’s “sculptural dresses,” while Helen David, fashion director of women’s wear, accessories, fine jewelry and children’s wear at Harrods, pointed to the designer’s tailoring, chunky knits and mink. “It was super commercial — and completely unique. You could easily sell at least half of the looks on his runway,” she said.

Simone Rocha, Mary Katrantzou, J.W. Anderson, Peter Pilotto, Erdem, Ashish, Anya Hindmarch, Tom Ford and Burberry Prorsum were also among the collections that stood out for retailers. Ayres called Katrantzou’s collection his “show of the week.” “[It was] such a great move forward, and the craftsmanship involved in the pieces was outstanding,” he said. Timmins also pointed to J.W. Anderson’s “new proportion,” and Jonathan Saunders’ “chunky knits with those gorgeous diaphanous skirts.” She also described emerging designer Ryan Lo’s collection as “vibrant and creative.”

David praised the Erdem collection for being “a really nice move on.” “People who go to an Erdem show expect florals, prints and colors, but this collection was black with subdued colors…the collection was still very Erdem, and very true to his roots,” said David. She also liked Ford’s “more demure” mood and Burberry’s “fresh, beautiful prints.”

In terms of trends, a number of retailers pointed to the rainbow of colors on the city’s runways. Sherin praised London’s “graphic colorblocking [and] winter brights,” along with designers’ use of embellishments and embroideries. “Unlike computerized digital prints, these treatments feel more artisanal and handcrafted,” she said. Ayres, meanwhile, noticed “rich autumnal citrus tones being mixed with navy…to give a new take on colorblocking,” adding that blue was a key color among the collections, in shades “from cornflower to royal.”

Kingham at Matchesfashion.com noted the “longer-length skirt” on many designers’ runways, along with “sleek silhouettes with long sleeves.” “Collections that looked overcomplicated or overstyled weren’t so strong, the clean simple things looked strongest,” she said. David considered the collections “a little more demure, with higher necklines and Sixties styles and lots of below-the-knee hemlines,” also pointing to the “long peasant dresses, like those at Tom Ford.”

Retailers’ main quibbles this season were about some designers’ lack of grounding in what sells. “I would like to see more focus on commerce for the younger designers, as I still feel some of these collections are great for editorial but do not always translate into a commercial proposition for retailers,” said Ayres at Liberty. Kingham at Matchesfashion.com was disappointed by some designers’ neglect for footwear. “A lot of models were wearing shoes that were way too high or that didn’t fit them properly,” said Kingham. “It seems to have become an afterthought, but if the footwear is very high and doesn’t fit well, it can make a really well-put-together collection look shoddy.”

That said, the overall mood of retailers was buoyant. “People are beginning to take the London brands seriously,” said David. “It’s all heading in the right direction.”