The season was filled with modern sportswear and relaxed-yet-sophisticated loose and light tailoring that evoked dreamy summertime ease. 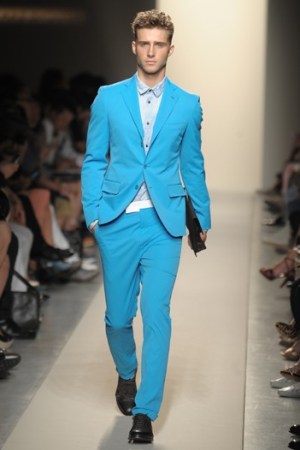 MILAN — With men’s wear on a roll, it’s all about keeping up the momentum.

Milan delivered, pulling off an energetic and upbeat spring season filled with modern sportswear and relaxed-yet-sophisticated loose and light tailoring that evoked dreamy summertime ease. Spring’s pop colors and lively prints, of every variety, are sure to energize shop floors, retailers said, while Seventies and Eighties influences were ever present.

“The look is Riviera-easy, chic and elegant yet relaxed and loose. Classic designs are revisited with a softer spin and easy-going attitude,” said Tiziana Cardini, fashion director at La Rinascente.

“I have this thing where I always judge the mood of the Milan season by the music they play at the Prada show. And it was upbeat,” said Eric Jennings, vice president and fashion director for men’s wear at Saks Fifth Avenue. “Things are looking up and we are not looking back.”

“Not only a spectacular season of offerings — has the weather ever been more perfect here?” said Kevin Harter, Bloomingdale’s vice president for men’s fashion direction, who added that it was one of the strongest Milan spring seasons in years. “The classic tailored companies such as Ermenegildo Zegna and Canali were outstanding, continuing to offer us new suitings in advanced fabrications and incorporating beautiful luxurious sportswear into their collections.”

Buyers praised the diversity of collections, which catered both to tradition and newness. “It’s like a kid in a candy shop: Lots of tastes and flavors and plenty to choose from,” said George Yang, general merchandise manager for men’s wear at Lane Crawford, Hong Kong, who pointed to a new ease in men’s wear with lots of innovation going into ultralight fabrics and effortless constructions. Jackets are poised to be an interesting contender to the mix, he said. “We saw every shape, form and size.”

“Milan has proven to be steady and surprising all at the same time.…Overall, we are very pleased and know we can offer the same level of excitement to our customer,” said John Gerhardt, creative director, Holt Renfrew, Canada.

“Overall, the spring 2012 fashion offering in Milan is strong and creates a good base to build newness,” echoed Tom Kalenderian, executive vice president and general merchandise manager for men’s and Chelsea Passage at Barneys New York. “I was particularly impressed with the sophisticated contradictions of sartorial luxury, blended with a bit of whimsy; evidenced at Burberry Prorsum with the great coats that played on familiar trim details reinterpreted in unexpected raffia.”

Silvia Bertocchi, buyer, men’s and women’s apparel, shoes and accessories, 10 Corso Como, said, “I see a lot of color, from brands like Prada, who showcased a lot of prints and studs, which seems like a bit of a gamble, but actually demonstrates a sense of freedom and shows that men are now more aware and confident about fashion and themselves.”

“The upper casual trend is stronger than ever, with refined fabrics and subtle colors,” said Tancrède de Lalun, general merchandise manager of men’s and women’s apparel, Printemps. “Pants are comfortable, often carrying a low crotch, which gives a slouchy volume. I also saw a lot of two-in-one garments, such as a biker jacket merged with a trench at Neil Barrett.”

As a booming segment for men’s, accessories were a star, retailers agreed, especially hats and printed scarves, while for footwear the espadrille and leather sandal are king. “We’ve seen so many shoes with golf-shoe-like fringing. And we even saw literal golf shoes at Prada,” said Toby Bateman, buying director for Mr. Porter.

Not everything got a thumbs-up, though. Pricing remained an issue, with some lines increasing their spring prices by up to 20 percent given the continued high cotton prices. “We must solve the issue of high prices, caused by the increased cost of materials. This is an absolute must, given that we have more and more international customers,” said Rossi Biffi, owner of Biffi and Banner in Milan.

And there were those who thought some of the more garish looks were out of place given the times we live in.

Hirofumi Kurino, senior adviser, creative adviser, United Arrows Ltd., Japan, said, “Fashion is always about social [trends]. Sometimes people forget about real life. Some of it is fashion for fashion. In Japan, with the nuclear disaster, it’s important for there to be heartfelt spirit in a collection. I don’t like some of this bling bling.”

Said Richard Johnson, head of men’s wear, Harvey Nichols: “In some cases the choice of color was particularly difficult. Primaries works well at retail but certain designers used off shades of mustard rather than yellow, say, or burnt red instead of bright red. We’re all going out with a commercial mind-set, we’re looking to make an impact but also sales.”