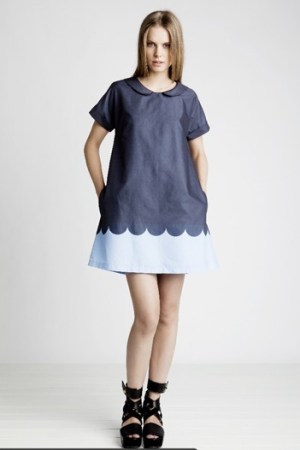 The five-day event culminated on the last day, Aug. 14, with a record-breaking mile-long charity catwalk show along the city’s pedestrian street, Strøget, inaugurated by Helena Christensen and Edun co-founder Ali Hewson. The show presented looks from the fall collections of around 200 Scandinavian brands.

Adam Jagger, a buyer for British e-tailer Asos, which is set to launch its U.S. site in September and French and German sites in October, said the city’s fashion week had become a key event for his team, adding: “It’s a great environment and level of brands….There are a lot of Scandinavian brands coming into the European market and vice versa — we’re taking each others’ influences.”

Jagger said his budget was up “significantly.” Other retailers cited budget increases of up to 20 percent.

Traffic to CPH Vision and the denim and streetwear trade fair Terminal-2 increased 8.9 percent compared with the same session last year, with a total of 22,459 visitors. The designer-focused fair Gallery reported an increase of 4.6 percent, with 11,400 visitors, and a 50 percent increase in international buyers.

Having learned to deal with the crisis at hand, Eva Kruse, chief executive officer of the Danish Fashion Institute and Copenhagen Fashion Week, said brands were feeling more confident. “Companies have had a year to adjust production, trim collections and everything….The ones who are here are the ones who have survived,” she said.

Denim also seems to have bounced back in Scandinavia. “We’ve had a really good kick-start for fall with people reordering fast. The legging has been our biggest enemy, but girls are getting away from that and coming back to denim,” said Kirsi Tarki, area account manager for Levi’s. “Denim shirts and jackets are selling well as the top-to-toe denim look is continuing,” she added.

“I’d like to think the whole cheap denim trend is over,” said Andreas Cannerborg, a buyer for Nääs Fabriker, a 140,000-square-foot lifestyle space due to open late next month outside of Gothenburg, Sweden. His hit list included NN.07, Blue Denim, Replay and Levi’s.

Geraldine Florin, a buyer for Galeries Lafayette in Paris, praised the organization of the shows, but said brands still needed pushing. “I found some really interesting individual pieces, but most of the collections just weren’t big enough for us,” she said.

“I saw that the short has been replaced by the miniskirt and I noticed a lot of fabric combinations, such as leather and suede or wool and leather,” she continued, lamenting the “overdose” of khaki and beige. “Spring will be about colorful, flashy Eighties’ hues.”

Applauding the quality of the runway shows, visitor Barbara Kramer, co-founder of the U.S.-based trade show Designers & Agents, said it felt like “someone pumped oxygen into the event” compared with this time last year. Kramer listed among standout collections Rützou, Noir and Peter Jensen and, for accessories, Lomme bags and Line & Jo jewelry.

Following a “negative spiral,” Martin Gjesing, Acne’s brand director for Denmark and German-speaking regions, confirmed business in Scandinavia was definitely “opening up.” For fall 2010, the brand closed its strongest sales season yet for the region. Acne, which launched a Thierry Lasry-produced women’s sunglass line for spring, this fall plans to open a 12,700-square-foot store in Paris, in a garage located near the hip concept store Merci. Katerina Jebb has been commissioned to design a carpet for the space. Acne next month also plans to open a third store in Oslo, based in a former bank.

“I thought [Scandinavian fashion] was peaking two years ago, but we’re having a moment now,” said Karl-Oskar Olsen, co-founder of the Danish streetwear label Wood Wood, whose sales have grown 200 percent compared with last year. The label, which has returned to prints as its signature for women’s wear, has opened its market to smaller cities, he said.

Sigrid Thomassen, founder of Norway’s Fabel, said buyers didn’t blink at new prices for her modernized line, which she’d raised by 20 percent. A Liberty-lined cotton trench was among the bestsellers.

Several brands, including Acne, said they were consolidating collections into one main line. “We’re really focusing on making one collection, where each category speaks the same language,” said Ursula Ilmes, international sales manager for Finland’s Marimekko. Later this month, the brand plans to open a showroom in New York, followed by a shop-in-shop in Crate & Barrel in New York’s SoHo, as well as new stores in Malmö, Sweden, and Berlin this fall.

A number of men’s wear brands revealed plans to introduce women’s lines. Pendleton, for instance, is readying to launch Portland, a new brand that will house edgy heritage-inspired men’s and women’s lines. Magnus Carstensen, president of Pendleton Europe, said the first collection will launch at the Pitti Uomo show in Florence in January.

J.Lindeberg, which has restructured since its acquisition in 2007 by Swedish private equity fund Proventus and Swedish financier Stefan Engström, plans to relaunch women’s wear for fall 2011. For spring, the brand, which this year has seen sales rise by 46 percent, according to Tobias Sachs, the brand’s global sales director, introduced a number of premium garments produced by a factory based in Komatsu, Japan, using Japanese fabrics.

Danish heritage brand Norse Projects also plans to introduce women’s clothing soon, while Happy Socks has expanded its collection to include separate men’s and women’s lines. A spokesman for the brand hinted a collaboration with a major designer was in the pipeline. Peter Jensen, meanwhile, said he has signed a two-year contract for a collection for Urban Outfitters in the U.S., due to enter stores in October with drops every two months.