By Design: Trussardi at 100

The Italian luxury brand aims for heritage with an edge. 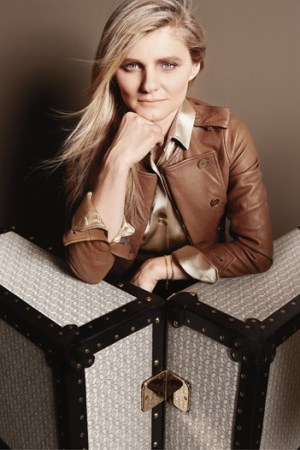 It’s hard to imagine a better match at this moment than Trussardi and Pitti Immagine Uomo. The trade fair needs to strike a balance, maintaining a modern edge while respecting its classical Italian roots. As Pitti’s guest designer brand, unveiling its fall men’s collection on a Florence runway on January 12, Trussardi delivers on both counts: heritage and high fashion.

And it does so in a big year for the Italian luxury brand. Founded by Dante Trussardi in 1911 as a glove manufacturer just outside Milan, Trussardi is celebrating its centennial in a growth mode. It now spans a multitude of product categories—from food to fashion—with some 440 sales points worldwide. In 2010, it opened 16 stores, including a Trussardi 1911 boutique in Porto Cervo, Italy, as well as six Tru Trussardi stores and nine TJ Trussardi Jeans stores in countries from Poland to China.

Directing this expansion is 39-year-old Beatrice Trussardi, who took the helm in 2003 after her younger brother, Francesco, was killed in a car accident—only four years after the equally sudden death of their father, Nicola, also a car accident victim. Since then, Beatrice has streamlined the company while managing a strong fashion push—and a balancing act not unlike Pitti’s.

“It is my name, my family,” Trussardi says in her sprawling office in the brand’s Milan headquarters. “Trussardi is deeply rooted in tradition….But we are always trying to translate these values into modern projects and contemporary products.”

Enter Milan Vukmirovic. In 2007, when Trussardi brought Vukmirovic on board as creative director, it became his job not only to relaunch the Trussardi 1911 collection but also to unify Trussardi as a lifestyle brand.

The dual assignment seems undaunting for Vukmirovic, a tireless multitasker whose high profile extends to media (he’s editor in chief of L’Officiel Hommes), retail (he co-founded The Webster boutique in Miami Beach in 2009) and photography (he has shot ad campaigns for Giorgio Armani and Hugo Boss). It may sound as though he’s spreading himself thin, but Vukmirovic claims his hectic lifestyle is essential to his creative process. “To go away and take some pictures, work on the magazine—it helps me keep a fresh and critical eye on what I do here,” he says.

The designer calls himself a longtime admirer of Trussardi. “When I was younger, I remember the beautiful Testino campaigns,” he says as he waits for a cappuccino in the airy Café Trussardi. Later, in the Nineties, when Vukmirovic was buying the brand’s leather pieces for Colette—the celebrated Paris boutique he co-founded—Nicola Trussardi approached him about joining the company. But it wasn’t the right moment, Vukmirovic says.

After that, he designed for Gucci, under Tom Ford, before becoming creative director of Jil Sander—a thankless task at a time when the fashion flock desperately missed the brand’s namesake designer. Then, a few years after leaving Jil Sander, the right moment arrived: He joined Trussardi and found it an ideal fit. “I am the new client of the luxury business,” Vukmirovic says. “The world is a lot smaller for us now, so we always need something exciting and new, and this is what I am trying to bring to Trussardi.”

He adds, “I think Beatrice really liked this side of me, because I try to make things not only about luxury, but about lifestyle.”

To that end, the two collaborated on an ambitious redesign of the Milan headquarters. The result is a “concept space” where visitors can shop in the boutique, dine in a two-Michelin-star restaurant, stop for coffee or just gaze at some of the city’s most important cultural monuments looming on the other side of the floor-to-ceiling windows.

The company naturally views the centennial as an opportunity to reflect on its rich history. Trussardi remained a leader of the European glove market for about 50 years. Dante’s grandson Nicola took over in the late Sixties, just as the market for luxurious gloves began to wane, so he expanded the company’s offerings to other products, such as leather bags and jackets.

Beatrice describes her father as an innovator. In the Eighties, when he launched the men’s and women’s apparel collections, he held fashion shows in public venues such as Piazza Duomo and the Sforzesco Castle in Milan, so anyone could watch. He also designed costumes for a performance of Verdi’s Macbeth at the Verona Arena. “The idea was to couple these fashion shows with a cultural ingredient—theater, art, architecture—to send a message that fashion was a cultural discipline, not just a business,” she explains.

But the anniversary also serves as a springboard to the future. Centennial projects include a revamp of Trussardi’s online store, a line of limited edition anniversary products, a new monogram designed by Vukmirovic, two fragrance launches and a book.

Meanwhile, the brand hopes to widen its presence in the U.S., where Trussardi is sold in just a handful of stores, such as Barneys New York, Jeffrey and The Webster. Clearly, there’s ample room for growth. “It is an iconic Italian brand, and the creative direction that Milan [Vukmirovic] gave the men’s wear is exciting and new,” says Jeffrey founder Jeffrey Kalinsky.

In 2011, the brand plans to open a Trussardi 1911 boutique in Rome and possibly a first U.S. store. Meanwhile, the global expansion will continue. “The goal,” says Beatrice, “is to be everywhere.”