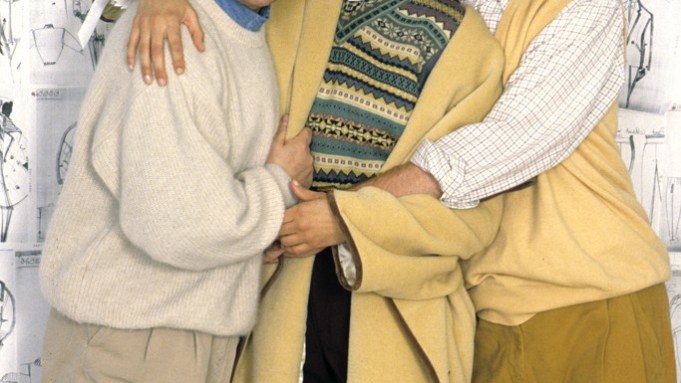 MILAN — Keith Varty, who made Byblos a fashion-forward brand in the Eighties and put it on the map internationally, died in Italy on Thursday night from complications of cancer. He was 60 years old and had been ill for about a year.

Varty is survived by his longtime partner, Alan Cleaver, the other half of the designing duo at the helm of Byblos. The funeral will be held today in Sirolo, in Italy’s Marche region, where the designers lived.

“Keith was the most amazing person, and over the last few days everyone who worked with us at Byblos came to Ancona and told us those years at Byblos were the best of their lives,” Cleaver said Monday. “We were like a big family. Donatella Girombelli cut her holiday in the Caribbean short to come back here….We started a new look at Byblos. We introduced cotton and prints and color in place of all the crepe de chine. We stirred things up, and I think we really made an impact. We made it sporty and casual.”

Entrepreneur Sergio Girombelli remembered meeting Varty and Cleaver in 1980. Together with his sister-in-law, Donatella, he tapped the designers, fresh out of London’s Royal College of Art, for the Byblos line, which he and his brother Arnaldo had launched in 1973. Varty and Cleaver followed none other than a young Gianni Versace, who had gone on to head the Genny and Complice labels, also controlled by the Girombelli group.

“They were the first of the English talents to go abroad and make something wonderful happen,” Joan Burstein, the owner of Browns in London said from Ancona, where she was attending Varty’s wake. “Now, so many English designers work abroad, but we’re talking about the Sixties and Seventies and they were just outstanding. One collection they did was all white, there was always a story, always a theme they offered you. And their knits were sensational.”

Sergio Girombelli credited the duo for building and defining Byblos. Remarking on Varty’s “enthusiasm and talent,” Girombelli said he combined his “English style with the Made in Italy tradition, interpreting fashion in a young and colorful way.”

The entrepreneur said Varty spun countless themes, such as travels through Russia, for example, making them always “contemporary.” Among the designers’ hits, he mentioned “the washed silk suits, or his lace collections mixed with fun details, such as ruches.”

In the mid-Eighties, Varty experimented for Byblos with his first men’s collection ever and then expanded the brand with accessories, eyewear and perfumes. “He interpreted the Eighties and made the Byblos brand palatable around the world, including the U.S.,” said Girombelli, underscoring a strong relationship with Saks Fifth Avenue. “Perhaps our only competitor at the time was Kenzo,” he added.

Varty, the more outspoken of the design duo, wasn’t afraid to express his mind, or follow his instincts. “Last year I was feeling very strongly about one of those pieces with the Scottie dogs and the snowflakes. They all laughed at me for putting it on the runway. Alan thought it was stupid. And then it went ahead and sold so well,” Varty told WWD in June 1985.

“I’m really grieving, and all the memories come flooding back,” said Donatella Girombelli, who used to meet Varty from time to time, as he “loved the Conero,” near Ancona, where Girombelli also has a house. “He was very reserved, but very joyful, he loved to laugh and his playful and colorful fashion reflected this attitude. Those were beautiful years and coincided with Byblos’ golden moment.”

Varty’s sense of style worked with the brand, which was conceived as a younger line. “He was very creative and innovative, dared to put flowers on men’s wear, but with class,” she said. “He was incredibly sweet and gentle, and amiable, as was his fashion.”

Tom Ford told WWD he met Varty in 1987 through his partner Richard Buckley, who had been friends with the designers for years. “We often vacationed with them in Italy,” Ford recalled. “We always had a wonderful time with Keith and Alan and spent most evenings [and days] laughing until our sides hurt. Keith was a kind man with a great talent and unstoppable work ethic. He was a generous and loyal friend and I feel very lucky to have known him.”

Sergio Girombelli left the Genny group in 1992, in disaccord with Donatella Girombelli, and Varty and Cleaver also exited the company the following year, succeeded by Richard Tyler. Varty seemed to be always aware of fashion’s transitory nature, telling WWD in April 1987: “Someone said to me once, ‘Today’s peacocks are tomorrow’s feather duster.’”

Their relationship with Sergio Girombelli did not fizzle, though. He said the designers had “one of the most beautiful villas on the Conero,” in the Marche region, where the Genny group was based, and turned to interior design. “We had a rare partnership. Those were the most beautiful years, and we always kept in touch,” said Girombelli.