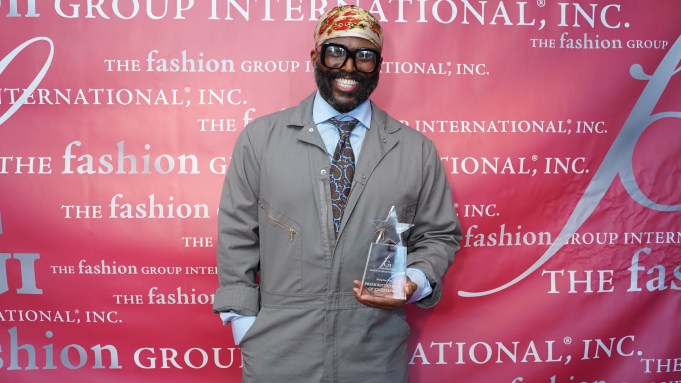 Three decades into his career as an independent designer, Byron Lars is being honored twice this spring.

Pratt Institute will honor Lars with a honorary degree at its 113rd Commencement on May 18. And Tracy Reese will present Lars with the Fashion Group International’s President’s Award for Excellence on May 10 at the organization’s Rising Star Awards luncheon.

Revealing its lineup Tuesday, Pratt has tapped architect Toshiko Mori to deliver the commencement address and the American Museum of Natural History’s director of astro-visualization Carter Burwell Emmart will receive an honorary degree.

Last year Lars rebranded under the name In Earnest and the sentiment applies to his approach to fashion. As for the recent attention, he said, “It’s gratifying to be recognized for continuing to do relevant work. We really do strive to keep things here, not just what we see, but what she needs — she being our customer.”

Not interested in “just checking boxes for her and moving onto the next thing,” Lars aims to strike a balance between the items that customers know the brand for and surprises that she might not be ready for this season, but possibly the next. “We want to keep it evolving in an organic way instead of a revolutionary arc,” Lars said.

Given the ongoing turmoil globally, the designer was hard-pressed to single out the greatest challenge. “It would be more difficult to answer what isn’t challenging right now — everything from the supply chain to what world we’ll be designing for six to eight months after we’re creating clothes. But it’s also been super educational in trying to strike that balance with things that can really work at home on a Zoom call and out in the real world,” Lars said.

The speed of the pandemic-induced shutdown happened so swiftly that many resorted to pajamas or a pajama sensibility “overnight,” the designer said. Once there were indicators of waning positive cases and a reemergence, “it seems there might have been some over correction in some cases with hard tailoring and full-on evening [wear],” Lars said. “Is it really happening in the real world? I would have to say to a degree yes and no. One of our fanciest, most expensive dresses sold very well last holiday season. There weren’t a lot of parties, at least in-real-life parties going on. We got tagged with a couple of videos of people just wearing the dress twirling around at home, looking great.”

The dress retailed for holiday at less than $1,000 but the price has since “creeped up well beyond that” due to inflation, he said. “At the time, we asked, ‘How much should an evening gown be without anyone going to any evening events?’ We felt it out and it did really well — and so did the really casual things.”

Acknowledging how a return to parties subsequently has started to happen to a greater degree, Lars noted how other things are happening too, like the latest mutation of Omicron. “I guess this is just the new world that we’re navigating and we just have to learn to be in it,” he said.

With functionality always at the center of his designs, Lars has incorporated discrete elasticized waistbands and other features for maximum range of motion. So much so that at a glance, shoppers might mistakenly presume they couldn’t wear such designs. The designer’s response to these types of scenarios is one of confidence, advising consumers: “‘No, just put it on.’ We do all the heavy lifting. With the pandemic, the imperative need for comfort was just magnified in the whole design process,” Lars said.

The ability to make people feel good in a design beyond having others tell them they look great is essential. “You feel that you look great because you feel comfortable. You can focus on other things than pulling that skirt down or pulling that bustier up,” he said.

Need isn’t the only driving factor in purchases — an emotional component can never be ruled out despite all that is happening, Lars said.

The way he sees it longevity comes down to listening to the audience that you are playing to. That means being very receptive to shoppers’ input in co-creating the brand, Lars said.

Reached in his Fifth Avenue studio in Harlem, Lars said: “We work so much that we haven’t really been able to engage with the community in a way that I would like to to become a part of the Harlem creative conversation. I would love to really get involved with that community of creatives here.”