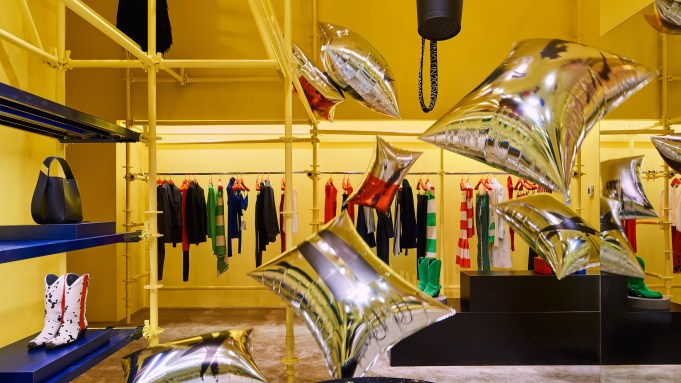 The latest iteration of Calvin Klein Inc.’s multiyear partnership with The Andy Warhol Foundation for the Visual Arts Inc. was unveiled Tuesday at the brand’s flagship at 654 Madison Avenue here. Warhol’s “Silver Clouds” has been reimagined in an installation that is open to the public to view and interact with through Feb. 28.

Warhol’s original artwork featured 15 gleaming, pillowlike balloons, floating through the interior of his 47th Street clubhouse, which was named Silver Factory. “Silver Clouds” was a rare and iconoclastic piece of its time, blurring traditional boundaries of the relationship between artwork and viewer, and was installed in 1966 at New York’s Leo Castelli Gallery.

Re-created this year by Calvin Klein in the same ratio as Warhol’s work, hundreds of untethered, chromelike “clouds” are filled with a mix of ambient air and helium. The pieces hover and float freely in midair until they are impacted by the presence and movement of visitors. The balloons bob throughout the three-level store, some rising to the ceiling and others gathered on the floor and in front of the clothing.

“I’ve been like the balloon monitor,” said a Calvin Klein salesman, who was discussing the fun atmosphere with a visitor. He said to feel free to move them out of the way if one wanted to see something on the rack.

The oversized balloons are printed with images evident in the spring Calvin Klein 205W39NYC runway collection: the twisted metal wreckage of Warhol’s “Death and Disaster” series and portraits of confidantes Dennis Hopper and Sandra Brant. The macabre prints are in contrast to the dreamily Pop canvases on which they have been printed.

The flagship, which underwent a makeover in July, is expected to have a complete renovation at an unspecified date. Right now, the decor, by Sterling Ruby, is bathed in yellow light with yellow-painted walls.

As reported in November, Calvin Klein Inc.’s financial commitment to the Andy Warhol foundation will support the organization’s endowment, from which it distributes grants sustaining the creation, presentation and documentation of contemporary visual art. In return, Klein was granted unprecedented access to the late artist’s works, including many that have not yet been published. The global partnership is effective through 2020 and extends to licensing projects across various business lines and future activations within the Calvin Klein brand portfolio.

Warhol, who died in 1987, remains one of the most influential figures in contemporary art and culture. “I’ve come to realize that Warhol’s genius goes much deeper than cheerful Campbell’s Soup paintings,” Raf Simons, chief creative officer of Calvin Klein, who is known for his passion for the art world, said in November. “He captured all sides of the American experience, including sometimes its darker sides. Warhol’s art tells more truths about his country than you can find almost anywhere else.”

The first iteration of the partnership was revealed in September at Simon’s spring 2018 Calvin Klein 205W39NYC runway show. That collection featured a selection of Warhol artworks as placement screen prints. It was shipped to stores last month. The collection was inspired by cinema, the dream factor of Hollywood and its depictions of an American nightmare and the all-powerful American dream. The pieces incorporate portraits of Warhol’s friends Brant and Hopper, as well as “Knives” (1981 to 1982), “Electric Chair” (1964 to 1965), and “Ambulance Disaster” (1963 to 1964) from Warhol’s “Death and Disaster” series. The collection also highlights pieces produced in collaboration with Hopper Goods, an accessories and clothing brand inspired by Hopper.