The company threw the event, set in a decommissioned hangar, to fete its new Collection stores in Asia. 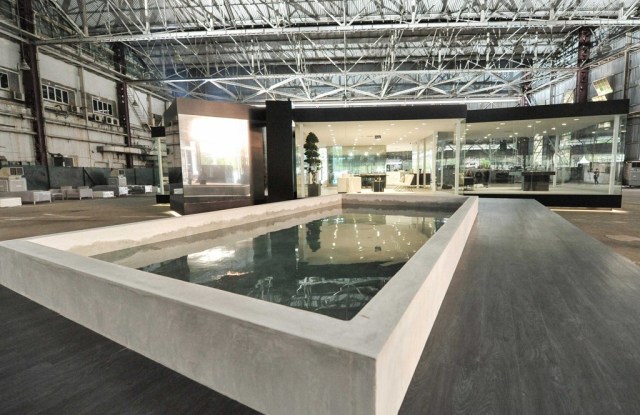 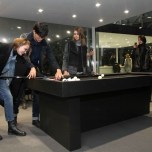 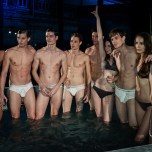 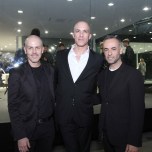 SINGAPORE — Calvin Klein Inc. hosted an event here to fete its new Collection stores in Asia as it aims to capitalize on its growing business in the region.

Set in a decommissioned hangar on the grounds of the former Kallang Airport, CKI had American architect Joshua Prince-Ramus build a concept house within the impressive warehouse structure. Thirty live models lounged and interacted with each other within the glass-encased house as about 1,000 attendees rotated around it, amid the thumping beats of New York City-based DJ collective The Misshapes.

Prince-Ramus said the concept house, which took four weeks of planning, went through five drastically different iterations. The point, he said, was to showcase a modernist house that was befitting of the CK brand, but that was just “slightly disobedient.”

Products from CKI’s home furnishings line filled each of the living spaces. In the living room, a group of models sat chatting on the couch, while in the next room a couple in underwear were silent on a four-poster bed, both tapping away on mobile phones. In another room, one of the female models, clothed only in CK briefs and men’s jeans, held a skateboard over her torso, with only the glass wall separating her from the attendees outside snapping photos. Outside the house, a chiseled male model waded in a shallow concrete pool set on a raised wooden platform.

“We wanted to take modernism and shake it up a little. It’s naughtiness with elegance,” he said.

Murry said it’s still a little early for him to make a forecast on sales in Asia for the year, but he estimates that growth will be in the “high teens to low double digits” range. He said the region is “by far” the fastest-growing contributor to the company’s business.

“Based on the way [sales] are growing, some day China will be the biggest market for us — although I don’t know if that’ll be in five or 10 years’ time,” said Murry, who downplayed the impact of the recent economic slowdown in the country and said the company is focusing on the longer-term potential of the market.

Eventually, China’s explosive growth will skew these numbers slightly in favor of Asia, but the company is growing as a whole, dampening this effect, Murry said, adding that this geographic split has stayed relatively constant over the past decade. “That’s very unusual” for a global brand, he said.

Asked about competition in Asia, Murry said the company is squaring off with fast-fashion giants such as Zara and Hennes & Mauritz. While CKI’s Collection line is clearly positioned in the high end of the fashion segment, the company has more than 250 stores in Asia stocking its more accessibly priced products from the Calvin Klein Underwear, Jeans and Platinum labels.

“Since the advent of social media, men are more interested in fashion, especially Asian men. What is great is that men in Asia love clothes. Tokyo is the most extreme, you see crazy guys wearing crazy clothes. It’s very refreshing to see how men embrace fashion in Asia,” he said.

Still, both Zucchelli and Francisco Costa, Calvin Klein’s creative director of women’s wear, downplayed the differences in consumer tastes. They said they don’t design with certain markets in mind.

“Very honestly, the American taste is not very dissimilar to [that of the] Asian,” Costa said.