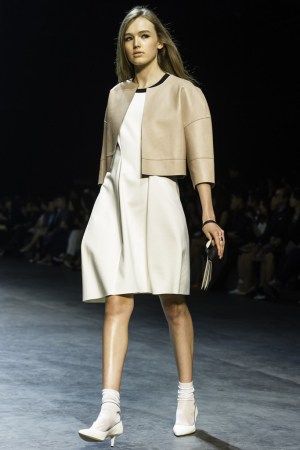 “Calvin Klein’s on fast-forward to reinvigorate, regenerate and bring the brand DNA back to a new audience, in a way that’s warmer, in a way that is more soulful, in a way that connects,” said Carrigan, who celebrated his 15th anniversary at the brand last week. He said he hopes for the line to impart warmth and charm, and to be “more approachable.”

Platinum label’s apparel debut featured billowing slip dresses, asymmetric skirts, structured T-shirts and relaxed pants that combined pure fabrics in multiple shades of the label’s signature platinum for spring. Soft pleats, low heels and reverse-twill pants, as well as dropped-sleeved, exposed-edge and textured T-shirts, were in abundance. There were elements of the brand’s signature athleticism, expressed through racer-back tank tops and dresses. The label uses few blended fabrics, focusing on fabrics such as 100 percent wool and cashmere against pure nylons and acetates, which provide a more technical and futuristic element.

Staying true to the brand’s palette, the new bridge label uses a rich variety of grays liberally, and this was most obvious backstage before the show, where a crowd of models were seen in metallic, platinum, graphite, chalk, off-white, heather gray and sheer black pieces. The sea of gray was broken up by punches of color in viridian green, cobalt blue and icy pink. Once the lights dimmed and these pieces were paraded onto the runway, the hues played dramatically against a massive, jutting structure, measuring 150 by 20 feet and covered in crisp, metallic Mylar, which served as the show’s background.

The newly revamped bridge line, which is distributed mainly in Asia and Europe, was introduced this fall with the launch of platinum label jewelry and watches.

The label occupies the segment between the premium Calvin Klein Collection and the accessible white label. Carrigan said he aimed for the platinum label to be “believable” in the bridge area, unlike the bridge lines that have flooded the market in the past eight years, which he considers subbrands. “People do not want a diluted label,” he said. “They want the real label.”