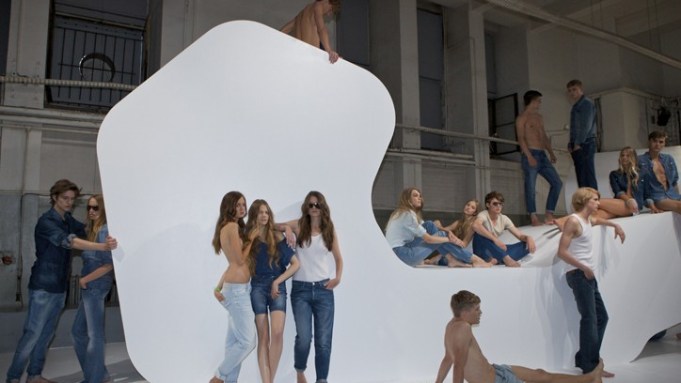 That could have well served as the motto for Calvin Klein, as the American brand pulled out all the stops with a seven-figure World of Calvin Klein presentation during Berlin Fashion Week — its largest ever in Europe. The maxim also applied to the viewing screens set up in the venue’s back courtyard, an acknowledged necessity when the long-planned event suddenly ran up against the World Cup semifinal match between Germany and Spain the night of July 7 (Germany lost).

The former German mint, or Die Muenze, a disused landmark whose stately exterior hides a peeling, abandoned interior, was taken over for a graphic installation of the Calvin Klein brand portfolio among huge organic constructions by Berlin architect J. MAYER H. On show were selections from the women’s resort Collection, a gently tinted lineup appearing on hangers on long Lucite rods.

“I had seen pictures of the building before,” Costa remarked, “but when I walked in and saw the peeling walls, it was really emotional. It felt like the [resort] collection inspiration, and it felt so perfect.”

For men’s Collection, there was a slightly skewed still-life presentation of straight-off-the-Milan-runway looks for spring. There was also a preview of the fragrance Calvin Klein Beauty. And in a variety of tableaux vivants, 70 models stood, lounged and played and danced on the curved, wavelike installations clad in looks from the spring 2011 ck Calvin Klein, Calvin Klein Jeans and Calvin Klein Underwear brands. When they were clad, that is. Two male models in the buff lay on their stomachs amid some underwear-clad peers — a sight that hardly raised an eyebrow in this city, where people in the park start stripping when temperatures go above 60.

As for Calvin Klein Inc., the goal these days is to actively build its European business, especially in Germany, which, as Murry pointed out, is the number-one economy in Europe and number four in the world. “We’re underpenetrated in this market,” he said, which is one reason the firm felt it worthwhile to spend about $1 million on its big night in Berlin.

“We believe that a large-scale event of this type will be instrumental in raising the awareness and image of the Calvin Klein brand and help provide a platform for commercial growth,” he said. For 2010, Murry is projecting a 20 percent sales gain in Germany. Led by the Calvin Klein fragrance franchise, followed by underwear and then jeans, Calvin Klein generated $129 million in retail sales in Germany in 2009, with sales this year expected to hit $162 million.

Murry sees further opportunity for growth here with the ck bridge business, which is relatively new in Europe, he pointed out, whereas the Collection business is “almost nonexistent. We’re starting in Quartier 206 Departmentstore for spring,” he revealed, and Theresa in Munich, which has sold Collection on its Web site, is interested in carrying it in-store.

The strategy is to grow all three tiers: Collection, bridge and white label, Murry said. And from a retail standpoint, given Germany’s uncertain department store structure, to grow via freestanding stores for Calvin Klein jeans, underwear, ck and eventually, Collection. “Though on the Collection side, there’s still lots of potential here in multibrand stores,” Murry added.

At present, the brand’s top European market is Italy, followed by Spain, the U.K., Germany and then France. On a global level, the brand’s sales of about $6 billion are divided between the U.S., with about $3 billion; $2 billion in Europe and the Middle East, and about $1 billion in Asia. “And what’s interesting is that based on figures and the business plan, this [breakdown] will remain essentially constant through 2012. We are growing rapidly in Asia and China, but also in Europe, the U.S. and the Middle East,” Murry said.

As for the soccer-dominated timing of the World of Calvin Klein Berlin event, any worries the crowd would stay away proved unfounded. And Carrigan, for one, thought the overlap with the semifinals was perfect.

“There’s a certain energy in the air, and it’s a onetime thing. It’s about seizing the moment, taking the energy and moving forward — and that’s so Calvin,” he said.