The Brazilian design duo Fernando and Humberto Campana discuss their many projects, including the current exhibition of furniture pieces at Les Arts Décoratifs. 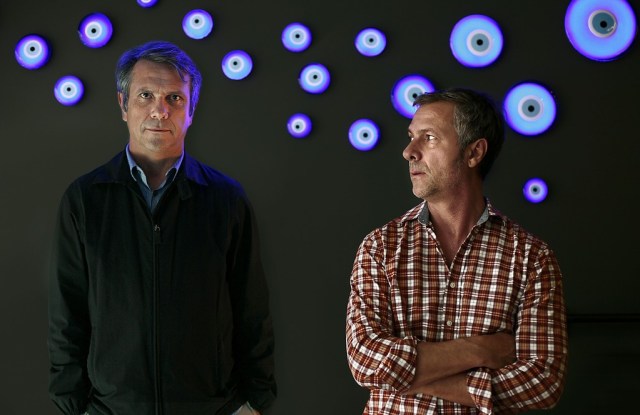 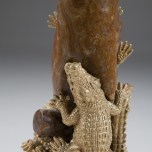 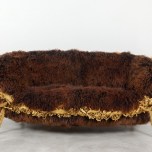 Paris can’t seem to get enough of the Campana brothers. Through Feb. 24, Les Arts Décoratifs is hosting “The Campana Brothers, Barroco Rococó,” an exhibition of furniture pieces the Brazilian design duo of Fernando and Humberto Campana originally produced for the Galleria O in Rome last year. Famed for their collaborations with Italian manufacturer Edra on chairs made from recycled industrial materials, the pair have changed tack with these ornate pieces made from materials such as marble and bronze, using traditional Italian handcrafting techniques.

The pieces are shown alongside some other recent projects, such as a polo shirt created for Lacoste from thousands of hand-stitched crocodile logos.

Chosen as one of three designers of the year by the Maison & Objet trade show, the Campana brothers have cemented their status as critical darlings by designing a temporary suite for the Hôtel Lutetia on the Left Bank. WWD sat down with them to discuss their many projects.

WWD: You seem to be having a love affair with France.
Fernando Campana: Yes, it’s fair to say France is really spoiling us! But I think there has always been this love affair between France and Brazil. In the last few years, France has accounted for 70 percent to 80 percent of our work, between the café we created for the Musée d’Orsay, our suite at the Hôtel Lutetia, our collaborations with Lacoste and Bernardaud, the summer design workshops we run in Boisbuchet, and the “Garrafa” exhibition we staged with the National School of Architecture of Versailles. France is curious about other cultures and about integrating them in a positive way using its know-how.

WWD: In the pieces on show at the “Barroco Rococó” exhibit at Les Arts Décoratifs, you use bronze elements that range from crocodiles to elements of urban waste, like disposable razors and tubes of toothpaste. How did this idea come about?
Humberto Campana: I think this work is more narrative [than what we have done previously]. Mixing crocodiles with toothpaste tubes is an idea that originated from these moments when, for example, in the middle of the Amazon rain forest, I would see a plastic bottle floating on the river. That just offends my eyes. I wanted to create a snapshot of my rejection, as a protest against the lack of respect for the environment.
F.C.: Each piece of furniture is like a little cabinet of curiosities. We assembled disparate elements in a kind of contemporary archaeology.
H.C.: We recycled ornaments and elements of decorative arts from the 1600s to the 1800s, but without any semblance of historical rigor, like a patchwork.

WWD: Previously, you have used “poor” materials, like cardboard, rope or carpet scraps to create products that are ultimately elitist, since they are destined for a very small and sophisticated audience of design aficionados. These pieces come across as more openly elitist, because of the materials used.
H.C.: For me, it was more about my passion for manual labor and for techniques that are on the verge of disappearing. This is something I’m very interested in right now, you know, learning these traditions that in many cases don’t exist in Brazil. We have crafts, but nothing sophisticated, like casting bronze or sculpting marble.

It’s my mission to reinterpret and preserve technical skills that are in danger of disappearing by approaching them with a fresh eye.

WWD: But is it fair to say this is a time of transition for you?
H.C.: I do think it’s a time of transition. When we start to see our work slipping into the mainstream, we like to head off in a different direction, even if we end up getting lost.
F.C.: Often, we will pull back, regroup and wait until a new idea pops up. I think it’s important to know when to step back in order to better move forward.

WWD: As part of your exhibit at Les Arts Décoratifs, you have designed a collection of jewelry on sale at the 107 Rivoli design store. Was this your first foray into jewelry?
H.C.: No, we actually did a collection for H.Stern, in Brazil, back in 2001.
F.C.: We like to break the boundaries between art and fashion, fashion and jewelry, jewelry and design, design and architecture. Our ambition is to incorporate these various disciplines by focusing on their manual aspects, or trying to take advantage of the best each has to offer in our production processes.

WWD: I would have expected you to be antifashion, since its constant cycle of renewal is not very environmentally friendly, but I hear you are collaborating with Lacoste for the second time on a capsule collection of polo shirts?
H.C.: Part of this collection is going to be produced by a nongovernmental organization in São Paulo called Orientavida, which works with prisoners’ spouses.
F.C.: It’s going to be a limited edition. For that reason, already, it won’t be very polluting. We’re on our way to Beijing for the launch of the line.

WWD: What about retail stores?
F.C.: We are working on a new store for [Spanish shoe company] Camper, in São Paulo, with a decor using coconut fiber, the same material featured on the wall of this exhibition, in addition to woven straw. We have already designed stores for Camper in London, Berlin, Barcelona, New York and Zaragoza [in Spain].

WWD: How is designing a store different from your other work?
H.C.: The work is on a bigger scale, so it requires more thought, because if you don’t like an object, you can just throw it in the trash. A house, a store, is something more permanent that will have an impact on its environment, so you need to be more considerate. I think you need to do a lot of them in order to learn, the same way we did with the chairs. You learn by doing.

WWD: What is your most Brazilian characteristic?
H.C.: I think it’s our capacity for changing and adapting rapidly to situations. My whole life, I have lived through one crisis after another. So that gives you a lot of flexibility to get on with things without complaining. That adaptability is a very Brazilian trait, I think, whether you are working class or upper class.

WWD: How do you divide the work between you?
F.C.: I work on the projects, and he executes them. [Humberto] has spent more time with the pieces than I have, because he was in Rome [working on them with local craftsmen.] I also do collages, for instance those featured on the ceramic plates we produced with Bernardaud. They are collages of our furniture pieces designed to look like tropical images, or jungle leaves, or food, or Brazilian historical scenes.

WWD: Fernando, I read that your dream is to build an airplane?
F.C.: I would like to make one out of glass, with a transparent section. I love to fly, and it would give you the sensation of flying on your own, without the aid of mechanics.

WWD: Humberto, do you still dream of creating a garden?
H.C.: I have already started work on it, in Brotas, the town in São Paulo state where I was born. We also did a vertical garden on the facade [of design store Firma Casa in São Paulo.] I’m really interested in green art.

WWD: What other projects are you working on at the moment?
F.C.: We are finishing a private residence in São Paulo and the interior of the Stedelijk Museum in Hertogenbosch in the Netherlands.

WWD: Are there any hit pieces from the past that you are sick of looking at?
H.C.: I feel passionate about the things that made us successful, because they helped take me to the next level and opened doors. I always feel very sentimental about them. I live with the pieces. My house is full of prototypes — it’s a laboratory, the continuation of my studio. I enjoy using them. If I didn’t, it would be cynical. We would just be creating these radical objects, and then what? I think you have to test them, to live with them.