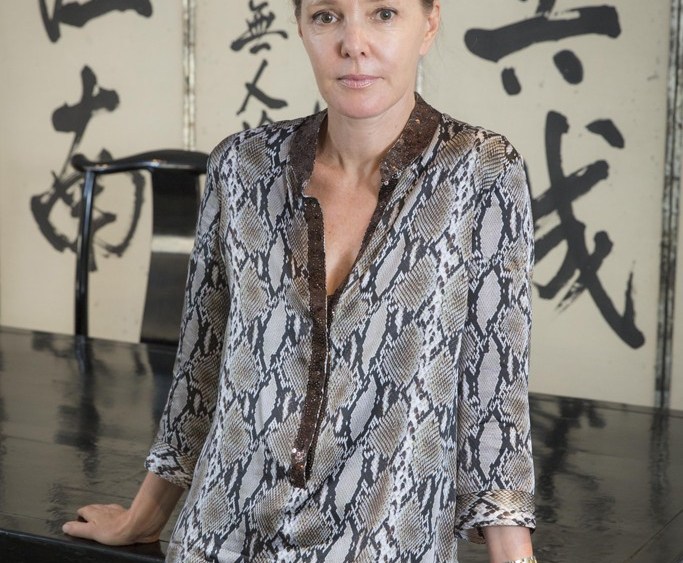 HONG KONG — In a city better known for its appetite for buying fashion rather than producing it, Marie France Van Damme is something of a rarity here.

Originally from Montreal, Canada, Van Damme has lived and worked in Hong Kong for 30 years. After decades running a manufacturing company in China that designed and made women’s wear for western brands such as La Redoute-Redcats, Marks & Spencer and Saks Fifth Avenue, Van Damme started shifting her attention to the high-end market a few years ago. In the summer of 2011, she launched her namesake brand of luxury resort wear featuring caftans and day-to-evening dresses retailing in the $500 to $600 range.

Happily for her, her vision has resonated with buyers. Today her line is carried in more than 12 major department stores, including Bergdorf Goodman, Saks Fifth Avenue, Harrods and Selfridges, as well as specialty stores and resorts in more than 30 countries, she said, declining to give sales figures. Next month she will open her first standalone store, a 600-square-foot boutique that will be located next to Lane Crawford in Hong Kong’s IFC mall in Central. There, she’ll carry her resort collection as well as an assortment of basics such as tank tops and white shirts.

Van Damme said she wanted to work with luxurious, expensive materials such as silk chiffon and hand-sewn glass and crystal beading to escape from the constant price pressure that’s the reality of working in the mass market.

“Working with high street retailers, you can’t go over a certain price point. I always wanted to work with beautiful fabrics. So here I decided that I would use the most expensive, the most beautiful trims in the world. This was almost more about creating a collection just to make me happy and I didn’t know if it was going to go any further. I just had a few beautiful samples,” she said, during an interview at her art-filled office and design studio in Kwun Tong.

Though Van Damme accomplished a great deal with her luxury line in a short amount of time, it’s not been without challenges. As a high-end designer in Hong Kong, Van Damme has had to overcome some prejudice about the “made in China” label. Some buyers balked at the fact that her products are made in China.

“I was surprised that people didn’t think that we can make beautiful things,” she said.
Van Damme sees plenty of advantages to being based in Hong Kong. For one, she can stay close to production. Her staff in Hong Kong go back and forth to China every three days or so. She can see samples the same day and make changes immediately, she said. She has a small factory in neighboring Shenzhen, China where her high-end pieces are made by hand, including embroidery.

Being close to her production facilities in China, she can keep a close eye on things and maintain quality control. She showed several pieces from her newest collection of caftans and day to evening dresses, pointing out how the patterns in the material line up, careful stitching, the time-consuming hand embroidery and other details.

Van Damme’s journey from mass-market producer to the high-end luxury market highlights the challenges that many Chinese manufacturers face today. While many would like to move up to the high end of the market, few have been able to do so.

With labor and other production prices rising in China, Chinese factories have been losing business to cheaper factories in Cambodia and Bangladesh for about a decade. Van Damme continues to do some mass market manufacturing for retailers such as Monoprix and Saks.

She and a business partner maintain a factory in Dongguan, China that employs 1,000 workers. But that’s down considerably from the peak when she had 1,500 workers. The business has gotten more difficult and “mean” over time, she described.

Van Damme’s resort wear collection stands out not only for its use of luxurious fabrics and trims, but its muted color palate of neutrals and metallics.

“When I look for bathing suits or caftans all I could see were really sexy things you would see on posters and that’s really not who I am. Also, I’m a black and white person and to me, resort is always colorful. And I though, why would I war those colors if I don’t like them?” As her line started to gain momentum, she realized “there is a market for resort wear that isn’t your conventional sexy or colorful,” she said.

For now, Van Damme is busy working toward her Hong Kong store, for which she worked with interior designer Deborah Oppenheimer. She hopes that having a standalone store helps show prospective buyers the show off the brand’s concept and lifestyle. Next up, she’s eyeing the U.S. Her label opened a pop up store in Los Angeles in November of last year and she is actively exploring the market.

“The Americans seem to really like what we do. If I could have a second store, it would be there,” she said, adding that she would love to open a store in Beverly Hills.