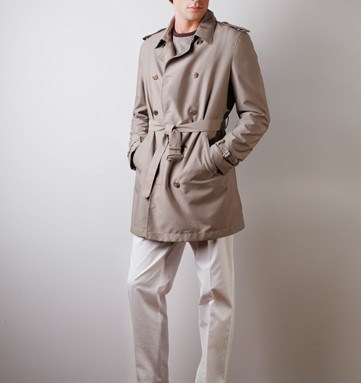 Despite generally favoring American labels, President Obama was pictured wearing one of Italian brand Canali’s suits the day after his election. To have the world’s most powerful man sporting its designs was something of a coup for Canali. It is also fitting, as both are heralding new eras.

While the American commander in chief works on cleaning up health care, international relations and the economy, Canali, which this year celebrates its 75th anniversary, plans a series of initiatives, including its first runway show, the opening of a 15,000-square-foot showroom in Milan and the relocation of its U.S. headquarters. The moves are meant to strengthen its foothold at home and in foreign markets when the economy picks up.

In an interview at the company’s headquarters here, Giorgio, Paolo and Elisabetta Canali, the third generation of the business, explained the family’s vision for the label, which last year saw revenues fall 4 percent to 182 million euros, or $267.8 million at average exchange rates. At constant exchange, revenues were flat.

“Our philosophy has always been step by step; never take too many risks but establish steady growth and maintain the family business,” said Giorgio, president of Canali’s North American operations. “The steps we are making now are part of this evolution.”

His cousins Paolo and Elisabetta serve as commercial director and marketing director and head of image and communications, respectively. Their father, Eugenio Canali, is chief executive officer.

“We are getting into the best shape possible but not changing course,” Paolo said.

“You have to hang tight and maintain your strategy,” Giorgio added. “After 75 years as a business, we have learned that [growth] comes back.”

Turning a crisis into an opportunity is part of the company’s DNA. The business was founded in 1934 by the trio’s grandfather, Giovanni Canali, and great uncle, Giacomo Canali, after the brothers lost their jobs at one of Italy’s leading textile mills during the Great Depression.

On a tour of one of Canali’s seven factories, which produce 1,400 hand-finished canvas suits and some 1,600 trousers daily, Elisabetta showed off the first pieces of the spring 2010 collection, which will bow on the runway during Milan Men’s Fashion Week.

“In moments like these, you have to do more. We had a lot of projects, and we didn’t change our strategy because of the crisis,” she said.

“We are starting a new cycle,” Paolo added. “The catwalk is a new challenge. The collection has evolved a lot and is a full collection — from tailored pieces and sportswear to accessories — which have earned it a place on the catwalk.”

For spring 2010, Canali is channeling the Art Deco period and Italy in the Thirties — think men with broad shoulders in double-breasted silk and linen jackets in subtle grays and sandy tones, and more modern vivid colors such as turquoise, violet and coral with satin-finished or mother-of-pearl buttons. Canali also is lending a soft touch to silk and superfine wool tailored suits in Mediterranean-inspired hues such as ocean blues or beach sand. More leisurely looks include sporty shirtlike jackets.

But the company’s plans extend beyond the runway, with the new showroom and commercial office on Via Lodovico il Moro in a former warehouse district in the southern part of Milan.

The move to a “younger, hipper and trendier” neighborhood underscores Canali’s efforts to inject a youthful boost into the label, particularly in casualwear, which the company hopes to grow to 30 percent of revenues in the near future, up from 20 percent now.

Canali’s sportswear continues to gain market share in Europe and Asia and the company tapped Hugo Boss and Ermenegildo Zegna veteran Simone Eisold to head up the new North American-specific sportswear line, which bowed this spring.

For spring 2010, Canali’s sportswear collection is inspired by golf, sailing, and vintage and classic cars, among other pursuits.

“We are acting more aggressively with the price list and also in terms of the collection, paying a lot of attention to the different price points and making sure we adjust the mix,” Giorgio said.

In efforts to further tap the U.S. market, which represents 35 percent of company sales, Canali is moving its Fifth Avenue headquarters in New York to the Meatpacking District. The company spent $10.6 million to purchase two floors in a building at 415 West 13th Street and will leave its base in Midtown when the lease expires next spring.

Like many brands, Canali has gained recognition through celebrity placements, dressing top athletes and actors including George Clooney in his title role in “Michael Clayton.” But while the Hollywood set and the catwalk certainly stir buzz, the family agrees directly owned retail outposts are the key to the brand’s image.

“It is the best way to communicate with our consumer,” Paolo said. Giorgio added, “It’s about being closer to your clients because in the end it’s about partnership.”

Today, the company — which has opted for a controlled rollout of both directly operated and franchised stores — counts 150 freestanding units worldwide, with five recently opened stores in the United States. A 4,300-square-foot unit will bow on Rue Marbeuf in Paris before yearend, followed by openings in Beirut, India and China.

With no debt, the company remains cautiously optimistic about the future.

“We are looking at a few small signs of recovery — not yet on the selling floor, but the economy is showing that there is expectation for recovery in the stock market a few months down the road,” Giorgio said. “Spring 2010 will definitely be better than spring ’09…and by yearend we hope to see some bounce back.”