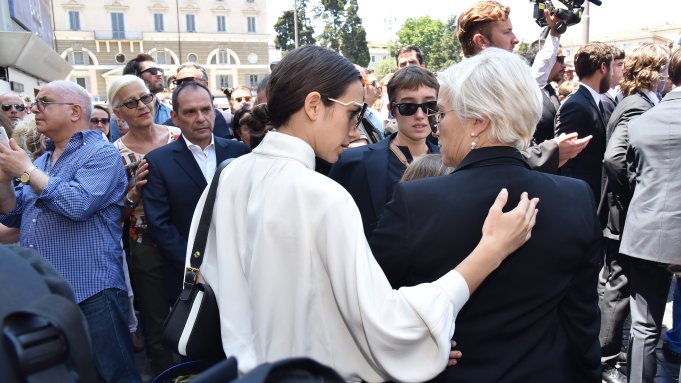 ROME — Delfina Delettrez Fendi, the elder daughter of Silvia Venturini Fendi, entered Rome’s Church of the Artist on Thursday morning carrying an olive twig in her hands. That tiny object, a sign of peace and life in the Christian culture, epitomized the honest, warm simplicity of the funeral service of Carla Fendi, who died at 80 on Monday.

Boys and girls from the National Academy of Santa Cecilia opened the service with a delicate, sweet chorus, which set the tone of the entire funeral. Setting aside any kind of opulence, the Fendi family, present in the church with all its generations, from the sisters of Carla Fendi, Anna, Paola, Franca and Aida, to the youngest great-grandchildren, decided to pay tribute to the late company’s honorary president in a discreet, elegant way which sounded more as a celebration of life than a memorial.

“I decided to not come to the funeral because Carla will always live for me,” wrote Lagerfeld, who in his note also described Fendi as a “strong and resolute woman,” as well as “passionate and intelligent.”

“What can we do without aunt Carla? What can I and her sisters do without her constant presence? And her grandchildren, the youngest generations of our family without her guidance? And what her friends will do? She always took care of them, giving them suggestions and support,” said Venturini Fendi. “It will be hard without her but she is now back with her Candido [Candido Speroni, Carla Fendi’s late husband] and that’s what she wanted. Aunt Carla lived her life in full, she actually enjoyed life, but she was ready to leave this world to go back to her love. She had so many passions — family, love, culture — but most of all she loved music because Candido loved music. And for Carla, loving music was a way to celebrate her love for Candido through the things that he loved. We will miss her but she is with him now. We don’t have to cry over her today, but only remember her.”

In keeping with the cozy mood of the service, instead of a traditional sermon, Father Walter Insero drew a very personal, emotional portrait of Fendi.

“She loved this church, she was always coming here to pray. Her faith was true, stable and honest,” said Insero, who put the focus on the strength that Fendi showed facing the loss of her beloved husband who died in 2013. The couple met when Fendi was 15 in Piancastagnaio, a medieval village close to Siena, where she used to spend several months a year to alleviate the breathing problems which affected her health for her entire life. “Their relationship definitely demonstrated the value of marriage, the fact that it is possible to love and respect each other forever. Death doesn’t break love, doesn’t reduce it.”

Insero also put the focus on Fendi’s generosity and kindness. “She never had prejudice on people. She was definitely combative, but always tolerant and never hostile.”

Fendi chairman and chief executive officer Pietro Beccari also wanted to remember Fendi, putting the accent on her constant involvement in the company founded by her parents Edoardo and Adele Fendi in 1926.

“Carla had an innate attachment to the Fendi company, which was definitely part of her life. She was extremely proud and happy of the international success of the last few years. Her role was honorary, but she was quite operative,” he said. “On May 4, she called me in her new office at Palazzo della Civiltà  (the Roman headquarters of the brand) and she was waiting for me with a white piece of paper and a pencil — those who had to deal with her know that she used to say: ‘Write! Did you write?’ She wanted to make sure you wouldn’t have forgotten. In that occasion, she wanted to discuss about several things. First of all, she wanted to lament the limited coverage of the latest show, second thing she wanted to discuss the setting of the chairs at the Penone exhibition and lastly she was suggesting to immediately present charges against a store in Rome which was selling copies of our products. As you see, her role was not so honorary.”

Beccari also highlighted that Fendi was guided in her life by a “healthy ambition” which enabled her to reach great goals, including the business expansion in the United States in the Seventies.

“‘Nothing is impossible’ is the motto of the company and she really believed in that. When I joined the company in 2013 she told me ‘I highly recommend you to establish a book of flaws. When an event is over, congratulate and thank the team but also put the focus and show them those things which didn’t work or which could have been done in a better way’ — she was ambitious, courageous and she had an incredible work ethic,” said Beccari. “I think her soul will always remain alive in the values and in the culture of our brand.”