The designer touted the sartorial style and personal integrity of the former first lady at an event benefiting the Alzheimer’s Drug Discovery Foundation. 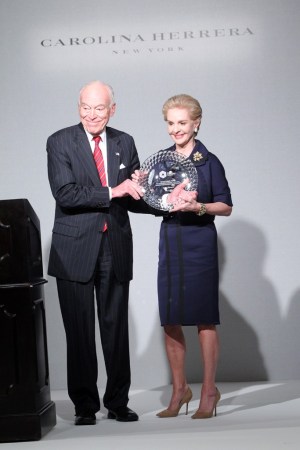 WASHINGTON — Carolina Herrera touted the sartorial style and personal integrity of former first lady Nancy Reagan at an event here benefiting a foundation devoted to finding a cure for a disease Reagan knows all too well.

Herrera accepted the Alzheimer’s Drug Discovery Foundation’s second annual Great Ladies Award on behalf of Reagan, who has fought to raise awareness and increase education and science around Alzheimer’s, a disease that her husband, former President Ronald Reagan, battled for years before he died in 2004.

Leonard A. Lauder, chairman emeritus of the Estée Lauder Cos. Inc. and cochairman of the foundation, along with Washington socialites Elise and Marc Lefkowitz, cohosted the event with Saks Fifth Avenue at the Ritz-Carlton here.

The event featured a fashion show of Herrera’s fall collection and a lunch and silent auction. Saks also hosted an on-site boutique offering pieces of Herrera’s fall line, with 100 percent of the proceeds going to the fund to improve innovative drug research for Alzheimer’s.

“I’m very honored to be receiving the award in her name,” said Herrera, a longtime friend of Reagan’s. “She was a fantastic first lady and a very brave one, too.”

Herrera also credited Reagan for her sense of style, although she said it was Reagan’s strength, personal touches and individuality that compelled people.

“She was very glamorous,” Herrera said of Reagan as first lady. “It’s not only what she was wearing but the way she did things — from the way she received people in her house to the beautiful flower arrangements and wonderful dinners. That is all connected. It’s not only what you are wearing, it’s also the way you handle things. She handled things in a very elegant and glamorous way, which is what the first lady of this country should be.”

As for other powerful Washington women, Herrera offered some fashion advice: “Women in very important positions should not forget about femininity. Just because a woman might be a senator or president of a bank does not mean she has to dress in a mannish way.”

However, Herrera made an exception for Secretary of State Hillary Clinton, who has often been criticized for her ubiquitous pantsuits. Herrera said she read recently that Clinton has made more than 95 trips in the last year and likely wants to be comfortable, adding, “I think it works for her.”

“I lived through Mrs. Reagan’s era,” Frasch said. “She had such an amazing sense of style and was such an influence on women.…I think that is true with Mrs. Obama, too.…They are both superintelligent women who have strong lives, strong personalities and independence.”