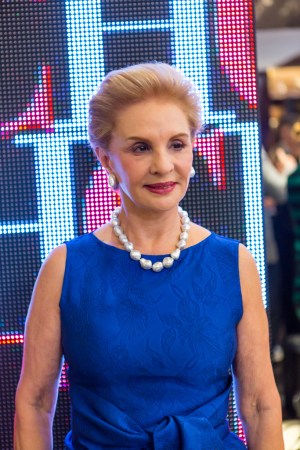 If there were any doubts, she quickly dispelled them at the opening of her new 2,400-square-foot CH Carolina Herrera boutique at CityCenterDC, where a crowd of new and old customers turned out to greet her.

Herrera’s mutual admiration society with the city was topped off with the suggested party hashtag: #CHXODC.

Arriving late, she worked the room in pearls and a navy dress, stopping to shake hands and exchange a few words with everyone, but cutting off conversations that might be too political.

“I think it’s great,” she said tersely when asked about the presidential campaign of Hillary Clinton, quickly moving on to the next handshake.

“Where do we check out?” inquired Kathleen Biden, credit card in hand. Biden is the wife of Hunter Biden, the vice president’s son.

Ten percent of the evening’s proceeds benefited the National Portrait Gallery, which includes a photograph of Herrera by Robert Mapplethorpe.

Kathleen Biden, like so many others at the party, has come to appreciate Herrera’s designs, which resonate with the more traditional aesthetic here. In her clothes, “you look like you know what you’re doing, “said Kristen Lund, a young socialite, who’s been on the Washington scene for a few years. “She’s aspirational.”

Lund was on her way to a black-tie dinner later in the evening, wearing a flirty Oscar de la Renta.

“But I thought she [Herrera] wouldn’t mind, because they were friends,” she added.

Herrera’s new chief executive officer, Francois Kress, said his boss wouldn’t be meeting with the First Lady on this trip because “she’s out of town.”

The new shop, the 21st for CH in the U.S., features luncheon suits, signature red ballgowns, shoes and a wide assortment of accessories, including limited edition tote bags with “Washington” and “1600 Pennsylvania Avenue” motifs, as well as men’s sportswear.

“I think she’s very elegant,” said Pascal Blondeau, a photographer and partner of French Ambassador Gérard Araud, one of many male guests present.

“I used to walk down Madison Avenue, just to look at her windows,” recalled Maria Trabocchi, a local restaurateur. “The fact that she’s finally here says that Washington is moving in the right direction.”