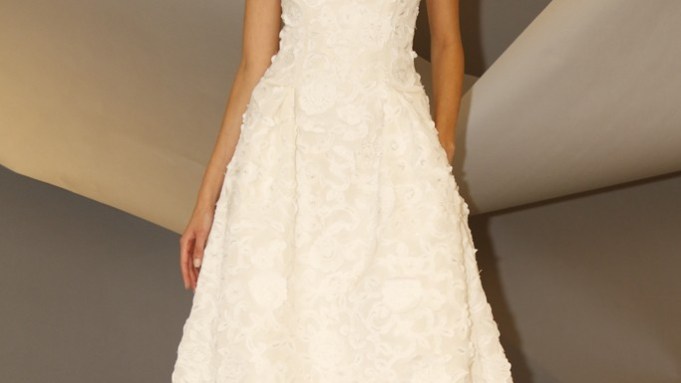 NEW YORK — Without even trying to, Carolina Herrera’s preview of her first collection of short wedding dresses wound up being an occasion, which is essentially the same effect that she hopes brides will have wearing them.

Minutes into a photo shoot, staffers emerged one by one from the atelier and their offices to admire the 12 just-off-the-sewing-machine styles. “They are just out of the oven. They are still hot,” said creative director Hervé Pierre, wafting his arms for effect.

“I am so happy with my short dresses — I love them.” Herrera said. “They can wear them to the wedding, the rehearsal dinner, the party after,” or even the farewell brunch the following day.

Her daughter Patricia mused about which dress she would have worn for her 2002 white-tie wedding in the Cooper-Hewitt National Design Museum’s garden. “I didn’t know that was an option,” she kidded.

The tipping point for Herrera was that she has seen a lot of women who like short dresses so much that they change into one immediately after the ceremony or go so far as to cut their wedding gown for a better dress to dance in at the reception.

“What gave me the idea was I went to a wedding in New York and saw all of the bridesmaids and the bride come out of the church in long dresses and suddenly all of them changed into short dresses in white, and I said, ‘What’s the point — for half an hour of a ceremony and then everyone was in short dresses for the rest of the night?’ I said, ‘You know what? I’m going to go do short,’” Herrera said. She also had the same experience with a wedding party she designed the dresses for but demurred from naming.

“Maybe that’s the new way for girls of today — this length, with a long veil, beautiful flowers and music might be divine,” she said. “I think they want to have fun and show their pretty legs and be happy. They’re young girls — why not?”

An airy tea-length dress with embroidered floral appliqués, a short dress covered with moonstones and delicate straps of pale blue ribbons and a flapper-inspired dress embellished with feathers at the hem are among the offerings. “I am sure I was a chorus girl in another life because when I see feathers I jump on them,” she said.

Unlike some designers who have tried their hand at short dresses, Herrera spared none of her signature details. The tea-length dress, for example, requires 80 hours of work. Traditionalists can rest easy knowing each style can be made as a long gown and modernists will appreciate that each dress has pockets. “Almost all of my clothes have pockets because I hate to have a handbag. I put my lipstick and a handkerchief in my pocket,” she said.