The brand's new Rodeo Drive store emphasizes VIP service as it grows its West Coast presence across all categories. 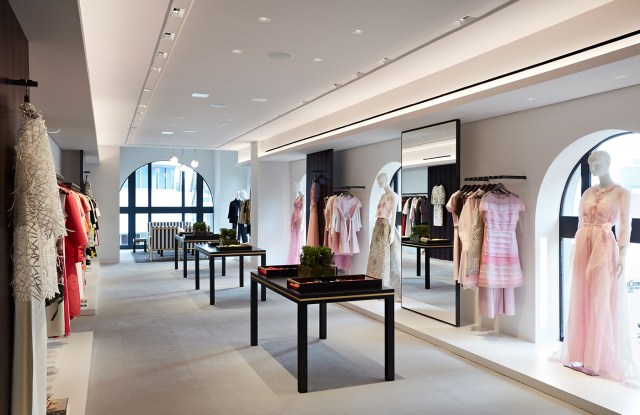 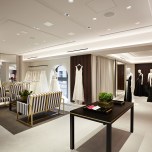 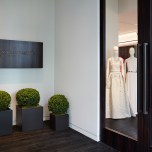 LOS ANGELES — Carolina Herrera this week opened its first ready-to-wear boutique on Rodeo Drive, but the Puig-owned brand has already marked its territory in Beverly Hills with a separate CH store that opened on the famed street in 2013.

Like the CH lifestyle store, the new Carolina Herrera New York space, the brand’s third door, is part of the Via Rodeo complex, with the paved brick walkway and limestone fountain that anchor the southern end of Rodeo Drive at the intersection of Wilshire Boulevard. The two-story, movie set-like complex is home to Tiffany & Co., Jimmy Choo, Judith Leiber, Versace, Stephen Webster and Lanvin, among others.

The 4,000-foot, second-story store, designed by Los Angeles-based architect David Montalba, has a stone facade that echoes a New York townhouse, complete with high arched windows facing the brick courtyard and the Regent Beverly Wilshire hotel (of “Pretty Woman” fame) across Wilshire Boulevard. There’s another entrance at 9515 Wilshire Blvd., with discreet awnings and a lobby elevator that opens directly into the store.

As Carolina Herrera chief executive officer and president François Kress noted: “The trend [on Rodeo Drive] has been toward bigger statement flagships for major players, with specific store concepts and large areas to entertain VIPs. The area has also seen a shift in demographics with increased Chinese tourism with an appetite for accessories. The new store is our response to the current conundrum surrounding luxury retail and will allow us to provide the most luxurious shopping experience.”

The upscale residential feel is in line with Herrera’s New York persona and brand, and the feminine, L-shaped space references her New York spaces with custom-made brass-framed chairs with her signature brown-and-white striped cushions. For a Manhattan-based luxury brand, Herrera has carved quite a niche in Hollywood, forming now-trendy ambassadorships with Oscar perennials such as Renée Zellweger and Amy Adams more than a decade ago. It’s that relationship that the store strives to preserve; hence the private entrance, a space that can be curtained off into a VIP salon with the click of a remote, and heavy linen curtains that can be drawn over large windows in the cavernous dressing rooms.

One story below and a few doors over, the CH store, one of 147 worldwide, provides a more accessible counterpoint, with its street-level entry next door to heavily-trafficked Tiffany & Co., and a full range of young-designer/advanced contemporary-priced “lifestyle” offerings for men and women, from apparel to accessories and shoes. The idea was to bring the Los Angeles doors closer together; Carolina Herrera New York just this month vacated its prime spot on Melrose Place, where it was one of the first luxury fashion tenants almost a decade ago, along with Oscar de la Renta and Marni, which now have newer neighbors such as Isabel Marant, The Row and Chloé.

“For both brands, California is a very important market in terms of sales and image,” said Kress. “It is the second-largest market in the U.S. for Carolina Herrera New York. As far as CH, the brand is relatively new to the area and has been gaining ground consistently since 2013. For both brands, celebrity association is critical and having prime retail locations in Beverly Hills is extremely helpful.”

Also with the goal of utilizing technology to optimize the client experience, the boutique outfits associates with mobile devices integrating POS functionality including client outreach and engagement, inventory management and analytic tools on a single platform. The store also features a video room for two-way conferencing between associates and international clients. To that end, Kress noted that the company is relocating its Harrods London concession store to a larger space as well as opening a CH store domestically in King of Prussia mall in late August.