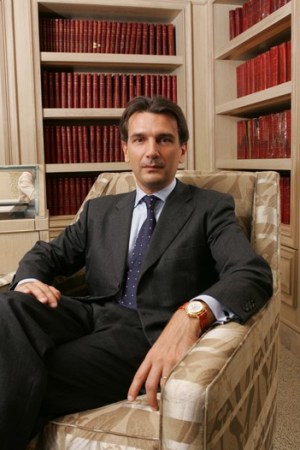 Since taking over in January, Perrin has launched e-commerce, marking the first time American customers of the fine jewelry house have had access at any hour of any day to Cartier products. The firm also launched an advertising campaign featuring its iconic watches, such as the Tank Française and Santos, which were designed in 1904 and 1917, respectively. The campaign, which ran in newspapers, was intended to convey the longevity of styles that remain top sellers.

As Perrin takes the business forward, he is mindful and protective of the heritage and craftsmanship that date to Cartier’s founding in 1847 in Paris and the brand’s 101-year history in the U.S.

“The role [of] any one member of the Cartier organization is a role and also a responsibility,” Perrin said in his office overlooking Fifth Avenue. “Three generations of the Cartier family have passed [this house] onto the next generations in better shape than they inherited it. We can’t compromise the short term for the long term. [We are about] reinforcing the true value of the house and its products.”

Although the Love bracelets are still selling, Tank watches continue to perform and high jewelry keeps wowing consumers, Cartier is in a different position than in 1992, when Perrin started at the company fresh out of college at age 23.

Cartier is bigger, with a retail network of 36 stores; the Internet has started to become a major selling vehicle, and the economic downturn has left customers more demanding of quality and service.

“We’ve seen clients’ expectations and demands [increase],” Perrin said. “It’s much more detailed. There are more questions being asked. The level of service is very important.”

The history that Cartier represents looms large in the expectations of clients.

“Cartier’s heritage of true luxury and iconic designs resonates with the Saks Fifth Avenue customer,” said Cody Kondo, group senior vice president and general merchandise manager at Saks Fifth Avenue. “The brand has a real and authentic story to tell of superb craftsmanship all brought together through a unique shopping experience.”

Perrin, 41, rejoined Cartier this year from Van Cleef & Arpels, where he was president and ceo in North America. Van Cleef, like Cartier, is owned by Geneva-based Compagnie Financière Richemont SA. Before that, he was ceo of Van Cleef’s Japanese division.

Perrin replaced Frédéric de Narp, who was Cartier North America’s ceo from 2005 to 2009, and now has the top job at rival Harry Winston. His father is Alain Dominique Perrin, who began his career at Cartier and is a former ceo of Richemont.

Emmanuel Perrin understands the way a Richemont-owned brand is operated, although the Van Cleef business is far smaller than Cartier and is more focused on limited edition, high-ticket items. Cartier has a wider distribution of products ranging from leather goods, such as a business card holder for $80, to pieces in the millions when it comes to large gemstone jewelry and watches.

The Cartier store network also is broader than Van Cleef’s, which has 13 U.S. units. Upon joining the house, Perrin set out to visit all of the stores, meet with sales and management teams and check out the various locales.

“What’s wonderful in America is the eclecticism of the clientele,” said Perrin, who has left the visit to the Hawaii store for last. “We have a very strong network. We haven’t overextended, yet we are there for our top clients.”

There are no plans to increase or decrease the number of Cartier stores in North America for the foreseeable future. The house recently added a boutique in Las Vegas’ CityCenter retail complex, the Crystals, and is relocating its store at the Forum Shops at Caesars Palace in Las Vegas to a more prime location within the same mall.

Perrin anticipates the Web site, cartier.us, will be one of the firm’s top five producing stores in the U.S. by 2012.

E-commerce signifies “an introduction to a brick-and-mortar store,” Perrin said, adding that Cartier customers lobbied for it. “We’re coming into the game rather late, but we wanted to come into the e-world comfortably.”

The Web site offers accessories and fragrances with retail prices ranging as high as $16,000 for a piece of jewelry or a watch. The broad assortment of Cartier’s iconic Love, Trinity, Santos and Tank collections also is sold on the site, which evokes the hallmarks of a Cartier boutique with its signature red background, and offers multiple views and colors for styles, whether it’s the Marcello bag in tan, white or black or the Pasha watch in stainless steel with a gold bezel. Sales help is available by phone Monday through Friday from 9 a.m. to 10 p.m., and Saturday and Sunday from 9 a.m. to 5 p.m.

Perrin said 95 percent of purchases made on the Web site are from new customers.

Cartier is making several product pushes this year. One is an expanded Trinity collection, which first appeared in 1924. The key theme in the collection is a three-banded ring consisting of platinum (a symbol of friendship), rose gold (for love) and yellow gold (for fidelity). The style has been made famous by icons such as Yves Saint Laurent, Jean Cocteau, David Bowie and Madonna, who all have worn the rings.

Perrin outlined his goals succinctly: “To maximize the short term and make sure shareholders are happy. It’s all about the clients, making sure we live up to customer satisfaction.”