Umberto Angeloni's plans for the high-end men's brand include adding wholesale distribution in the U.S. and expanding beyond tailored clothing. 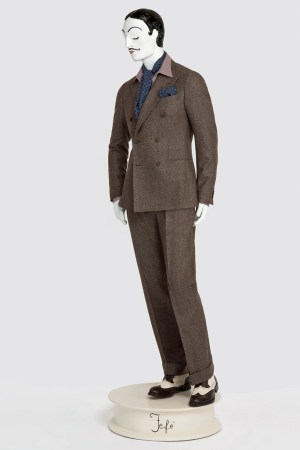 Umberto Angeloni has big plans for the Caruso label.

This story first appeared in the August 1, 2013 issue of WWD. Subscribe Today.

The plans include adding wholesale distribution in the U.S., expanding product offerings beyond tailored clothing, opening retail stores and expanding into China.

In March, Raffaele Caruso SpA was delisted from the Milan Stock Exchange after Angeloni, through Aplomb Srl, his partnership with Ruggero Magnoni, amassed a 92 percent stake in the high-end men’s brand. “I’m in the process of buying the remaining shares,” he said Wednesday from his office in Italy. He said six small regional banks are the only remaining shareholders, “and now that the company is private, it makes no sense [for them to retain their position], so we’re buying them out.”

In addition, the Caruso family is no longer involved with the brand, which was started in 1958, he said. “The family was not able to provide it with presence,” he said.

Instead, Angeloni has put plans in motion to heighten the brand’s exposure — albeit in a slow, conservative way.

He said the first move was to install a complete management team, including a head of production. In addition to the Caruso label, the company manufactures for a large number of high-end labels, including Dior and Lanvin.

Angeloni said the manufacturing arm, which employs 700 people, remains a primary mission of the company.

“But the other half of the mission is to develop the Caruso brand at wholesale, and eventually retail,” he said. The brand is 100 percent wholesale right now, and last year it had sales of 64.4 million euros, or $85.4 million at current exchange, its best year to date.

This week, the Bloomingdale’s flagship on 59th Street in New York, as well as its San Francisco unit, installed soft shops for the Caruso label. Caruso is also available at Neiman Marcus in the U.S.

“Bloomingdale’s is focused on introducing newness and quality when it comes to our merchandise, which is paramount to our brand,” said Scott Polworth, vice president and divisional merchandise manager of men’s tailored clothing for the retailer. “Caruso brings a stylish sensibility and excellent craftsmanship to the tailored offerings in our men’s store, and we are pleased to have it in both our 59th Street and San Francisco stores.”

The tailored clothing sells for $1,500 to $1,900 off-the-rack, and made-to-measure is also available. Prices can rise to $2,500 to $3,000, however, depending upon fabric. Angeloni pointed to the Quattroventi super 150s merino wool from Loro Piana as among the highest-priced offerings.

What sets Caruso apart from the other luxury Italian labels in the market is its expertise in manufacturing, Angeloni said.

“There are very few Italian brands that have proprietary manufacturing, design and fabrics” that can also boast that they offer “truly tailored power suits made in Italy,” Angeloni said. “And it’s not a made-up brand. It has a heritage and a provenance,” he added.

All told, Angeloni said, Caruso is sold at 300 stores worldwide and is available in Europe, Japan and Hong Kong. “But we have no presence in China,” he said. “And that is a market that has propelled some businesses and sustained others.”

He said the plan is to “make Caruso more visible,” but expanding distribution will be done through a “rifle approach, not a shotgun approach. We’re not aiming for the masses.” In addition to adding select wholesale partners, Angeloni said he hopes to find a location for a shop in the U.S. within 24 months. “And it will be in New York, there’s no other place,” he said.

Milan is also a possibility for a retail store, followed by China by the second half of 2014. “There are no multibrand stores in China for our channel,” he said. “So we need our own retail, and it doesn’t make sense to open a shop in China before there are shops in Milan or the States or Tokyo.”

When the stores are added, it will necessitate Caruso offering more than just tailored clothing. Although the brand has a smattering of dress shirts, ties and outerwear, Angeloni wants to complete the offering with knitwear, leather goods and other accessories, including a more complete selection of sportswear and furnishings.