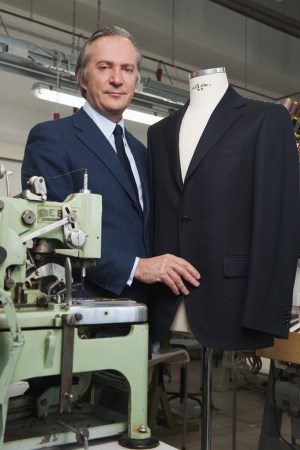 NEW YORK — Umberto Angeloni is poised to make a major statement with his Caruso brand.

The chairman, chief executive officer and majority shareholder of Raffaele Caruso SpA, has leased some 11,000 square feet at 45 East 58th Street here, across the street from the Four Seasons hotel, where he will open an Italian “oasis” this fall.

The site, which was the former home of the Spanierman Gallery, will include a retail store, showroom and offices for the Italian luxury brand. Spanierman called the large space home for more than 30 years. The entrance is a gray limestone Baroque-style door, and there will be three windows on the street level.

“It will be a bit of Italy in Manhattan,” Angeloni said during a walk-through of the raw space on Wednesday. “We’re using materials that have never been used in America before.”

Caruso has hired Milan architect and artist Edgar Vallora to work on the concept as well as New York-based architect Janson Goldstein. The general contractor is Michilli Inc., which has worked with companies including Giorgio Armani, Brunello Cucinelli and Bergdorf Goodman.

In anticipation of the opening of the flagship — scheduled for mid-September — Caruso has pulled its brand from the U.S. market where it had been sold at Bloomingdale’s and Neiman Marcus.

“The product we will be featuring will be the next level of production,” he said. “Through the Caruso shops, we’ll be introducing a quality that has never been done before.” A super-150s suit in Loro Piana’s Quattroventi merino wool, for example, will retail for about $3,800. “It will be a very sartorial suit, yet much more fluid and contemporary,” he said. The prices put it about 25 percent or more below that of competitor Brioni, where Angeloni had spent several years as ceo.

Clothing will encompass the majority of the offering in the new flagship, although shirts, ties, belts and sportswear will also be sold. “It will have everything but footwear and small leather goods,” Angeloni said. “But we’re a clothing brand, and anything we offer will be a complement to the clothing.”

Last March, Raffaele Caruso SpA was delisted from the Milan Stock Exchange after Angeloni, through Aplomb Srl, his partnership with Ruggero Magnoni, took the company private. In September, an investment fund managed by the Chinese investment group Fosun International Ltd. took a 35 percent stake in the high-end Italian men’s wear label and revealed plans to open flagships in key locations globally and to enter the Chinese market. Currently, the brand is carried in 200 multibrand stores worldwide, 100 of which are in Italy.

Angeloni said the New York store is just the first of many for the label. “We will be opening one store every six months,” he said. Next up will probably be Milan, followed by Germany, London, Paris, Dubai, Hong Kong, Tokyo, Beijing and Shanghai, he said. “Internationally, we will target markets with strong local business,” he said, “places where they appreciate quality.”

Angeloni said the New York store will be a showcase for the brand and its Made in Italy production; Caruso boasts 600 skilled seamstresses and master tailors in its home country.

“We consider ourselves an authentic luxury Italian brand,” he said. “And the customer we want to seduce and make happy is the Italian. That’s our target. He knows quality and value. And if we can satisfy him, we can satisfy sophisticated clients anywhere.”

To appeal to this customer, Angeloni is spending a reported $3 million to construct an Italian palace in midtown Manhattan. The company has commissioned wood artist Giuseppe Amato to reinterpret a traditional terrace of an Italian palazzo overlooking a Renaissance garden. The terrace will be positioned at the end of a 60-foot hallway around 12 wooden columns that will house museum-quality artwork specially commissioned for the space. All of the materials used in the store will come from Italy and will include oak flooring and terra-cotta tiles from the Po River near Soragna, Italy, where Caruso was founded in 1958.

The store will include a 1,300-square-foot suit room as well as a 400-square-foot VIP room. Fittingly, the VIP room will be a tribute to the Teatro alla Scala in Milan, with a velvet curtain and memorabilia from one of the theater’s boxes.

The store will introduce two special fabrics: Trio, a blend of mohair, silk and wool, and Ideale, a four-ply, super-180s wool. “We invest up to 5 percent of our sales a year on research and development,” Angeloni said. “And we’re launching these two fabrics here because we believe they should be the staple of every man’s wardrobe.”

The location will also include a 3,000-square-foot showroom where Caruso can show its brand to select customers. Angeloni said that although the line is intentionally not being sold in the U.S. at this time, once the store opens, “we will be happy to enter multibrand stores going forward. This is a big statement. Let them come and see the product and presentation, then we’ll be more than happy to let them carry it.”

Offices, a tailor shop, a kitchen and a 1,700-square-foot basement will complete the package.

The store will be located across the street from the new Kiton unit (see related story on this page), as well as the Tao and Lavo restaurants and clubs. It is located on the other side of the hotel from the Brioni store.

Angeloni said marketing for the Caruso store will be mainly word-of-mouth along with “targeted media.” But he’s not worried if the word gets out slowly. “We signed a 20-year lease, so we’re not in a rush,” he said.

Faith Hope Consolo, chairman of the Retail Group of Douglas Elliman Real Estate, which negotiated the deal, said opening the store puts Caruso “in the Plaza District and it reads Madison Avenue. It can’t miss.” Calling Angeloni a “visionary who saw the potential of the location,” she said there were a lot of other companies vying for the space, but the building’s owner liked the quality of the offering and thought it would attract “the right traffic and the right customer. He’s got a big following among investment bankers and lawyers.”

In addition to its namesake label, Caruso manufactures for a large number of high-end brands, including Dior and Lanvin.